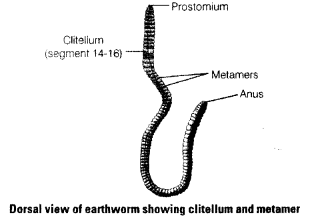 Question 2.
Where are sclerites present in cockroach?
Solution:
In all the body segments of cockroach sclerites are present. They are of two types dorsal sclerites often known as tergites, and ventral sclerites which are referred to as sternites.

Question 3.
How many times do nymphs moult to reach the adult form of cockroach?
Solution:
The nymph grows by moulting about 13 times to reach. In cockroach’, the development is indirect and paurometabous adult form has three stages, i.e., egg, nymph and adult. The nymph resembles adult except/or undeveloped wings and genitalia.

Question 8.
Which mouth part of cockroach is comparable to our tongue?
Solution:
In cockroach, hypopharynx acts as a tongue and lies within cavity enclosed by the mouth parts.

Question 9.
The digestive system of frog is made of the following parts. Arrange them in an order beginning from mouth. Mouth, oesophagus, buccal cavity, stomach, intestine, cloaca, rectum, cloacal aperture.
Solution:
The correct arrangement of the part of digestive system in frog is
Mouth —> Buccal cavity —> Oesophagus —> Stomach —>Intestine —> Rectum —> Cloaca —> Cloacal aperture.

Question 1.
Stratified epithelial cells have limited role in secretion. Justify their role in our skin.
The edible part of the peach or pear pome fruit for the fleshy thalamus.
Solution:

Question 2.
How does a gap junctions facilitate intercellular communication ?
Solution:
Intercellular communication is facilitated by gap Junction allowing small signaling molecules to pass from cell to cell.
These are fine hydrophilic channels, between two adjacent animal cells that are formed with the help of two protein cylinders called connexus.
Each connexus consists of six proteins subunits that surround a hydrophilic channel. Opening or closing of channel is controlled by pH and Ca2+ ion concentration.

Question 4.
How do you distinguish between dorsal and ventral surface of the body of earthworm?
Solution:
The body of an earthworm can be distinguished into dorsal and ventral sides due to the presence of certain peculiar feature in it which include the following.
(i) The dorsal surface is darker than ventral surface because it is marked by a dark median mid dorsal line along the longitudinal axis of body. This is due to dorsal blood vessel, seen through integument.
(ii) Genital openings (pores), are present in the ventral surface of both male and female.
(iii) On vental surface genital papilla is located and helps in copulation. 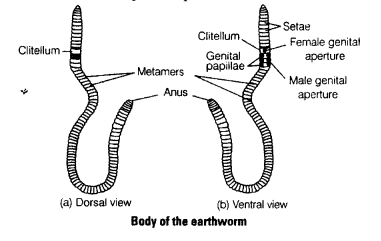 Question 5.
Complete the following statement.
(a) In cockroach grinding of food particle is performed by ……..
(b) malpighian tubules help in removal of …….
(c) Hind gut of cockroach is differentiated into……
(d) In cockroach blood vessels open into spaces called ……
Solution:
(a) Gizzard is a muscular and greatly folded structure which marks the end of foregut in cockroach and bears six plates with teeth for crushing and grinding the food.
(b) Malpighian tubules are excretory in ‘ function as they help in the removal of
nitrogenous wastes in arthropods.
(c) Ileum, colon and rectum and rectum opens and through anus.
(d) Haemocoel is the body cavity of cockroach divided into sinuses and contains visceral organs of cockroach floating in haemolymph.

Question 7.
Frog is a poikilotherm, exhibits camouflage and undergoes aestivation and hibernation, how are all these benficial to it?
Solution:

Question 8.
Write the functions in brief in Column II, appropriate to the structures given in column I.

Solution:
(a) Nictitating Membrane in frog protects the eye from water and any damage by covering the eye ball of frog.
(b) Tympanum is present on each side of the frog head and is involved in the hearing process.
(c) Copulatory Pad present in the limbs of the male frog and helps in copulation by holding the female during its sexual activity.

Question 10.
What is special about tissue present in the heart?
Solution:
Special tissue present in heart is called cardiac muscle, which has the following features
(i) Cardiac muscle fibres are supplied with both central and autonomic nervous system and are not under the control of will of animal.
(ii) These muscles show rhythmicity and are immune to fatigue.
(iii) They have a rich supply of blood.
(iv) They are myogenicas. They possess the property of contraction even if completely isolated from the body. 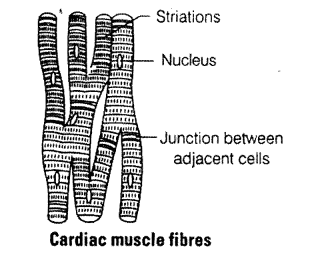 Question 1.
Comment upon the gametic exchange in earthworm during mating. Discuss the physiology in reproduction of earthworm.
Solution:
In earthworm mating is a unique process. Earthworm is a hermaphrodite. In which breeding takes place during rainy season and copulation begins soon after maturation of the sperms.
The gametic exchange and the physiology of reproduction during mating can described in the following manner.
(i) Earthworms are protandrous animal (i.e., maturation of sperm takes place much earlier then that of ova).
(ii) Mating process in earthworm occurs through process of cross-fertilisation.
(iii) The mating process involves exchange of gametic materials between the two worms.
(iv) Two individuals from adjacent burrows emerge half but and lie in contact with each other, and exchange packets of sperms called spermatophores opposite gonadal opening.

(v) The skin encircling male pore, elevates a little during the process to form a temporary papilla that fits like a penis into the opposite spermathecal pore to keep it open.
(vi) The copulating worm after filling of spermatheca moves a bit to adjust another pair of spermathecae to face the other male pores. This is accomplished in about an hour’s copulation.
(vii) The sperms mostly remain in their diverticula within the spermathecae and the ampulla is associated with the secretion of nutritive substances for the sperms.
(viii) The sperm and egg are passed into cocoon, secreted by clitellar gland.
(ix) Fertilisation is therefore external.

Question 2.
Explain the digestive system of cockroach with the help of labelled sketch.
Solution:
The alimentary canal of cockroach is divided
into three regions foregut, midgut and hindgut.
(i) Mouthy cavity, pharynx, oesophagus, crop and gizzard are included in foregut.
(ii) Mouth cavity is a small space, surrounded by mouth parts. Food is crushed and acted upon by the salivary secretion in mouth.
(iii) The mouth opens into a short tubular pharynx, leading towards the narrow tubular passage called oesophagus and then into a sac-like structure called crop which acts as a storage organ. 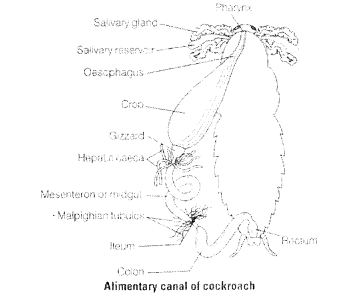 (iv) The crop is followed further by gizzard ‘ (proventriculus). Gizzard is composed of thick circular muscles and thick inner cuticle forming six highly chitinous plates called as teeth. It associated with the grinding and crushing of food particles. A thick cuticle lines the entire foregut.
(v) About one-third middle part of alimentry canal comprises of midgut or mesentron. The internal lining of midgut is an endodermal epithelium of columnal cells raised into several small villi like folds.
(vi) Anterior most part of midgut surrounding the stomadaeal valve is called cardia. Finger like blind processes called as enteric or hepatic caeca are present at the junction of foregut and midgut.
(vii) A ring of yellow filamentous structures is formed between the midgut and hindgut that aid in the removal of excretory products from haemolymph.
(viii) The remaining one-third posterior part of alimentary canal is Hindgut. It is relatively thicker than the midgut lined by cuticle and ectodermal epithelium.
(ix) Hindgut is diffrentiated into three parts anterior Ileum, middle colon and posterior rectum. Ileum is short and relatively narrower and its cuticie bears minute spines. Colon is the longest, relatively thicker and a coiled part of hindgut. Rectum is a small and oval chamber that opens out through anus.