(2) Differentiation: The cells derived from root apical and shoot apical meristems and cambium differentiate and mature to perform specific functions. This act leading to maturation is termed differentiation. They undergo a few or major structural changes both in their cell walls and protoplasm. For example, to form a tracheary element, the cells would lose their protoplasm.

(3) Development: Development is a term that includes all changes that an organism goes through during its life cycle from germination of the seed to senescence. It is also applicable to tissues/organs.

(5) Redifferentiation: While doing so, such meristems/ tissues are able to produce cells that once again lose the capacity to divide but mature to perform specific functions, i.e., get redifferentiated. List some of the tissues in a woody dicotyledonous plant that are the products of redifferentiation.

(6) Determinate growth: The growth in plants is open i.e. it can be indeterminate or determinate. Even differentiation in plants is open because cells tissues arising out of the same meristem have different structures at maturity. The final structure at maturity of a cell/’ tissue is also determined by the location of the cell within. For example, cells positioned away from root apical meristems differentiate as rootcap cells, while those pushed to the periphery mature as the epidermis.

(7) Meristem growth: The constantly dividing cells, both at the root apex and shoot apex, represent the meristematic phase of growth.

(8) Growth rate: The increased growth per unit time is termed as growth rate. Thus, the rate of growth can be expressed mathematically. An organism or a part of the organism can produce more cells in a variety of ways. The growth rate shows an increase that may be arithmetic or geometrical.

Question 2.
Why is not any one parameter good enough to demonstrate growth throughout the life of a flowering plant?
Solution:
In plants, growth is said to have taken place when the number of protoplasm increases. Measuring the growth of protoplasm involves many parameters such as weight of fresh tissue sample, the weight of dry tissue sample, differences in length, area, volume and cell number measured during the growth period. Measuring the growth of plants using only one parameter does not provide enough information and hence, is insufficient for demonstrating growth.

Question 3.
Describe briefly:
(a) Arithmetic growth
(b) Geometric growth
(c) Sigmoid growth curve
(d) Absolute and relative growth rates
Solution:
(i) Arithmetic growth: In this type of growth after mitosis, only one daughter cell continues to divide while the others take part in differentiation and maturation e.g., root elongating at constant rate. Here a ‘linear curve is obtained.
(ii) Geometric growth : In most systems, the initial growth is slow (lag phase), and it increases rapidly thereafter – at an exponential rate (log or exponential phase), Here both the progeny cells following mitotic cell division divide continuously.
(iii) Sigmoid growth curve : Sigmoid or S-shaped growth curve consists of three phases i.e., lag phase, log phase and stationary phase. During lag phase plant i growth is slow (in phase of cell division), but increases at log or exponential phase , (due to cell enlargement). During stationary phase the growth again slows down due f to the limitation of nutrients.
(iv) Absolute and relative growth rates : Measurement and comparison of total growth per unit time is called the absolute growth rate. The growth of the given system per unit time expressed on a common basis e.g., per unit initial parameter is called the relative growth rate,

Question 4.
List flve main groups of natural plant growth regulators. Write a note on discovery, physiological functions and agricultural/ horticultural applications of any one of them.
Solution:
The five main groups of natural growth regulators are
(a) auxins
(b) gibberellins
(c) cytokinins
(d) ethylene
(e) abscisic acid
Gibberellins
Discovery: – They are another kind of promotory PGR. There are more than 100 gibberellins reported from different organisms such as fungi and higher plants. They are denoted as GA1, GA2, GA3. E. Kurosawa reported the symptoms of the disease r in infected rice seedings when they were treated with filtrates of the fungus. Gibberalla fujikuroi caused, ‘bakane’ (foolish seedling) a disease of rice seedlings. The active substances were later identified as gibberellic acid.
Physiological functions
(i) They cause an increase in length of axis is used to increase the length of grapes stalk.
(ii) Gibberellins cause fruit like apple to elongate and improve its shape.
(iii) They also delay senescence. Thus the fruits can be left on the tree longer so as to extend the market period.
Agricultural Applications
(i) Spraying sugarcane crop with gibberellins increases the length of stem. Thus increasing the yield as much as 20 tonnes per acre.
(ii) Spraying juvenile conifers with GAs hastens the maturity period, thus leading to early seed production.
(iii) Gibberellins also promotes bolting (internode elongation just prior to flowering) in beet, cabbages and many plants with rosette habit.

Vernalisation is the cold-induced flowering in plants. In some plants, exposure to low temperatures is necessary for flowering to be induced. The winter varieties of rye and wheat are planted in autumn. They remain in the seeding stage during winters and flower during summers. However, when these varieties are sown in spring, they fail to flower.

Question 6.
Why is abscisic acid also known as stress hormone?
Solution:
Abscisic acid is known as the stress hormone because it stimulates the closure of stomata in the epidermis and increases the tolerance of plants to various kinds of stresses.

Question 8.
‘Both a short day plant and a long day plant can flower simultaneously in a given place’. Explain.
Solution:
There are two different plants one is Oat which is a long-day plant and the other one is Xanthium which is a short-day plant. Both have different photoperiods i.e. 9 hrs in Oat and 15.6 hrs in Xanthium. At 9.5 hrs both Oat and Xanthium will be flowering simultaneously.

Question 9.
Which one of the plant growth regulators would you use if you are asked to:
(a) induce rooting in a twig
(b) quickly ripen a fruit
(c) delay leaf senescence
(d) induce growth in axillary buds
(e) ‘bolt a rosette plant’
(f) induce immediate stomatal closure in leaves.
Solution:
(a) Auxin
(b) Ethylene
(c) Cytokinin
(d) Cytokinin
(e) Gibberellin
(f) Abscisic acid

Question 10.
Would a defoliated plant respond to the photoperiodic cycle? Why?
Solution:
The flowering in certain plants depends not only on a combination of light and dark exposures but also on their relative durations. This is a photoperiodic cycle. Because, while shoot apices modify themselves into flowering apices prior to flowering, they (i.e., shoot apices of plants) by themselves cannot perceive photoperiods. The site of perception of light/ dark duration is the leaves. It has been hypothesized that there is a hormonal substance(s) called florigen that is responsible for flowering. Florigen migrates from leaves to shoot apices for inducing flowering only when the plants are exposed to the necessary inductive photoperiod.

Question 11.
What would be expected to happen if:
(a) GA3 is applied to rice seedlings
(b) dividing cells stop differentiating
(c) a rotten fruit gets mixed with unripe fruits
(d) you forget to add cytokinin to the culture medium.
Solution:
(a) It causes elongation of stems and leaf sheaths.
(b) A callus of the undifferentiated cells will be produced.
(c) It stimulates the ripening of unripe fruits.
(d) It inhibits the growth of callus.

Question 1.
What is the full form of IAA?
Solution:
Indole acetic acid

Question 5.
In a wheat field, some broad-leaved weeds were seen by a farmer. Which plant hormone would you suggest to get rid of them?
Solution:
2,4-dichloro phenoxy acetic acid (2,4-D)

Question 6.
A farmer grows cucumber plants in his field. He wants to increase the number of female flowers in them. Which plant growth regulator can be applied to achieve this?
Solution:
Ethylene

Question 7.
What is the result of the addition of gibberellins to plants? (Oct. 91)
Solution:
Bolting

Question 12.
Define climacteric.
Solution:
Climacteric refers to the increased rate of respiration during the ripening of fruits.

Question 1.
List some structural modifications which occur during cell differentiation.
Solution:
During differentiation, cells undergo few to major structural changes both in their cell walls and
protoplasm. For example, to form a tracheary element, the cells would lose their protoplasm. They also develop very strong, elastic, lignocellulosic secondary cell walls, to carry water to long distances even under extreme conditions.

Question 2.
How do you induce lateral branching in a plant which normally does not produce them? Give reasons in support of your answer.
Solution:
Apical bud checks the sprouting of lateral buds due to the presence of auxins. When the apical bud is removed, lateral branches are produced. Due to the removal of apical bud effect of auxins is destroyed inducing the lateral buds to grow rapidly.

Question 5.
Define plasticity.
Solution:
Plants follow different pathways in response to the environment or phases of life. It leads to formation of different structures. This ability is called plasticity.

Question 6.
What is growth? How will you measure the rate of growth?
Solution:

Question 7.
Explain the different phases of growth with the help of a diagram.
Solution:
The period of growth is generally divided into three phases – meristematic, elongation, and maturation.
Meristematic phase: The constantly dividing cells, both at the root apex and the shoot apex, represent the meristematic phase of growth. The cells in this region are rich in protoplasm possess large conspicuous nuclei.

Their cell walls are primary in nature, thin, and cellulosic with abundant plasmodesmatal connections.

Elongation phase: The cells proximal to the meristematic zone represent the phase of elongation.

Increased vacuolation, cell enlargement, and new cell wall deposition are the characteristics of the cells in this phase.

Maturation phase: The cells of this zone, attain their maximal size in terms of wall thickening and protoplasmic modifications. 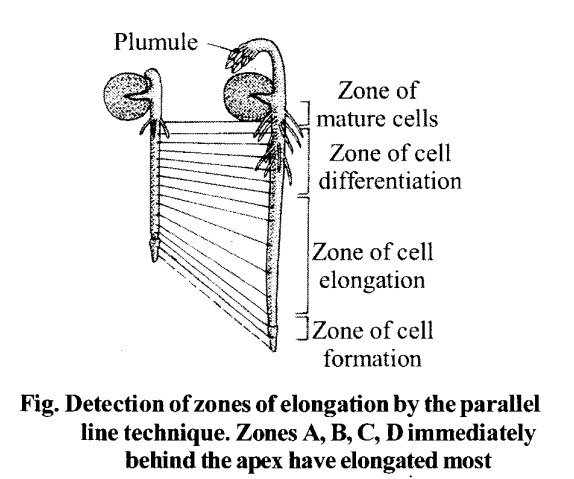 (a) Phase of cell division or cell formation:
This region is located at the tip of shoot and root. It is represented by the apical meristem capable of rapid cell division. The cells are undifferentiated, with a thin cell wall made of cellulose, with an active protoplasm and prominent nucleus. This region is mainly concerned with cell division.

(b) Phase of cell elongation or cell enlargement: This region lies next to the cell formation zone. The cells enlarge because of their elastic cell walls. Growth takes place during this stage either by apposition or intussusception. Cells are turgid.

(c) Phase of cell differentiation or cell maturation: This represents the last region and differentiation based on functions is seen here. Secondary walls are laid down where some have additional deposits of lignin, Suberin, and others lose their protoplast and become dead.

Question 9.
Where are auxins synthesized in plants? Mention any two of their functions.
Solution:
Auxins are produced in the growing shoot apices and root apices.
Functions of auxins are as follows :
(i) Auxins control apical dominance, i.e., they suppress the growth of lateral buds into branches.
(ii) They help to prevent fruit and leaf drop at early stages but promote the abscission of older mature leaves and fruits.

Question 13.
What is ethephon? How does it function in plants? Give any two of its functions.
Solution:
Ethephon:

Functions of ethephon are as follows:

Question 14.
Discuss the practical applications of auxins in Agriculture and Horticulture. (Oct. 96) OR What are auxins? Explain briefly uses of Auxins. (Oct. 99)
Solution:
Auxins are a group of plant growth substances, acidic in nature and bring about over-all growth. 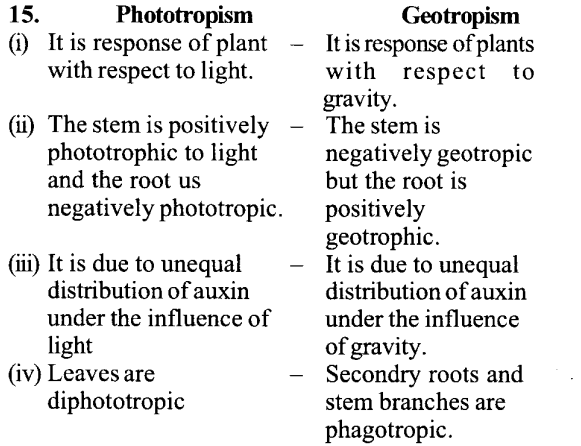 Question 16.
What are Terpenoids?
Solution:
Terpenoids are derivatives of terpenes, includes abscisic acid and gibberellin and the carotenoid and chlorophyll pigments.

The significance of vernalization is as follows:

Thus, more than one crop can be obtained during a year.

Question 2.
Discuss the role of auxins in plant growth.
OR
Describe any four physiological effects of auxins. (Oct. 89, 2001)
Solution: