Question 1.
Mention a single membrane bound organelle which is rich in hydrolytic enzymes.
Solution:
The membrane bourld vesicular structures formed by Golgi apparatus are Lysosomes. These vesicles have been found to be rich in all types of hydrolytic enzymes as hydrolase, lipases, proteases and carbohydrases which digest carbohydrates proteins, lipids and nucleic acid at an acidic pH.

Question 2.
What are gas vacuoles? State their functions.
Solution:
Gas vacuoles also known as pseudovacuoles or air vacuoles are the characteristic feature 1 of prokaryotes. They store metabolic gases and take part in regulation of buoyancy.

Question 3.
What is the function of a polysome? (Gk. Poly – many, Soma = body).
Solution:
A polysome consists a cluster of ribosomes that are held simultaneously by a strand of messenger KNA in rosette or helical group. They contain a portion of the genetic code that each ribosome is translating and are used in formation of multiple copies of same polypeptide. They are found in the cyloplasm during the process of active protein synthesis. 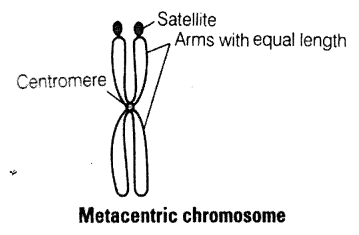 Question 1.
Discuss briefly the role of nucleous in the cells activity involved in protein synthesis.
Solution:
The round, naked and a slightly irregular structure, which is attached to the chromatin at a specific region called as Nucleolar Organizer Region (NOR). Nucleous was first discovered by Fontana (1781).

The role of nucleolus can be described as:
(i) Nucleolus is the chief site for the synthesis of ribosomal RNA.
(ii) It is the centre for the formation of ribosome components.
(iii) It is the colloidal complex that fills the nucleus.
(iv) It combines rRNA with proteins to produce ribosomal sub-units. The ribosomes sub-units after their formation pass out and get established in the cytoplasm.
(v) It also receives and stores ribosomal proteins formed in the cytoplasm.
(vi) These ribosomal proteins formed are the sites for protein synthesis in the cell.
(vii) Nucleolus is essential for spindle formation during nuclear division as well.

Question 2.
Explain the association of carbohydrate to the plasma membrane and its significance.
Solution:

Question 3.
Briefly describe the cell theory.
Solution:
Schleiden and Schwann formulated the cell theory, in 1938-39 which stated
(i) All living beings are made up of cells and products formed by the cells.
(ii) Cells are the structural and functional units oflife
The cell theory stated by Schleiden and Schwann failed to explain the question of origin of cells.
A major expansion of the cell theory was expressed by Virchow in his statment ‘Omnis cellula e cellula’ (all cells arise from pre-existing cells) in 1855.
This concept, was the actual idea of Nagelli (1846), which later on was elaborated by Virchow, along with considerable evidences in its support. The work of Nagelli and Virchow established cell division as the central pehnomenon in the continuity oflife.
The modem cell theory is thus based on two facts
(i) All living organisms are composed of cells and products of cells.
(ii) Cells are the basic structural and functional units oflife.
(iii) All cells arise from pre-existing cells. Vimses are exception to cell theory as they are .pot composed of cell. They consist of a nucleic acid (DNA or RNA) surrounded by a protein sheet and are incapable of independant existence, self regulation and self reproduction. 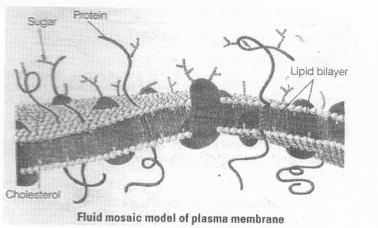 The lipid molecule possess both polar hydrophilic (water loving) and non-polar hydrophobic (water repelling) ends. The hydrophilic region is in the form of a head, while the hydrophobic part contains fatty acid tails. Hydrophobic tail is present towards the centre of the membrane. This structures results is the formation of lipid bilayer known as unit membrane/biological membrane/cell membrane. Proteins are embedded within the lipid bilayer – Carbohydrates are structure upon proteins.

Question 5.
What are plasmids? Describe their role in bacteria.
Solution:

Question 1.
Is there a species specific or region specific type of plastids? How does one distinguish one from the other?
Solution:
Plastids are specific to different species and are found in all plant cells and in euglenoids. They bear certain pigments that impart specific colour^ to the part of the plant possesing them. Plastids ar classified into three main types, based on the type of pigments- leucoplasts, chromoplast and chloroplast.
Leucoplasts are colourless plastids which store food material. They are of three types based on their storage products.
(a) Amyloplasts store starch, e.g., tuber of potato, grain of rice, grain of wheat.
(b) Elaioplasts store fats, e.g., rose
(c) Aleuropiasts are protein storing plastids, e.g., castor endosperm.
Chromoplast are non photosynthetic coloured plastids which synthesise and store carotenoid pigments. They appear orange, red or yellow. These mostly occur in ripe fruits (tomato and chilies) carrot roots, etc.
Chloroplasts are green color plastids which help in synthesising food material by photosyntheis. They contain chrophyll and carotenoid pigments which trap light energy.
Each chloroplast is oval or spherical, double membrane bound cell organelle. The space present inside inner membrane is called stroma Anumberrof oiganised flattenedmembranous sacs called thylakoids are present in the stroma. Thylakoids are arranged in stacks called grana.
The thylakoids of different grana are connected by membranous tubules called the stroma lamellae. The stroma of the lamellae contain the enzymes that are required for the synthesis of carbohydrates and proteins.

Question 2.
Write the functions of the following
(a) Centromere
(b) Cell wall
(c) Smooth ER
(d) Golgi apparatus
(e) Centrioles
Solution:
(a) Centromere is required for proper chromosome segregation. The centromere consists of two sister chromatids. It is also necessary for attachment of chromosomes to the spindle apparatus during mitosis and meiosis. 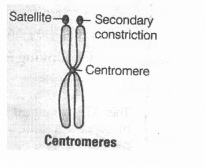 (b) Cell wall gives a definite shape to the cell 1 and protects the cell from mechanical injury
and infections. It also aids in cell to cell interaction and acts as a barrier for undesirable macromolecules.
(c) Smooth ER helps in synthesis of lipids, metabolism of carbohydrates, regulation of calcium concentration, drug detoxification and attachment of receptors on cell membrane proteins.
The smooth ER also contains enzymes- glucose 6 phosphatase, which converts glucose 6 phosphate to glucose essential in glucose metabolism. (d) Golgi apparatus is an important site for the formation of glycoprotein and glyco lipids also involved in the synthesis of cell wall materials and plays an important role in formation of cell plate during cell divisionas well. 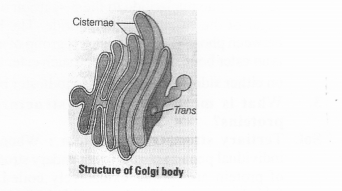 (e) Centrioles form the base body of cilia and flagella and spindle fibres that gives rise to spindle apparatus during cell division in ‘animal cells. They help in formation of microtubules and sperm tail. They also help in cell division by forming asters, which acts as spindle pole.