Question 1.
Name the cells/ tissues in human body which
(a) exhibit amoeboid movement
(b) exhibit ciliary movement
Solution:
(a) Macrophages and leucocytes in blood exhibit amoeboid movement. Cytoskeletal elements like microfilaments are also involved in amoeboid movement.
(b) Ciliary Movement occurs mostly in the internal organs, lined by the ciliated epithelium, e.g., cilia in trachea helps in removing dust particle and foreign substances inhaled along with atmospheric air.
Passage of ova through the female reproductive tract is also facilitated by the ciliary movement. This is due to the presence of ciliated epithelium in the Fallopian tube.

Question 4.
Label the different components of actin filament in the diagram given below

Solution:
Each actin filament is made of two ‘F (filamentous) actins helically wound to each other and each ‘F’ actin is a polymer of monomeric ‘G’ (globular) actins.
The different components of action filament can be represented as 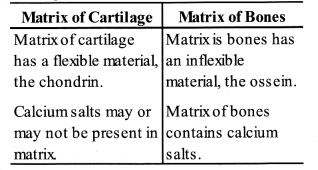 Question 6.
Which tissue is affected by mysthenia gravis? What is the underlying cause.
Solution:
Myasthenia gravis is autoimmune disorder of skeletal muscle, which affects neuromuscular junction, that leads to fatigue, weakening and paralysis of the skeletal muscle.

Question 1.
With respect to rib cage, explain the following
(a) bicephalic ribs
(b) true ribs
(c) floating ribs
Solution:
There are 12 pairs of ribs. Each rib consist of a thin flat bone dorsally connected to the vertebral column and ventrally to the sternum.
(a) Bicephalic ribs each rib has two articulating surfaces on its dorsal end hence, are called as bicephatic ribs.
(b) The first seven pairs of ribs are true ribs. These ribs are dorsally attached to the thoracic vertebrae and ventrally connected to the sternum with the help of hyaline cartilage.
(c) The last two pair (11th and 12th) of ribs are not connected ventrally to the sternum therefore, called as floating ribs. 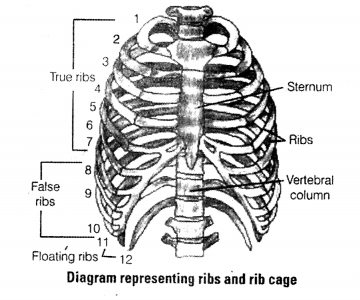 Question 4.
Radha was running on a treadmill at a great speed for 15 minutes continuously. She stopped the treadmill and abruptly came out. For the next few minutes, she was breathing heavily/fast. Answer the following questions.
(a) What happened to her muscles when she did strenuously exercised?
(b) How did her breathing rate change?
Solution:
(a) Her muscles got fatigues due to continuous exercise because of the accumulation of lactic acid within skeletal muscles. Pain is also often experienced in the fatigued muscles.
(b) Her breathing rate changes from normal to
high as during as her body muscles require thus oxygen for the ATP production, than the normal value, her breathing thus enhances, to take most oxygen from the atmosphere.

Question 5.
Write a few lines about gout.
Solution:
Gout is a disease caused due to improper purine metabolism. It causes accumulation of uric acid and its crystals in the joints. The level of uric acid and crystals of its salts get raised in blood causing their accumulation in the joint to which causes gouty arthritis. The excess of urates in blood can also lead to the formation stones in the kidneys.

Question 6.
What are the points for articulation of pelvic and pectoral girdles?
Solution:

Question 1.
How does a muscle shorten during its contracting and return to its original form during relaxation?
Solution:
Muscles contract due to formation of cross-bridge between the actin and myosin filament
(i) An ATP molecule j oins the active site on the head of myosin myofilament. These heads contains an enzyme, myosin ATPase along with Ca2+ and Mg2+ ions that catalyses the break down of ATP.

(ii) The energy is transferred to myosin head which straightens to join an active site on actin myofilament, forming a across-

(iii) The energised cross-bridges move, causing the attached actin filaments to move towards the centre of A-band. The Z-line is also pulled inwards causing shortening of sarcomere, contraction. During contraction A-bands retain the length, while I-bands get reduced.
(iv) The myosin head releases ADP and Pi where relaxes to its low energy state. The head detaches from actin myofilaments when new ATP molecule joins it and cross-bridge are broken.
(v) In the next cycle, the free head cleaves the new ATP. The cycles of cross-bridge formation and breakage is repeated causing further sliding.

(vi) After contraction muscle relaxation occurs when the calcium ions are pumped back to the sarcoplasmic cistemae, thus, blocking the sites on actin myofilaments. The Z-line returns to original positions or relaxation.