Question 3.
volume Diffusion of gases occurs in the alveolar region only and not in the other parts of the respiratory system. Why?
Solution:
Alveoli are the primary sites of the exchange of gases. The alveolar region is having enough pressure gradient to facilitate the diffusion of gases. Other regions of the respiratory system don’t have the required pressure gradient. Additionally, the membrane of alveoli is thin enough to facilitate the exchange of gases in a convenient manner. 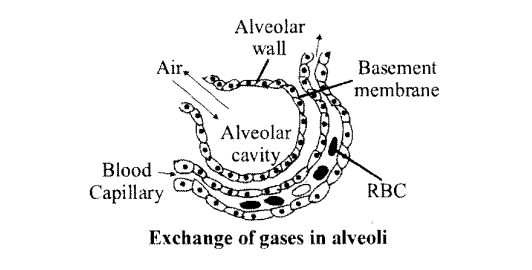 Question 4.
What are the major transport mechanisms for CO2? Explain.
Solution:
Transport of carbon dioxide: About 4 ml of carbon dioxide is transported by every 100 ml of blood.
C02 is transported in three forms in the blood.
(i) In the dissolved form in plasma about 7% of C02 dissolves in the plasma of blood, just as it gets dissolved in water.
(ii) As bicarbonates
Erythrocytes have a high concentration of the enzyme, carbonic anhydrase which catalyzes the following reactions;

About 70% of C02 is transported as bicarbonates.

(iii) As carbaminohaemoglobin
C02 combines with the globin part of haemoglobin and forms carbamino haemoglobin. About 23% of CO2 transported in this manner.

Question 6.
Explain the process of inspiration under normal conditions.
Solution:
The intake of air into the lungs is known as inspiration. Inspiration occurs when the pressure within the lungs is less than the atmospheric pressure. It is initiated by the contraction of the diaphragm which increases the volume of the thoracic chamber in the anteroposterior axis. The contraction of external intercostal muscles lifts up the ribs and the sternum causing an increase in the volume of the thoracic chamber in the dorsoventral axis. The overall increase in the thoracic volume causes a similar increase in pulmonary volume which decreases the intra-pulmonary pressure to less than the atmospheric pressure which forces the air from outside to move into the lungs.

Question 7.
How is respiration regulated?
Solution:

Question 8.
What is the effect of pC02 on oxygen transport?
Solution:
At low pC02, blood can carry the maximum amount of oxygen as oxyhemoglobin. At high pCO2, the affinity for oxygen decreases and oxyhaemoglobin dissociates to free oxygen.

So at high pC02, oxygen transport is inhibited.

Question 9.
What happens to the respiratory process in a man going up a hill?
Solution:
There is a fall of PO2 level at high altitudes. This lowers alveolar PO2 and consequently reduces the diffusion of oxygen from the alveolar air to the blood. So oxygenation of the blood is decreased progressively.

After some time, the affected person gets adjusted to the surroundings due to which the heart rate is accelerated, RBC count in the blood is increased, haemoglobin level and oxygen-carrying capacity are also increased.

Question 10.
What is the site of gaseous exchange in an insect?
Solution:
Insects have a complex system of intercommunicating air tubes called tracheae to enable them to exchange gases between the environment and the body cells (tracheal respiration).

Question 12.
Have you heard about hypoxia? Try to gather information about it, and discuss it with your friends.
Solution:
Hypoxia is the condition in which there is a deficiency of oxygen at the tissue level.

Question 14.
What is tidal volume? Find out the tidal volume (approximate value) for a healthy human in an hour.
Solution:
The volume of air inspired or expired/breath during normal respiration is approx. 500 ml., i.e., a healthy man can inspire or expire approximately 6000 to 8000 ml of air per minute.

Question 2.
What is carbamino haemoglobin?
Solution:
It is a complex formed by the combination of carbon dioxide with the globin part of haemoglobin.

Question 3.
What is tidal volume?
Solution:
The volume of air inspired or expired with every normal breath during effortless respiration is called tidal volume.

Question 4.
What term is used for the volume of air left in the lungs even after the most powerful expiration?
Solution:
Residual volume.

Question 7.
What are the two factors that contribute to the dissociation of oxyhaemoglobin in the atrial blood to release’ molecular oxygen in active tissue?
Solution:
The two factors are :
(a) Lowp02
(b) HighpC02

Question 8.
Name the double-walled sac which covers the lungs in mammals.
Solution:
Pleura.

Question 9.
What prevents the collapsing of our trachea during breathing ?
Solution:
C-shaped cartilages at regular intervals.

Question 11.
Which part(s) of the brain control(s) breathing movements?
Solution:
Medulla and pons.

Question 12.
What is oxyhaemoglobin?
Solution:
Oxyhaemoglobin is a complex formed when oxygen combies with the Fe2+ part of haemoglobin.

Question 13.
How much of oxygen is transported by 100 ml of blood under normal physiological conditions?
Solution:
About 5 mL.

Question 17.
What will happen if the human blood becomes acidic?
Solution:
Oxygen carrying capacity of haemoglobin will decrease.

Question 1.
Write four conditions necessary to facilitates efficient gaseous exchange between human respiratory surface and the environment.
Solution:
Conditions for efficient gas exchange are as follows:
(a) The membrane should be thin.
(b) It should be highly vascularized.
(c) It should be highly permeable to gases.
(d) There should a partial pressure difference on both sides of lung. Question 5.
Diffusion of gases occurs in the alveolar region only and not in the other parts of the respiratory system. Why?
Solution:
The alveoli have very thin walls consisting of squamous epithelium. The alveolar wall is provided with an extensive network of blood capillaries; due to the intimate contact of the blood capillaries and alveolar wall, there is an exchange of gases taking place easily. In the other part the membrane/wall is not so thin to allow for diffusion.

Question 7.
What is asthma? Explain.
Solution:
Asthma: It is the hypersensitivity of bronchioles to any foreign substance, characterized by the spasm of the smooth muscles of the walls of the bronchioles.

Question 8.
What is emphysema? What is its major cause?
Solution:
Emphysema: Emphysema is a chronic disorder is which alveolar walls are damaged and hence the surface area for exchange of. gases is reduced. It is caused mainly by cigarette smoking.

Question 9.
Draw a labelled diagram of a section of an alveolus with a pulmonary capillary.
Solution: 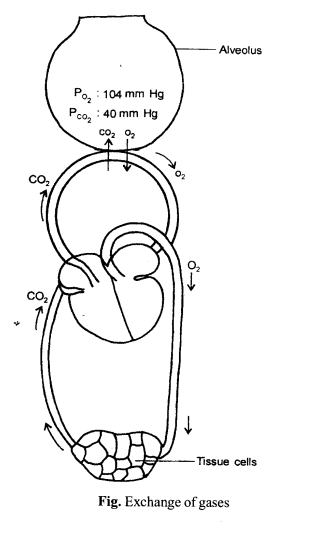 Question 10.
What will happen if the patient has been inhaling polluted air containing high content of CO?
Solution:
Hemoglobin has much more affinity about 250 times for CO than oxygen. It readily combines with CO to form the most stable compound called carboxyhemoglobin. It may be fatal for the patient.

Question 11.
What is pneumonia? What are its causes?
Solution:
Pneumonia is a respiratory disease in which oxygen has difficulty in diffusing through the flammed alveoli and the blood O2 may be drastically reduced and blood PCO2 remains normal. It is caused by streptococcus pneumonia. Its symptoms are trembling, pain in the chest, fever, cough, etc. It is mostly observed in children and old age.

Question 1.
What do you mean by occupational lung disease? Enumerate the prevention measure that should be adopted by a person likely to be exposed to substances that cause occupational diseases?
Solution:
Occupational lung disease as the name suggests it is the disease of lung due to the occupation of the human.
Cause: These are caused by harmful substances, such as gas fumes or dust, present in the environment where a person works. Silicosis and asbestoses are common examples, which occur due to chronic exposure of silica and asbestos dust in the mining industry.
Symptoms: It is characterized by the proliferation of fibrous connective tissue (fibrosis) of upper part of lung, causing inflammation.
Prevention: The occupational disease expresses symptoms after chronic exposure (i.e., 10-15 years or even more). Most of the occupational diseases including silicosis and asbestosis is are incurable. Therefore, the person which is exposed to such irritants should adopt preventive measures. These protective measures are as follows:
(i) Minimize the exposure of harmful dust at the workplace.
(ii) Workers should be informed about the harm of exposure to such dust.
(iii) Workers must have protective gear and clothing at the workplace.
(iv) health of the workers should be regularly checked up.

Question 3.
How does the exchange of respiratory gases take place in the alveoli or lungs?
Solution:
Gaseous exchange in alveoli:

Question 4.
How are inspiration and expiration take place in humans?
Solution:
The inflow (inspiration) and outflow (expiration) of air occur between the atmosphere and lungs by the expansion and contraction of lungs.
Inspiration: It is the process by which fresh air enters the lungs.

Expiration: It is a process by which foul air (CO2) is expelled out from the lungs.