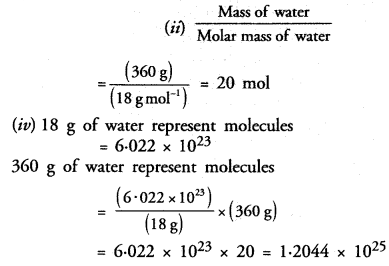 Question 5.
Which of the following would weigh the maximum ? 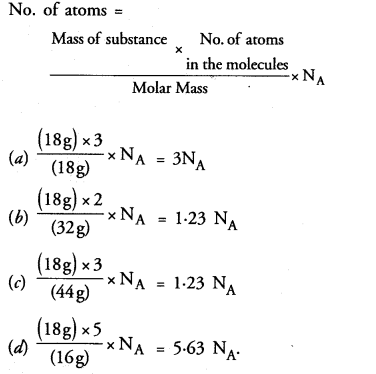 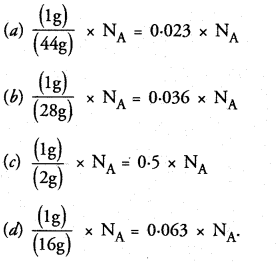 Question 8.
Mass of one atom of oxygen is : 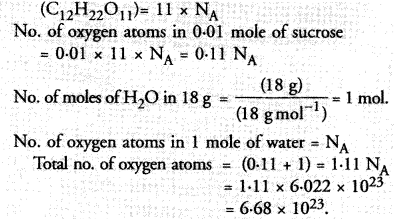 Question 15.
Give the formulae of the compounds formed from the following sets of elements :
(a) Calcium and fluorine
(b) Hydrogen and sulphur
(c) Nitrogen and hydrogen
(d) Carbon and chlorine
(e) Sodium and oxygen
(f) Carbon and oxygen.
Answer:
(a) CaF2
(b) H2S
(c) NH3
(d) CCl4
(e) Na2O
(f) CO and CO2.

Question 17.
Give the chemical formulae for the following compounds and compute the ratio by mass of the combining elements in each one of them.
(a) Ammonia
(b) Carbon monoxide
(c) Hydogen chloride
(d) Aluminium fluoride
(e) Magnesium sulphide.
Answer:

Question 19.
What is the fraction of mass of water (H2O) due to neutrons ?
Answer:

Question 21.
Classify each of the following on the basis of their atomicity.

Question 22.
You are provided with a fine white coloured powder which is either sugar or salt. How would you identify it without tasting ?
Answer:
Dissolve both sugar and salt separately in water taken in two glass beakers. Pass electric current through both. In case, solution is conducting, it represents a salt dissolved in water. If it fails to conduct electricity, it represents a sugar solution. 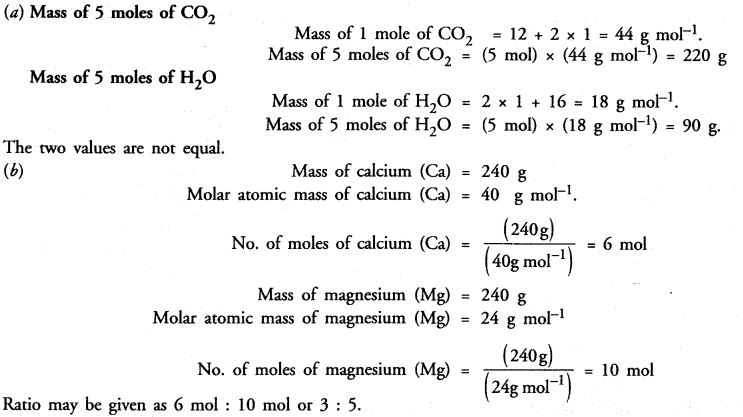 Question 25.
Find the ratio by mass of the combining elements in the following compounds :

Question 26.
Calcium chloride when dissolved in water dissociates into its ions according to the following equation.

Calculate the number of ions obtained from CaCl2 when 222 g of it is dissolved in water.
Answer:

Question 27.
The difference in the mass of 100 moles each of sodium atoms and sodium ions is 5.48002 g. Compute the mass of an electron.
Answer:

Question 28.
Cinnabar (HgS) is a prominent ore of mercury. How many grams of mercury are present in 225 g of pure HgS ?
Answer:

Question 30.
A sample of vitamin C is known to contain 2.58 x 1024 oxygen atoms. How many moles of oxygen atoms are present in the sample ?
Answer:

Question 32.
Fill in the missing data in the given table

Question 34.
What is the SI prefix for each of the following multiples and submultiples of a unit ?

Question 36.
Compute the difference in masses of 103 moles each of magnesium atoms and magnesium ions.
Answer:

Question 38.
Compare the number of ions present in 5.85 g of sodium chloride.
Answer:

Question 39:
A gold sample contains 90% of gold and the rest copper. How many atoms of gold are present in one gram of this sample of gold ?
Answer:

Question 40.
What are ionic and molecular compounds ? Give examples.
Answer:
Simple ionic compounds are of binary nature. It means that both the positive and negative ions have one atom only. The symbols of these ions are written side by side with their valencies at their bottom. A common factor if any, is removed to get a simple ratio of the valencies of the combining atoms. The criss-cross method is then applied to arrive at the final chemical formula of the compound. Let us write the formulae of a few simple ionic compounds. For example,

The molecular compounds also called covalent compounds. The compounds listed above are heteroatomic in nature. It means that different elements partici­pate in these compounds. They may be homoatomic also which means that these are formed from the atoms of the same element. For example, hydrogen molecule (H2), chlorine molecule (Cl2), oxygen molecule (02), nitrogen mol­ecule (N2), etc.

Question 41.
Compute the difference in masses of one mole each of aluminium atoms and one mole of its ions. (Mass of an electron is 9.1 x 10-28 g). Which one is heavier ?
Answer:

Question 42.
A silver ornament of mass ‘m’ gram is polished with gold equivalent to 1% of the mass of silver. Compute the ratio of the number of atoms of gold and silver in the ornament.
Answer:

Question 45.
Complete the following crossword puzzle by using the name of the chemical elements. Use the data given in table. 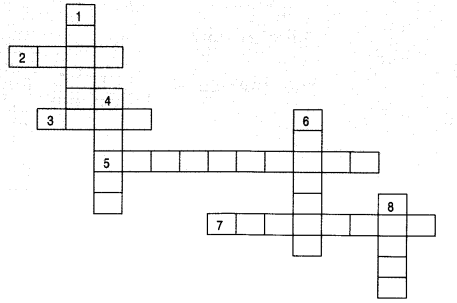 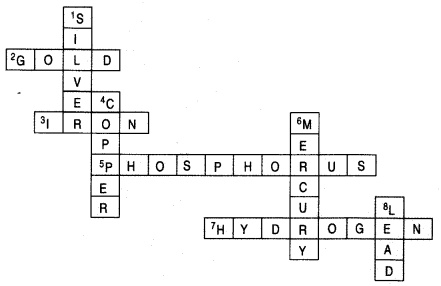 Question 47.
In photosynthesis, 6 molecules of carbon dioxide combine with an equal number of water molecules through a complex sereies of reactions to give a molecule of glucose having a molecular formula C6H12O6 and a molecule of oxygen with molecular formula O2. How many grams of water would be required to produce 18 g of glucose ? Compute the volume of water so consumed assuming the density of water to be 1 g cm-3.
Answer:

Hope given NCERT Exemplar Solutions for Class 9 Science Chapter 3 Atoms and Molecules are helpful to complete your science homework.