Question 2.
The plant body in higher plants is well differentiated and well developed. Roots are the organs used for the purpose of absorption. What is the equivalent of roots in the less developed lower plants?
Solution:
Root like structure called rhizoids are present instead of roots in less developed lower plants (bryophytes and pteridophytes). The plant tissue system in these is not differentiated into true leaf, stem and roots as it is found in higher plants (gymnosperm and angiosperm).

Question 1.
Why are bryophytes called the amphibians of the plant kingdom? Amphibians can their in water as well as on terrestrial habitat.
Solution:
Bryophytes are a group of primitive plants having a dominant gametophytic plant body. These plants can live in soil but depend on water for movement of male gametes called antherozoids to reach the archegonium (female organ bearing egg cell) so that fertilisation can occur, so bryophytes are called the amphibians of the plant kingdom.

Question 2.
Heterospory, i.e., formation of two types of spores— microspores and megaspores is a characteristic feature in the life cycle of a few members of pteridophytes and all spermatophytes. Do you think heterospory has some evolutionary significance in plant kingdom?
Solution:

Question 3.
Each plant group of plants has some phylogenetic significance in relation to evolution Cycas, one of the few living members of gymnosperms is called as the ‘relic of past’. Can you establish a phylogenetic relationship of Cycas with any other group of plants that justifies the above statement?
Solution:
Cycas is an evergreen plant which resembles palm. It has an unbranched stem and large compound leaves. It exhibits phylogenetic relationship with pteridophyte. Its evolutionary characters include thefollowing:
(i) Growth is redundant.
(ii) Shedding of seed while the embryo is still immature.
(iii) Minimal secondary growth and manoxylic wood.
(iv) Megasporophylls are leaf like.
(v) Sperms are flagellate even when pollen tube is present.
(vi) Leaf bases are persistent.
(vii) Ptysix is circinate.
(viii) Arrangement of microsporangia in well defined archegonia. 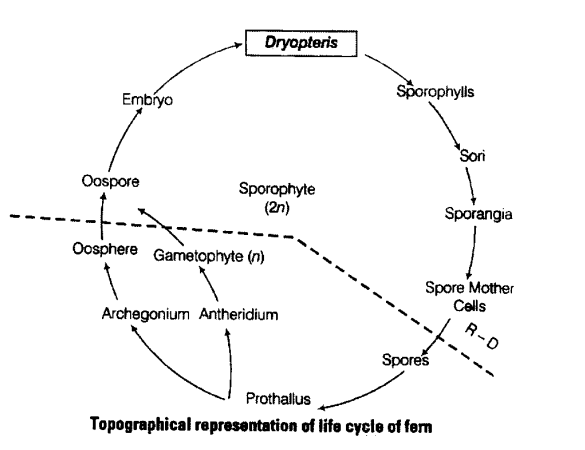 The prothallus of the fem is a multicellular, free living, thalloid, haploid and autotrophic structure. It develops from the spores produced by sporophyte after reduction division.
These spore germinate within a germtube with an apical cell and forms a filament of 3-6 cells and one or two rhizoids at the base which later develops into gametophytic plant.

Question 6.
How are the male and female gametophytes of pteridophytes and gymnosperms different from each other?
Solution:

Question 1.
Explain why sexual reproduction in angiosperms is said to take place through double fertilisation and triple fusion. Also draw a labelled diagram of embryo sac to explain the phenomena.
Solution:

Question 2.
Draw labelled diagrams of
(a) Female and male thallus of a liverwort.
(b) Gametophyte and sporophyte of Funaria.
(c) Alternation of generation in angiosperm.
Solution: 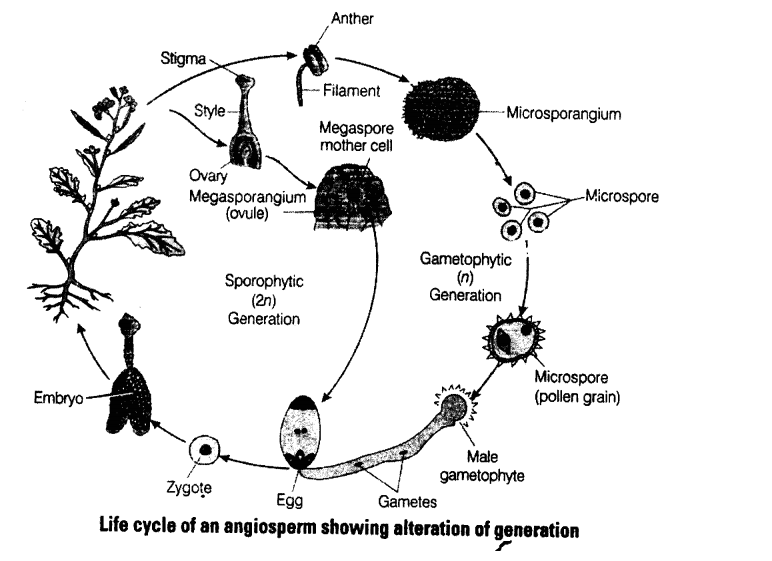