Question 1.
Name a plant, which accumulate silicon.
Solution:
Oryza sativa and Triticum aestivum are the plants that accumulates silicon. These plants absorbs silicon actively and accumulate them in their biomass.

Question 5.
What type of conditions are created by leghaemoglobin in the root nodule of a legume?
Solution:
Leghaemoglobin present in the root nodules of leguminous plants is responsible for creating anaerobic conditions and hence acts as an oxygen scavenger, protecting enzyme nitrogenase to come in contact with oxygen and help in the proper functioning of enzyme, i. e., conversion of atmospheric nitrogen to ammonia (NHj).

Question 6.
Yellowish edges appear in leaves deficient in.
Solution:
Yellowish edges or chlorosis appears in the leaves due to the deficiency of nitrogen. Its deficiency also causes delaying of flowering, interference in protein synthesis and dormancy of lateral buds. 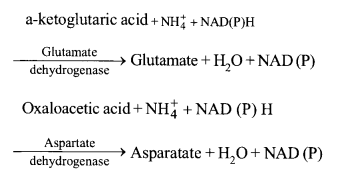 Question 10
Excess of Mn in soil leads to deficiency of Ca, Mg and Fe. Justify.
Solution:
When higher amounts of Mn2+ is absorbed by plants. The toxicity expressed in the form of brown sports surrounded by chlorotic vein.
It is due to the following reasons
(i) Reduction in uptake of Fe3+ and Mn2+.
(ii) Inhibition of binding of Mn2+ to specific enzymes.
(iii) Inhibition of Ca2+ translocation in shoot apex.
Thus, excess of Mn2+ causes deficiency of iron, magnesium and calcium.

Question 1.
How is sulphur important for plants? Name the amino acids in which it is present.
Solution:
Sulphur is a macronutrient that is important for normal plant growth and development. It is also an integral part of some amino acids, proteins and helps in deciding the secondary structure of proteins as it forms disulphide bonds.

It is absorbed by the plants as SO42- ion. It is present in vitamins (biotin, thiamine), proteins, coenzyme-A, amino acid (cystein and methionine) etc. It is also an essential component of plants like (onion, garlic) and mustard.

Its deficiency causes chlorosis in young leaves, extensive root growth, formation of hard and woody stem. It also causes the reduction in juice content of citrus fruit and tea yellow disease of tea.

Question 2.
How are organisms like Pseudomonas and Thiobacillus of great significance in nitrogen cycle?
Solution:
In biological nitrogen fixation, the atmospheric N2 gets reduced to NH3 by the help of enzyme nitrogenase reductase present in some prokaryotes. NH3 is then oxidised in to N02 and NO3 by some other bacteria (Nitrosomonas and Nitrobacter) following are the various steps involved in nitrogen fixation. 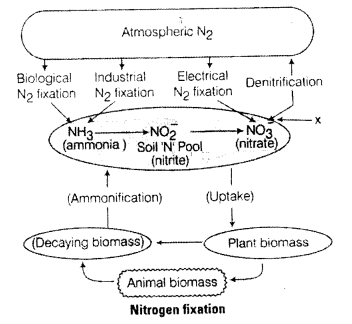 Pseudomonas and Thiobacillus are involved in the process of denitrification. They convert nitrate (NO3–) and nitrite (NO2–) into free nitrogen (N2), that is released into the atmosphere. 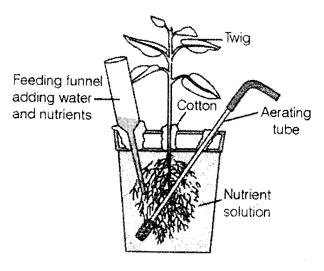 (a) Name the technique shown in the figure and the scientist who demonstrated this technique for the first time.
(b) Name atleast three plants for which this technique can be employed for their commercial production.
(c) What is the significance of aerating tube and feeding funnel in this setup?
Solution:
(a) Hydroponics,’Julius Von Sachs (1860)
(b) (i) Solanum lycopersicum (tomato)
(ii) Hibiscus asculentus (ladiesfinger)
(iii) Solanum melongena (brinjal)
(c) Aerating tube provides oxygen for the normal growth and development of the roots growing in the liquid solution. Feeding funnel is used to add water and nutrients in the hydroponic system when required.

Question 4.
Name of most crucial enzyme found in root nodules for N2-fixation? Does it require a special pink coloured pigment for its functioning? Elaborate.
Solution:
The most crucial enzyme found in the root nodules for N2-fixation is nitrogenase. It is a Mo – Fe protein that catalyses the conversion of atmospheric nitrogen to ammonia. Pink colour 8.
pigment present is root nodules of leguminous plants is called leghaemoglobin creates * anaerobic conditions for the functioning of nitrogenase enzyme.

In pitcher plant leaves are modified into pitcher which stores the juice to lure an insect. When the insect come to suck this juice, chemicals present in nectar dissolve the skin of the prey and the plant obtains nutrients (mainly nitrogen) from its skin.

Question 6.
A farmer adds/supplied Na, Ca, Mg and Fe regularly to his field and yet he observes that the plants show deficiency of Ca, Mg and Fe. Give a valid reason and suggest a way to help the farmer improve the growth of plants.
Solution:
Plant can tolerate a specific amount of micronutrients. A lesser amount of micro- nutrient can cause deficiency symptoms and higher amount can cause toxicity.

It has also been observed that the toxicity of one micronutrient causes the deficiency of other nutrients.
To overcome such problems, farmers should use these nutrients in prescribed concentration so that the excess uptake of one element do not reduce the uptake of the element.

Question 7.
We find that Rhizobium forms nodules on the roots of leguminous plants. Also Frankia another microbe forms nitrogen fixing nodules on the roots of non-leguminous plant Alnus.
(a) Can we artificially induce the property of nitrogen-fixation in a plant, leguminous or non leguminous?
(b) What kind of relationship is observed between mycorrhiza and pine trees?
(c) Is it necessary for a microbe to be in close association with a plant to provide mineral nutrition? Explain with the help of one example.
Solution:
(a) Artificial induction in leguminous and non- leguminous plants have been tried by scientists. It’s success rate is very low because expression of gene is highly specific phenomenon. When it desired gene is introduced that may not work because conditions for its expressions are very specific.
(b) Symbiotic mutualistic relationship (mutualism) is observed between the pine roots and mycorrhiza as both are benefitted mutually.
(c) Yes it is necessary for a microbe to be in close association with plant to provide mineral nutrition, to develop a physical relationship for example Rhizobium gets into the root and involve root tissues, then only helps in nitrogen-fixation.

Question 8.
With the help of examples describe the classification of essential elements based on the function they perform.
Solution:
Based on the diverse functions of essential elements, these are categorised into following categories given below:
(i) Constituent of biomolecules: These are the essential component of biomolecules. Hence, known as structural elements of cells, e.g., carbon, hydrogen, oxygen and nitrogen.
(ii) Energy related Chemical compound: Some elements also function in providing energy to the cell e.g. phosphorus is a component of ATP which function as energy currency -of all the living system in which magne¬sium is a component of chlorophyll, which is involved in the conversion of light en¬ergy to chemical energy.
(iii) Enzyme showing catalytic effects: Many of the essential elements are required in the form of cofactors by enzymes. They function as the activator or inhibitor of enzymes, e.g., Mg2+ acts as an activator of several enzymes in both photosynthesis e.g., Ribulose bisphosphate(RuBP), Car boxylase , Phosphoenol pymvate carboxy¬lase and respiration (e.g., hexokinase and phosphofructokinase). While Zn2+ acts as an activator of alcohol dehydrogenase while Mo of nitrogenase during the course of nitrogen fixation.

Question 9.
Trace the events starting from the coming in contact of Rhizobium to a leguminous root till nodule formation. Add a note on importance of leghaemoglobin.
Solution:
Formation of Root Nodule The coordinated activities of the Rhizobiam bacteria regume depends on the chemical interaction between these symbiotic partners.
In the following diagram the principle stages in the nodule formation are summarised. Leghaemoglobin is an oxygen scavenger, that protects nitrogen enzyme from 02 and also creates anaerobic conditions for the reduction of N2 to NH3 by Rhizobium bacteria.

Question 10.
Give the biochemical events occurring in the root nodule of a pulse plant. What is the end product? What is its fate?
Solution:
Formation of root nodule in pulse plant is the result of infection of roots by Rhizobium. The following figure shows the process of nodule formation.

(b) Successful infection of the root hair causes it to curl 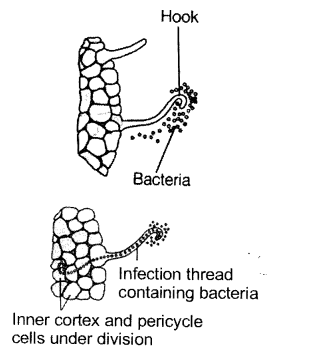 (c) Infected thread carries the bacteria to enter the cortex. Bacteria cause cortical and pericycle cells to divide, lead to nodule formation

(d) Mature nodule with vascular tissues continuous with those of the roots.
The chemical reaction is as follows
N2 + 8e–+ 8H++ 16 ATP ->2NH3 + H2 + 16ADP + P1i
The reaction takes place in the presence of enzyme nitrogenase that acts in anaerobic conditions, which is created by leghaemoglobin.
Fate of Ammonia
There are two ways by which ammonia is further used. 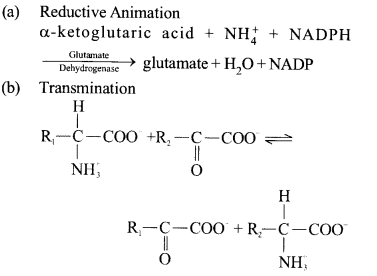 This reaction and transfer of NH2 group take place for amino acid to other amino acid catalysed by enzyme transaminase.

Question 11.
Hydroponics have been shown to be a successful technique for growing of plants. Yet most of the crops are still grown on land. Why?
Solution:
Hydroponics is a soil less culture and successful technique for plants, still many crops are grown on land because
(i) The major concern is its cost. The setting and handling of hydroponics requires much more investment than that of the soil based production.
(ii) Sanitization is extremely important, because especially with indoor hydroponic environments. Water borne disease can spread quickly through some methods of hydroponic production.
(iii) It is relatively a new technique and not used by the traditional farmers due to lack of knowledge.
(iv) Plants are less adaptable to the surrounding atmosphere. However weather and narrow oxygenation may minimise the production and quality of plant yield.