Question 2.
If the key in the arrangement shown in figure is taken out (the circuit is made open) and magnetic field lines are drawn over the horizontal plane ABCD, the lines are
(a) concentric circles
(b) elliptical in shape
(c) straight lines parallel to each other
(d) concentric circles near the point O but of elliptical shapes as we go away from it
Answer:
(c). 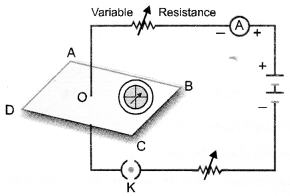 Explanation : When no current flows through the wire, mag¬netic field lines over the plane ABCD will represent magnetic field of the earth. These field lines are straight lines parallel to each other. 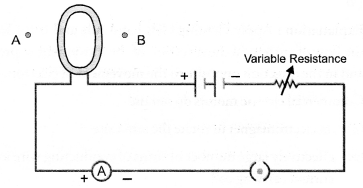 Answer:
(a).
Explanation : If current seems to flow in anticlockwise direction in a coil, then that face of the coil acts as N-pole.

Question 5.
A uniform magnetic field exists in the plane of paper pointing from left to right as shown in figure. In the field, an electron and a proton move as shown. The electron and proton experience 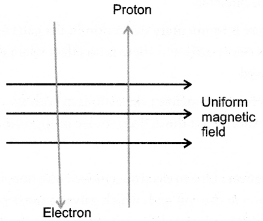 Question 6.
Commercial electric motors do not use
(a) an electromagnet to rotate the armature
(b) effectively large number of turns of conducting wire in the current carrying coil
(c) a permanet magnet to rotate the armature id a soft iron on which the coil is wound.
Answer:
(c).
Explanation : In commercial motor, armature rotates in the mag-netic field produced by an electromagnet. The strength of such magnetic field can be increased to the desired value. However, a permanent magnet provides a fixed and weak magnetic field.

Question 7.
Figure shows the arrangment of two coils wound on a non-conducting cylindrical rod. The plugh of the key is then in¬serted and later removed.

Question 9.
A constant current flows in a horizontal wire in the plane of the paper from east to west as shown in figure. The direction of magnetic field at a point will be north to south.

Question 12.
The most important safety device method used for protecting electrical appliances from short circuiting or overloading is
(a) earthing
(b) use of stabilizers
(c) use of electric meter
(d) use of fuse.
Answer:
(d).
Explanation : Fuse melts and the circuit breaks as soon as the current in the circuit exceeds safe limit.

Question 13.
A magnetic compass needle is placed in a plane of paper near point A as shown in figure.
In which plane should a straight current carrying conductor be placed so that it passes through A and there is no change in the deflection of the compass ? Under what condition is the deflection maximum and why?

In other words, a steel rod can be made a permanent electro-magnet if it is placed inside a solenoid carrying direct current as shown in figure.

Question 15.
AB is a current carrying conductor in the plane of the paper as shown in figure. What are the directions of magnetic fields produced by it at points P and Q ? Given, r1 > r2, where will the strength of the magnetic field be larger ?
(CBSE 2010, 2012) 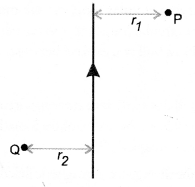 Question 16.
A magnetic compass shows a deflection when placed near a current carrying wire. How will the deflection of the compass get affected if the current in the wire is increased ? Support your answer with a reason. (CBSE 2012)
Answer:
A magnetic compass is a tiny magnet. It gets deflected when placed in a magnetic field. When the current in the wire increases, then the magnetic field produced by the wire also increases (∴ B ∝ I). Hence, deflection of the compass increases.

Question 17.
It is established that an electric current through a metallic conductor produces a magnetic field around it. Is there a similar magnetic field produced around a thin beam of moving

Question 22.
What is the role of two conducting stationary brushes in a simple electric motor ?
Answer:
These brushes act as the contacts between the commutator and the terminals of the battery.

Since frequency is 50 Hz, so a.c. completes 50 cycles in 1 second. Therefore, it reverses its direction 100 times in one second.

Question 24.
What is the role of fuse, used in series with any electrical appli-ances ? Why should a fuse with defined rating not be replaced by one with a larger rating ?
Answer:
Electric fuse is a safety device. It protects the electrical appliance due to short circuiting and overloading in the electric circuit.
Fuse with defined rating means the maximum current that can flow’ through the fuse wire without melting it. As and when current exceeds this maximum value, the fuse melts and the circuit is switched off. If fuse with defined rating is replaced by one with a larger rating, then large current will flow through the circuit without melting the fuse. This large current may burn the electrical appliance connected in the circuit and the fuse will not act as a safety device.