Nationalism In India MCQ Question 2.
In which of the following places Mahatma Gandhi organised satyagraha for the first time in India?
(a) Dandi
(b) Ahmedabad
(c) Kheda
(d) Champaran

MCQ On Nationalism In India Class 10 Question 3.
Who among the following was associated with the formation of Swaraj Party within the Congress?
(a) Subhas Chandra Bose
(b) Motilal Nehru
(c) Jawaharlal Nehru
(d) Dadabhai Naoroji

Class 10 History Chapter 3 MCQ With Answers Question 6.
Why had the Congress ignored the dalits for long?
(a) Due to their liberal outlook
(b) Due to fear from the Britishers
(c) For fear of offending the sanatanis
(d) For fear of Dr B.R. Ambedkar

Nationalism In India Class 10 MCQ Pdf Question 10.
Which of the following agreements gave reserved seats to the ‘Depressed classes’ in provincial and central legislative councils?
(a) Lucknow Pact
(b) Gandhi Irwin Pack
(c) Poona Pact
(d) None of these

Nationalism In India Class 10 MCQs Question 12.
What was the demand of 1929 sessions of the Congress at Lahore ?
(a) Poorna Swaraj
(b) Right to speech
(c) Half authority
(d) None of these

Nationalism In India MCQs Question 14.
Why was the slogans demanding “Swatantra Bharat” important?
(a) It showed the greatness of Mahatma Gandhi
(b) They were going beyond their own locality and emotionally identifying with an all-India movement
(c) They were a unifying force of the Non-Cooperation Movement
(d) The various ways in which ‘Swaraj’ was interpreted by different people

Question 16.
What were boycotted during Non-cooperation movement?
(a) Foreign goods
(b) Food
(c) Water
(d) None of these

Question 17.
Who published ‘The Folklore of Southern India’?
(a) Natesa Sastri
(b) Dr.Ambedkar
(c) Mahatma Gandhi
(d) None of these

Question 18.
What was the reason for Mahatma Gandhiji’s fast unto death in 1932?
(a) The clash with Dr. Ambedkar
(b) The Clash with Bose
(c) The clash with Nehru
(d) None of these

Question 21.
The Non-Cooperation Movement was started by Mahatma Gandhi in support of which movement?
(a) Khilafat
(b) Swaraj
(c) Khilafat and Swaraj
(d) none of these

Question 22.
Who was the author of the famous novel ‘Anandamath’?
(a) Bankim Chandra Chattopadhyay
(b) Abanindranath Tagore
(c) Natesa Sastri
(d) Rabindranath Tagore

Question 1.
Identify the following personality (NCERT TB page 70) and write a short paragraph on him highlighting his contribution to the Indian national movement. 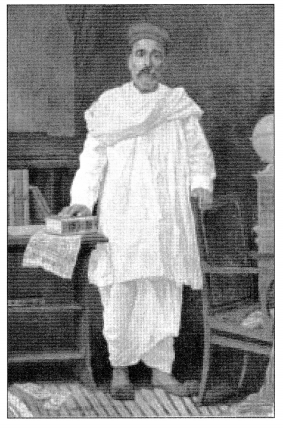 Question 2.
Look at the picture taken from NCERT Textbook Page 71 and answer the questions that follow. 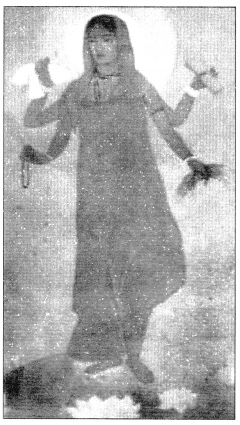 (i) What is this image of?
(ii) Who painted this image and when?
(iii) How does the painter portray Bharat Mata?

Question 3.
Look at the picture taken from NCERT Textbook Page 72 and answer the questions that follow. 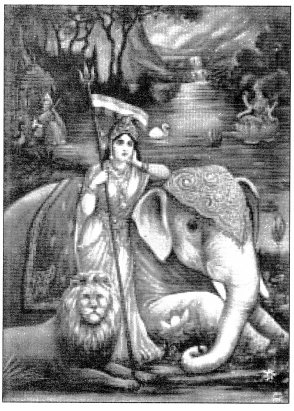 (i) What is depicted in the above picture?
(ii) What was its significance during the freedom struggle?

How do you think to help the depressed classes in India? Express your opinion.