Class 10 History Chapter 2 MCQ With Answers Question 2.
Who, among the following, was a member of the French team, who explored Mekong river?
(a) Paul Bernard
(b) Liang Qichao
(c) Nuynh Phu So
(d) Francis Garnier

The Nationalist Movement In Indo-China MCQ Questions Question 6.
On which factor was the economy of Vietnam based on?
(a) Tea and Rubber Plantation
(b) Rice and Rubber plantation
(c) Rice and wheat Farming
(d) Rice and Tea plantation

Ch 2 History Class 10 MCQ Question 8.
A branch of the Restorations society was established in Tokyo by whom?
(a) By teachers
(b) By Industrialist
(c) By students
(d) None of the above

History Chapter 2 MCQ Class 10 Question 9.
Which movement started in against the spread of Christianity by the French.
(a) The Hoa Hao moment
(b) The Liberation movement
(c) The scholars Revolt
(d) Go east movement

Class 10 History Chapter 2 MCQ With Answers Pdf Question 10.
Which of the following Vietnamese women organized a large army to resist the Chinese?
(a) Trieu Au
(b) Nguyen Thi xuan
(c) Trung sisters
(d) None of the above

Question 17.
What were the provinces of Nghe An and Ha Tinh called in Vietnam?
(a) Electric current
(b) Electric circuit
(c) Electric fuses
(d) None of the above

Question 18.
How was women shown in magazines and journals in the 1960s?
(a) As housewives
(b) As brave dedicated workers
(c) As illiterates
(d) none of these

Question 19.
What is napalm?
(a) A chemical bomb
(b) An organic compound
(c) A phosphorous bomb
(d) An atomic bomb

Question 20.
Under whom was the Democratic Republic of Vietnam formed?
(a) Ho Chi Minh
(b) The Nguyen king
(c) Bao Dai
(d) Ngo Dinh Diem

Question 21.
The modern part of Hanoi was struck by which disease?
(a) Cholera
(b) Malaria
(c) Bubonic Plague
(d) Typhoid

Question 23.
Which one of the following parties was established by Ho Chi Minh in 1930?
(a) Vietnamese Communist Party
(b) The League for the Independence of Vietnam
(c) National Liberation Front
(d) None of these

Look at the following figure (NCERT TB Page 20) and answer the questions that follows.
(i) Identify the picture given below. Who founded it?
(ii) Write one sentence about it. 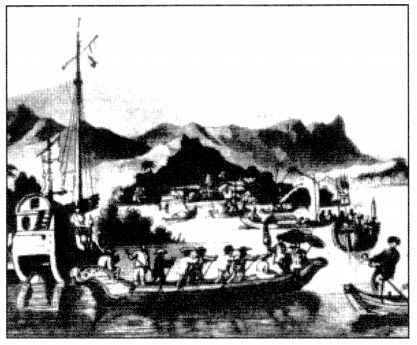 Read the following passage (Source B NCERT TB Page 43) and answer the questions that follow:

The declaration of the new republic began by reaffirming the principles of the declaration of independence of the United States in 1771 and of the French Revolution in 1791 but added that the French imperialists do not follow these principles for they ‘have violated our fatherland and oppressed our fellow citizens. They have acted contrary to the ideals of humanity and justice.

‘In the field of politics, they have deprived us of all liberties. They have imposed upon us inhuman laws … They have built more prisons than schools. They have mercilessly slain our patriots; they have drowned our uprisings in rivers of blood. ‘They have fettered public opinion; they have practiced obscurantism against our people … ‘For these reasons, we members of the Provisional Government, representing the entire population of Vietnam, declare that we shall henceforth have no connection with imperialist France; that we abolish all the privileges which the French have arrogated to themselves on our territory …

Questions:
(i) How did the French exploit the Vietnamese?
(ii) Which values are associated with the declaration of independence of the USA in 1776 and of the French Revolution in 1791?