Question 2.
Which are the different types of transport ?
Answer:
The transport can be classified into land, water and, air transport.

Question 4.
What are the factors for growing importance of the roadways ? State two factors.
Answer:

Question 5.
How are roads classified in India ?
Answer:
In India roads are classified into six classes as mentioned below :

Question 6.
What is road density ?
Answer:
The length of road per 100 sq. km of area is known as density of roads.

Question 8.
Mention one drawback of roads in India.
Answer:
Most of the bridges and culverts are old and narrow.

Question 10.
The northern plains provide favourable conditions for the growth of the railways. Mention any two.
Answer:

Question 11.
Why railway track are laid with difficulty in Rajasthan ?
Answer:
It is difficult to lay railway lines on the sandy plain of Rajasthan.

Question 12.
In recent times which railway has been developed along the west coast ?
Answer:
Konkan Railway.

Question 13.
The railways is facing many problems. Mention any two problems.
Answer:

Question 14.
What is the use of pipelines transport ?
Answer:
Pipelines are used for transporting crude oil, petroleum products and natural gas from oil and natural gas fields to refineries, fertilizer factories and big thermal power plants.

Question 15.
There are three important networks of pipeline transportation in the country. Mention any one.
Answer:
Gas pipeline from Hazira in Gujarat connects Jagdishpur in Uttar Pradesh via Vijaipur in Madhya Pradesh. It has branches to Kota in Rajasthan, Shahjahanpur, Babrala and other places in Uttar Pradesh.

Question 16.
Why are the waterways useful ? State any two advantages.
Answer:

Question 17.
Which waterways have been declared as National Waterways by the government ?
Answer:

Question 20.
Which is the biggest port ? State its one feature.
Answer:

Question 23.
What type of port is Kolkata ?
Answer:
Kolkata is an inland riverine port.

Question 24.
State one feature of Airways.
Answer:
Airways is the fastest, most comfortable and prestigious mode of transport.

Question 25.
Which is the extreme south-western port located at the entrance of a lagoon with a natural harbour ?
Answer:
Kochchi.

Question 26.
When was air transport nationalised ?
Answer:
In 1953.

Question 29.
How many telephone exchanges are there in India ?
Answer:
About 37565.

Question 31.
What is trade ?
Answer:
The exchange of goods among people, states and countries is referred to as trade.

Question 32.
Which states are important destinations of foreign tourists in India ?
Answer:
Rajasthan, Goa, Jammu and Kashmir and Temple towns of south India.

Question 3.
“Roadways still have an edge over railways in India.” Support the statement with arguments.
[CBSE 2016]
Answer:
See Textbook Question 2(1) and (2).

Question 7.
“Railways are the principal mode of transportation in India.” Explain.
Answer:
The railways are the main artery of inland transport in India. It is the lifeline of the country as mentioned below :

(2) Peninsular region and the Himalayan region :

(3) Desert of Rajasthan : On the sandy plain of western Rajasthan too, it is very difficult to lay railway lines which has hindered the development of railways.
(4) Swamps of Gujarat, forested tracts of Madhya Pradesh, Chhattisgarh, Orissa and Jharkhand : These are also not suitable for the development of the railways.
(5) The contiguous stretch of Sahyadri could be crossed only through gaps or passes (ghats). Although the Konkan railway along the west coast has been developed but it has also faced a number of problems such as sinking of track in some stretches and landslides.

Question 12.
Describe the inland navigation waterways in India. What are its advan¬tages ?
Answer:
(1)

(2) The advantages of waterways are as given below :

Question 14.
Describe the air transport in India. What are the advantages of airways ?
Answer:
(1)

(2) The advantages of airways are as given below :

Question 17.
Write a short note on the telecom networks in India.
Answer:

Question 19.
What is the position of India in the production of films ? What type of Rims are produced and which authority certifies them ?
Answer: 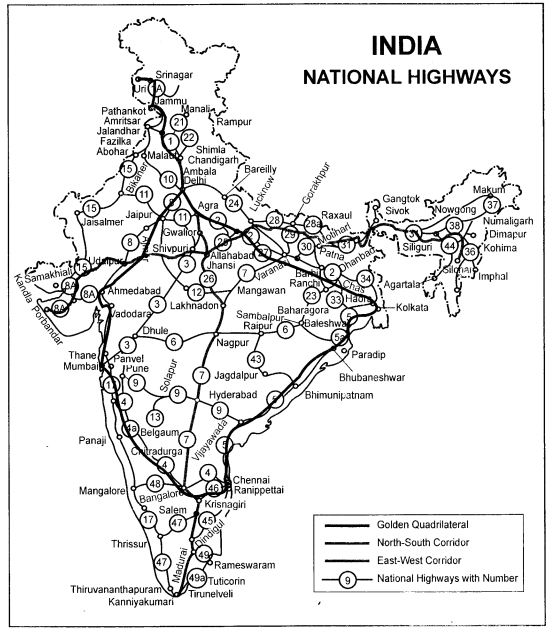 Question 2.
On the outline map of India show the following :

Answer:
Major sea ports and airports are as given below : 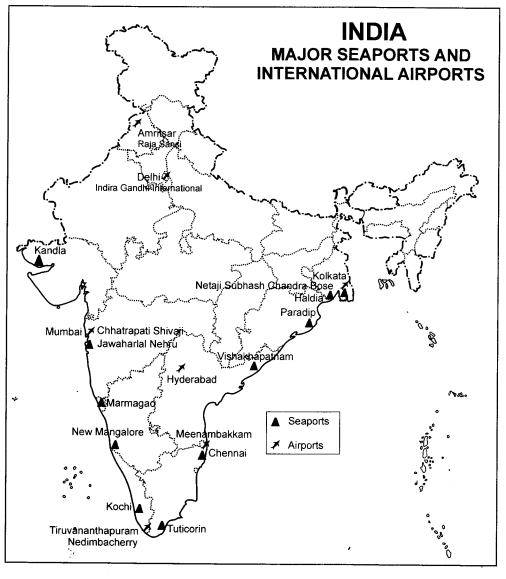 Question 3.
On the map of India locate headquarters of the railway zones in India.
Answer: 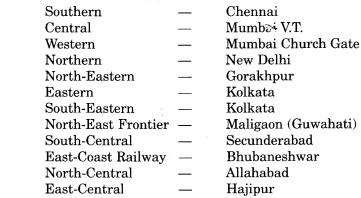 The headquarters of the sixteen zones are as given below : 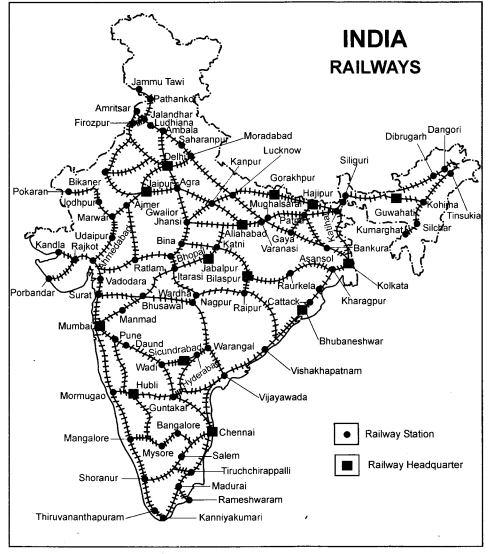 Question 4.
Six features with serial numbers (1) to (6) are marked in the given political outline map of India. Identify these features with the help of the following informa­tion and write their correct names on the lines marked in the map.
(1) Southern point of North-South corridor.
(2) A point in Golden Quadrilateral.
(3) An International Airport.
(4) A major sea port.
(5) Headquarter of Eastern Railways.
Answer: 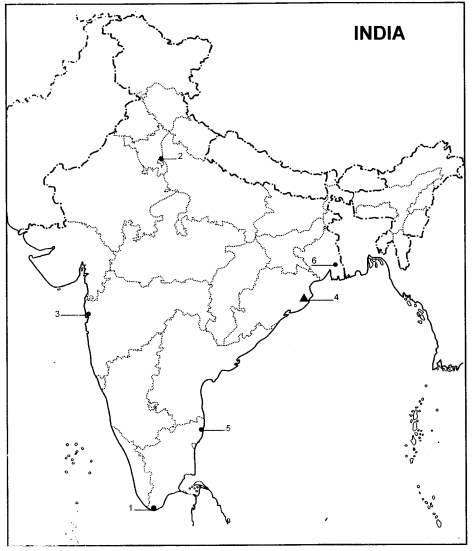