Question 1.
State some products/things we use that are made of metals.
Answer:
Railway lines, a tiny pin, machinery, cars etc. are all made of metals.

Question 4.
What is a mineral ?
Answer:
Mineral is a “homogenous” naturally occurring substance with a definable internal structure.

Question 6.
What is the interest of a geologists in minerals ?
Answer:
A geologist is interested in the formation of minerals, their age and physical and chemical composition.

Question 9.
What type of mineral is copper ?
Answer:
Copper is a metallic mineral.

Question 10.
Where are minerals found ?
Answer:
Minerals are found in ores.

Question 11.
What is an ‘ore’ ?
Answer:
The term ‘ore’ is used to describe an accumulation of any material mixed with other elements.

Question 13.
Which minerals are formed as a result of evaporation ? Name any two.
Answer:
Potash salt and sodium salt.

Question 14.
Placer deposits contain minerals which are not corroded by water. Which are these minerals ?
Answer:
Gold, silver, tin and platinum.

Question 15.
What do you understand by Rat-hole mining ?
Answer:
In the tribal areas of the north-east India, minerals are owned by individuals or communities. Thus, coal mining in Jowai and Cherapunjee is done by family member in the form of a long narrow tunnel, known as ‘Rat-hole’ mining.

Question 20.
Which is the finest iron ore and why ?
Answer:
Magnetite is the finest ore with a very high content of iron up to 70 per cent. It has excellent magnetic qualities.

Question 25.
How are bauxite deposits formed ?
Answer:
Bauxite deposits are formed by the decomposition of a wide variety of rocks rich in aluminium silicates.

Question 26.
Which state is the largest bauxite producing in India ?
Answer:
Orrisa.

Question 30.
Which are different types of coal ?
Answer:
Lignite, bituminous and anthracite.

Question 1.
Describe the importance of minerals in human life.
Answer:

Question 2.
“Minerals are found in varied forms in nature ranging from the hardest diamond to the softest talc.” Why are they so varied ?
Answer:
The reasons are as mentioned below :

(3) Some minerals like bauxite are formed due to decomposition of surface rocks and the removal of soluble constituents, leaving a residual mass of weathered material containing ores, e.g., bauxite is formed this way.
(4) Certain minerals like gold, silver, tin and platinum occur as alluvial deposits in sands of valley floors and the base of hills. These are called ‘placer deposits’ and contain minerals, which are not corroded by water.
(5) Ocean waters : Some minerals like common salt, magnesium and bromine are largely derived from ocean waters. The ocean beds too are rich in manganese nodules.
Thus, minerals are found in various types of formations.

(2) To meet the demand, a choice is made between a number of possible options.

(2) Causes of these variations are differences in the geological structure, processes and time involved in the formation of minerals.

(2) Iron ore is very important for the industrial development of the country. It is a metal of universal use. It is used for manufacturing of machines, agricultural implements and items of general use.

Question 9.
Describe the uses of manganese. Where is it found in India ?
Answer:
(1) Uses :

(2) Orissa is the largest producer of manganese ores. It produced one-third of the country’s total production in 2000-01. Karnataka produces 15%, Madhya Pradesh 22% and other states produce 30% manganese in the country. See the figure given below : 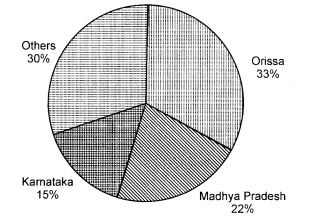 Question 10.
Describe the distribution of copper in India. What are its uses and what is the position of India regarding its availability ?
Answer:

Question 11.
Write a short note on bauxite, its formation, features and distribution in India.
Answer:
(1) Type of mineral : Bauxite is a clay-like substance from which alumina and later aluminium is obtained. Aluminium is an important metal because it combines the strength of metals such as iron, with extreme lightness and also with good conductivity and great malle-ability.
(2) Formation : Bauxite deposits are formed by the decomposition of a wide variety of rocks rich in aluminium silicates.
(3) Distribution :

Question 12.
Name the non-metallic mineral which can split easily into thin sheets ? Mention its uses.
Or
Describe the formation, distribution and uses of mica in India.
Answer:

Question 13.
Describe how limestone is found. What are its uses ? Describe its distribu¬tion in India.
Answer:

(2) The condition in coal mines in India are sometimes not satisfactory. Underground fires start mostly from burning trash close to coal pits. Over 50% of coal-belt mines are not safe in India. The companies which own mines do not meet the basic safety standards. The safety status of mines has been graded second and third degrees in the past. Lack of security measures in the coal mines leads to disasters. It has, in practice, become a ‘killer industry’ because many miners are killed every year due to explosions or other incidents in the mines.

Question 16.
State another name of lignite coal and write any one feature and use of the same.
Or
Describe qualities of different types of coal found in India. Describe its formation, distribution and uses.
Answer:
(1) There are four types of coal. Their qualities are given below :

(2) Formation : It is formed due to the compression of plant material over millions of years.
(3) Distribution : Coal is found in Damodar valley i.e., West Bengal, Jharkhand, Jharia, Raniganj, Godavari, Mahanadi, Son and Wardha valleys, Meghalaya, Assam, Arunachal Pradesh and Nagaland.
(4) Uses of coal :

Question 17.
Highlight the importance of petroleum. Explain the occurrence of petrolei ? in India. [CBSE 2016]
Answer:
(1) Importance : It is the second major energy source in India after coal. Its uses are as given below:

(2) Occurrences of petroleum is as mentioned below :

Question 18.
Write a short note on natural gas as a conventional source of energy with special reference to its uses, features and distribution.
Answer:

Question 19.
What are the two main ways of generating electricity ? How are they different from each other ?
Or
Differentiate between hydro electricity and thermal electricity.
Or
Why per capita consumption of electricity is considered as an index of development ?
Answer:
(1) Electricity is generated in two ways :

(2) For progress and prosperity of individuals and the nation, electricity is an important requirement. It is used at homes as well as in offices and in industries. It has a very wide range of applications in today’s world. That is why its per capital consumption is considered as an index of development.

Question 20.
How nuclear or atomic energy is obtained ? Mention the nuclear power stations and the states where they are located.
Answer:
(1) Nuclear or atomic energy is obtained by altering the structure of atoms. When such an alteration is made, much energy is released in the form of heat and this is used to generate electric power. It is produced by using uranium and thorium. These are available in Jharkhand and the Aravalli ranges of Rajasthan. Monazite sands of Kerala contain uranium. India has vast deposits of thorium which is about 50 per cent of world’s deposits.
(2) Six nuclear power stations are located in the states as mentioned below :

Question 22.
Describe the importance of wind energy in India with special reference to its uses.
Answer:
India has a wind power potential of 20,000 MW. This energy requires only initial cost on the establishment of wind farm. The largest wind farm cluster is located in Tamil Nadu from Nagarcoil to Madurai. Wind farms have been established in Andhra Pradesh, Karnataka, Gujarat, Kerala, Maharashtra and Lakshadweep. India now ranks as a “wind super power” in the world.

Question 23.
How is biogas produced ? What are its uses ?
Answer:
(1) Production : Shrubs, farm waste, animal and human waste are used to produce biogas for domestic consumption in rural areas. Decomposition of organic matter yields gas, which has higher thermal efficiency in comparison to kerosene, dung cake and charcoal.
(2) Uses of biogas :

Question 1.
Show important places where the following minerals are found : 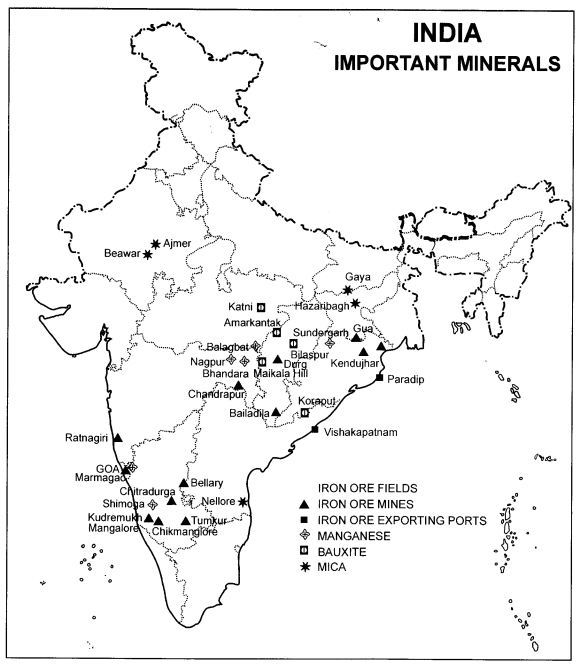 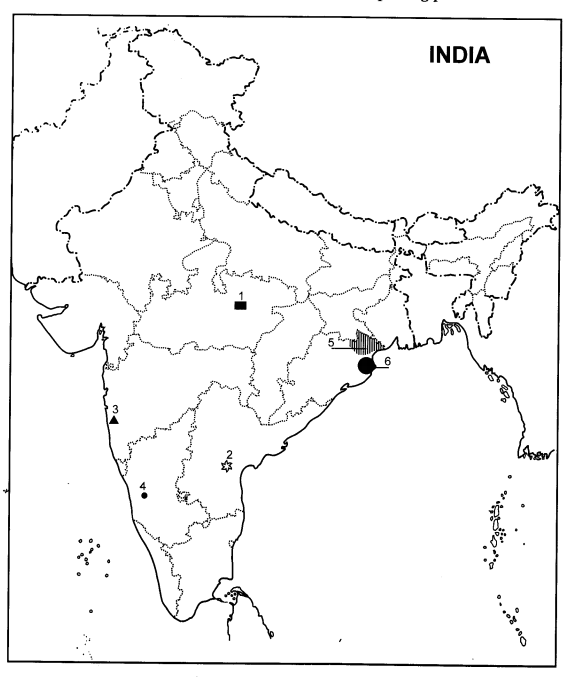 Answer:
The correct names  are as given below :

See map given below : 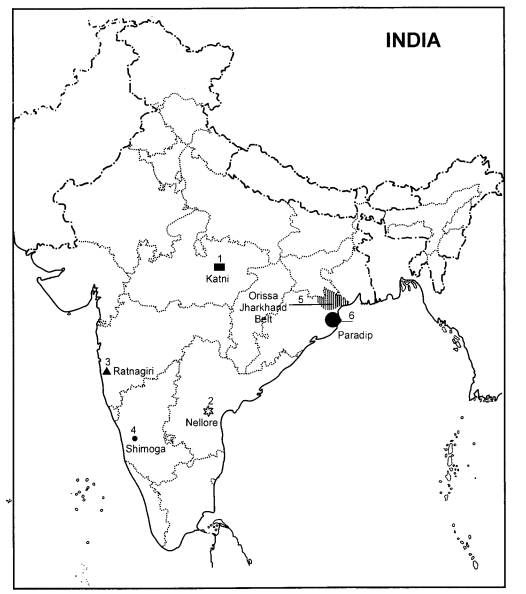 See the map given below : 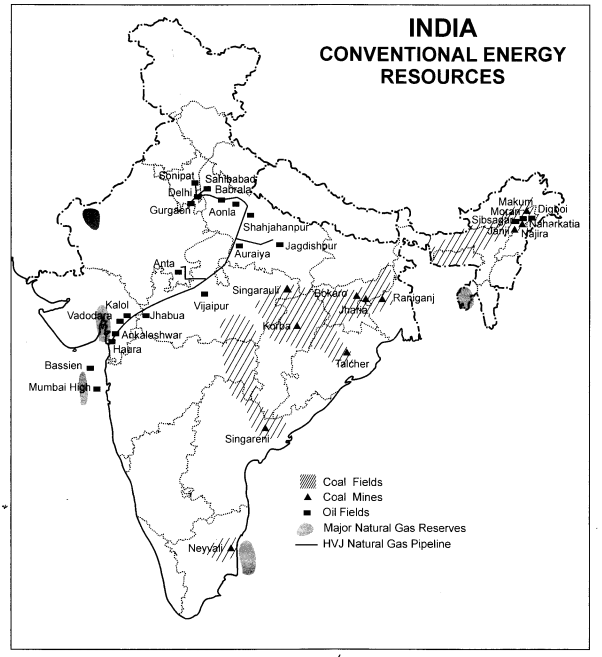 Question 4.
On the map of India show the nuclear and thermal power plants.
Answer:

see the map given below : 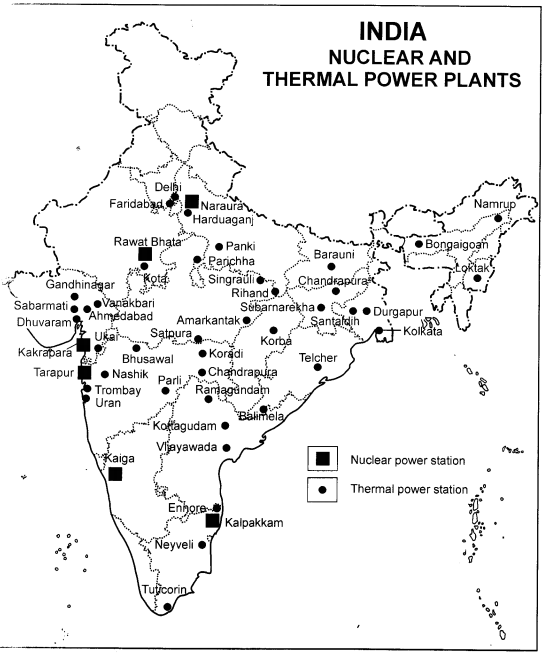