You can also practice NCERT Solutions for Class 8 History Chapter 11 Questions and Answers on LearnInsta.com.

Question 3.
Define the term Sovereign.
Answer:
The capacity to act independently without outside interference.

Question 4.
What was the role played by AO. Hume?
Answer:
A retired British official A.O. Hume played an important role by bringing Indians from the various regions together.

Question 5.
Which movement demanded for Indianisation of the movement?
Answer:
It was part of movement against racism.

Question 7.
Mention the slogan raised by Tilak.
Answer:
Tilak raised the slogan “Freedom is my birthright and I shall have it!”

Question 8.
How was the first year spent by Mahatma Gandhi in India?
Answer:
His first year in India was spent travelling throughout the country, understanding the people, their needs and situations.

Question 9.
What was mainly discussed in the Naoroji’s book Poverty and un-British Rule in Indial
Answer:
In this book, he offered a scathing criticism of the economic impact of British rule.

Question 10.
In which year congress split took place?
Answer:
In 1907.

Question 11.
When did Gandhiji arrived from where?
Answer:
He arrived in 1915 from South Africa.

Question 15.
Which dates is observed as a day of non-violent opposition to the Rowlatt Act?
Answer:
6 April 1919.

Question 16.
How many delegates from all over India met at Bombay in 1885?
Answer:
72 delegates.

Question 17.
What is meant by the concept of Poorna Swaraj?
Answer:
It means complete independence.

Question 18.
What does RSS stands for?
Answer:
It stands for Rashtriya Swayam Sevak Sangh.

Question 19.
What was the demand of ‘Assam tea garden labours?
Answer:
The demand was for the increase in the wages.

Question 1.
Describe the event of Gandhiji’s arrival to India from South Africa.
Answer:
Gandhiji, at the age of 46, arrived in India in 1915 from South Africa. He led Indians in South Africa in non-violent marches against racist restrictions. He was already a respected leader known internationally. His South African campaign brought him in contact with various types of Indians.

Question 2.
How did the First World War alter the economic and political situation in India?
Answer:
The First world War led to a huge rise in the defence expenditure of the Government of India. The Government in turn increased taxes on individual incomes and business profits. Increased military expenditure and the demands for war supplies led to a sharp rise in prices that created difficulties for the common people. On other side business groups reaped fabulous profits from the war.

The war created demand for industrial goods and there was seen a decline of imports from other countries into India so Indian industries expanded during the war. These industries began demanding greater opportunities for development. All this shows the way economic and political situation altered in India with the event of the First World War.

Question 3.
Mention the events by which people linked Non-Cooperation movement to local grievances. Answer:
In Kheda, Gujarat, patidar peasants organized non-violent campaigns against the high land revenue demand of the British. In coastal Andhra and interior Tamil Nadu, liquor shops were picketed. In Guntur, tribals and some peasants staged a number of ‘forest satyagrahas’. In Sind, Muslims traders and peasants enthusiastically took part in khilafat call. In Bengal too, there was seen a great communal unity.

Question 4.
What had happened in Chauri Chaura that Gandhiji called off his Non-Cooperation movement?
Answer:
Mahatma Gandhi was against violence. He abruptly called off the Non-Cooperation movement in February. 1922 when a crowd of peasants set fire to a police station in Chauri Chaura. 22 policemen were killed. The peasants were provoked because the police had fired on their peaceful demonstration.

Question 1.
How did the Non-cooperation Movement gain momentum through 1921-22? Explain.
Answer:
The Non-Cooperation Movement gained momentum through 1921 – 22. Thousands of students left the schools and colleges that were controlled by the government. Many lawyers such as Motilal Nehru, C.R. Das, C.Rajagopalachari and Asaf Ali gave up their practices. British titles that were awarded to several of the Indians were surrendered.

Legislatures were boycotted. People lit public bonfires of foreign cloth. The import of foreign cloth fell drastically between 1920 and 1922. But all this was seen as merely the tip of the iceberg. The large parts of the country were on the brink of a formidable revolt.

Along with his fellow B.K. Dutt, Bhagat Singh threw a bomb in the Central Legislative Assembly on 8th April 1929. The aim was not to kill but “to make the deaf hear”, and to remind the foreign government of its callous exploitation. Bhagat Singh was tried and executed at the age of 23.

Question 3.
Explain the Rowlatt Satyagraha in brief.
Answer:
In 1919, Gandhiji gave call for a satyagraha against the Rowlatt Act that the British had just passed.

Look at the pictures given below and answer the questions. 1. Name the Book written by Dada Bhai.
2. What was described in the Book?
Answer:
1. ‘Poverty and unbritish rule of India’.
2. The book offered a scathing criticism of the economic impact of British rule. 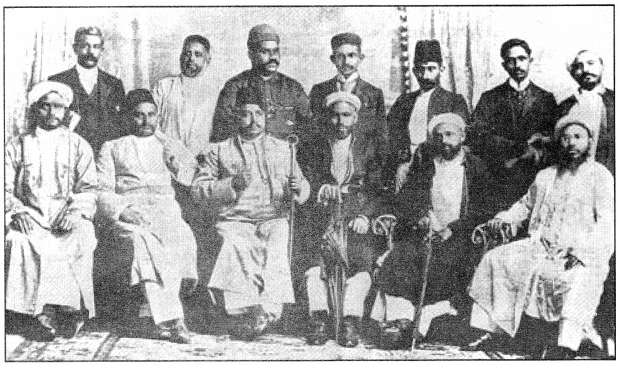 1. What does the picture shows.
2. What was the purpose behind the establishment of Natal Congress?
Answer:
1. It shows the founders of the Natal Congress, Durban, South Africa, 1895.
2. In 1895, along with other Indians, Mahatma Gandhi established the Natal Congress to fight against racial discrimination.

Look at the map given below and answer the following questions:

Question 1.
Show the following states:
(i) State in which Jallianwala Bagh incident took place?
(ii) Where did ‘forest Satyagrahas’ took place?
(iii) Name the state where Swadeshi Movement was strongest in action.
Answer: 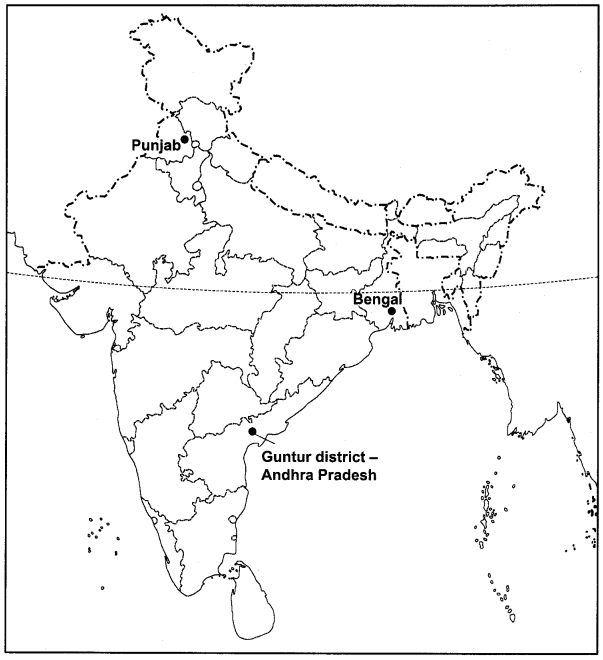