You can also practice NCERT Solutions for Class 8 History Chapter 10 Questions and Answers on LearnInsta.com.

Question 2.
What is meant by portraits?
Answer:
The life size images that look lifelike and real.

Question 3.
Define the term convention.
Answer:
Convention is an accepted norm or style.

Question 4.
Who painted the potrait of Nawab Muhammad Ali Khan of Arcot?
Answer:
It was painted by George Willison.

Question 5.
When did Tipu Sultan of Mysore finally get defeated?
Answer:
He was finally defeated in 1799.

Question 7.
What do you understand by the term Mural?
Answer:
Mural is a wall painting done by the local artists.

Question 9.
By whom was the Damayanthi was painted?
Answer:
By Raja Ravi Varma.

Question 11.
What is Mural?
Answer:
Mural is a wall painting.

Question 12.
Where is Clive street located?
Answer:
It is located in Calcutta.

Question 13.
From where does Mohammad Ali Khan belongs to?
Answer:
He belongs to Arcot.

Question 14.
Where does Tipu Sultan ruled?
Answer:
In Mysore.

Question 15.
By whom was the storming of seringpatnam painted?
Answer:
By Rober Kerr Porter.

Question 16.
Who was Samuel Bourne.
Answer:
He was a photographer.

Question 17.
When was Tipu Sultan defeated?
Answer:
He was defeated in 1799.

Question 18.
What is meant by life study?
Answer:
It is the study of human figure from living models where pose for the artists.

Question 1.
What did the British want from images made by the local painters?
Answer:
The British wanted the images through which they could understand India, remember their life in India, and depict India to the western world.

Question 2.
Define the term perspective and how it was used by the local miniature artists at Murshidabad. Answer:
Perspective: The way that objects appear smaller when they are further away and the way parallel lines appear to meet each other at a point in the distance. Local miniature artists use perspective by using light and shades to make the figures look life like and real.

Question 4.
Briefly explain about the incidence after the Battle of Plassey.
Answer:
The British defeated Sirajuddaulah in the famous battle of Plassey and after his defeat Mir Jafar was installed as the nawab of Murshidabad. It was the victory won through the conspiracy and traitor Mir Jafar was awarded the title of Nawab.

In the painting oy Francis Hayman in 1762 which was placed on public display in the Vauxhall Gardens in London, this act of aggression and conquest is not depicted. The picture shows Lord Clive being welcomed by Mir Jafar and his troops after the Battle of Plassey.

Question 2.
Who was Raja Ravi Varma? How did Ravi Varma’s mythological painting become the rage among Indian princes and art collectors?
Answer:
Raja Ravi Varma was one of the 1st artists who tried to create a style that was both modern and national. Ravi Varma belonged to the family of the Maharajas of Travancore in Kerala, and he was addressed as Raja. He mastered the western art of oil painting and realistic life study, but painted themes from Indian mythology.

He dramatised on canvas, scene after scene from the Ramayana and the Mahabharta, drawing on the theatrical performance of mythological stories that he witnessed during his tour of the Bombay Presidency.

From 1880’s Ravi Varma’s mythological paintings became the rage among Indian princes and art collectors, who filled their palace galleries with his works.

1. Who was the painter of the following painting? 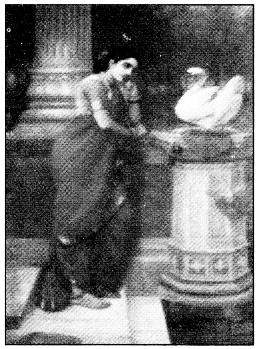 2. What does the pictures describes? 3. whom does the portrait belongs to. 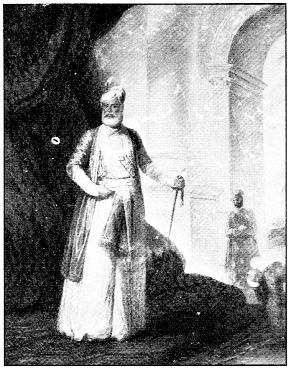