You can also practice NCERT Solutions for Class 7 Geography Chapter 3 Questions and Answers on LearnInsta.com.

Question 3.
What is the result of movement of the Lithospheric plates?
Answer:
The movement of these plates causes changes on the surface of the earth.

Question 4.
What is volcano?
Answer:
A volcano is a vent (opening) in the earth’s crust through which molten material erupts suddenly.

Question 5.
What is earthquake?
Answer:
Vibration in the surface of earth is called earthquake.

Question 8.
What are distributaries?
Answer:
As the river approaches the sea, the speed of the flowing water decreases and the river begins to break up into a number of streams called distributaries.

Question 7.
How do the deltas form?
Answer:
Each distributary forms its own mouth. The collection of sediments from all the mouths forms a delta.

Question 8.
What are Glaciers?
Answer:
Glaciers are rivers of ice.

Question 10.
Name the active agent of erosion and deposition in the deserts.
Answer:
The wind.

Question 11.
What do you understand about mushrooms rocks?
Answer:
In the desert areas, wind makes rocks in shape of a mushroom called mushroom rocks.

Question 2.
How can the impact of earthquake be minimized?
Answer:
Although earthquake cannot be predicted but impact can be minimized. Selecting safe spot, staying away from fire places, chimneys etc., and be preparation are the measures which may be helpful as safeguards.

Question 3.
How are sea caves and sea arches formed?
Answer:
The erosion and deposition of the sea waves gives rise to coastal landforms. From the striking of sea waves to the rocks, hollow like caves are formed in the rocks which are called sea caves. When these cavities become bigger and bigger only the roof of the caves remains, thus forming sea arches.

Question 4.
What is focus and epicentre?
Answer:
The place in the crust where the movement starts is called the ‘focus’ and the place on the surface above the focus is called the ‘epicentre’. Greatest damage is usually closest to the epicentre and the strength of the earthquake decreases away from the centre.

Question 6.
What is called sand dunes loess?
Answer:
In the desert areas, when the wind stops blowing, the sand falls and gets deposited in low hill like structures. These are called sand dunes. When the grains of sand are very fine and light, the wind can carry it over long distances, when such sand is deposited in large areas, it is called loess.

Question 2.
Write a short note on Waterfall.
Answer:
The running water in the river erodes the landscape. When the river tumbles at steep angle over very hard rocks or down a steep valley side it forms a waterfall.

There are thousands of small waterfalls in the world. The highest waterfall is Angel Falls of Venezuela in South America. The other waterfalls are Niagara falls located on the border between Canada and USA in North America and Victoria Falls on the borders of Zambia and Zimbabwe in Africa. 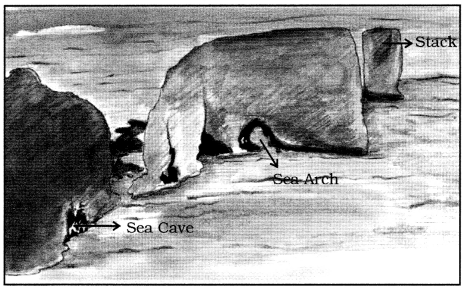