You can also practice NCERT Solutions for Class 7 History Chapter 4 Questions and Answers on LearnInsta.com.

Question 1.
Mention the year in which Mughal Empire was established in India.
Answer:
In 1526.

Question 3.
When was Delhi recaptured by Humayun?
Answer:
In 1555, Humayun recaptured Delhi.

Question 4.
What was the age of Akbar when he became emperor? *
Answer:
He was only 13 years old.

Question 8.
Who was Dara Shukoh?
Answer:
Dara Shukoh was son of Shah Jahan.

Question 11.
Name the Mughal descendants.
Answer:
The Mughals were descendants (offspring) of two great lineages of rulers; from the mother side Genghis Khan and from father’s side Timur.

Question 23.
What do you mean by ‘suba’ and ‘subadar’?
Answer:
Akbar’s empire was divided into provinces called subas, governed by subadar. Subadar carried out both political and military functions.

Question 24.
Who was called diwan under Mughal administrative system?
Answer:
Each province had a financial officer who was called ‘diwan’.

Question 25.
What was the main ethics of ‘sulh-i-kul’ established by Akbar?
Answer:
‘Sulh-i-kul’ was focused on a system of ethics—honesty, justice and peace.

Question 3.
What do you know about term ‘zamindar’?
Answer:
To describe the intermediaries, whether they were local headmen of villages or powerful chieftains the term used was ‘zamindar’. Peasants paid taxes through this zamindar.

Question 4.
Who provided support to subadar?
Answer:
The subadar was supported by other officers such as military paymaster (bakhshi), the minister in charge of religious and charitable patronage (sadr), military commanders (faujdars) and the town police commander (kotwal).

Question 5.
Write about ‘sulh-i-kul’?
Answer:
‘Sulh-i-kul’ is a Persian ward which means ‘universal peace’. As a strong administrative function, Akbar established ‘sulh-i kul’. It did not allowed discrimination between people of different religions in his realm. While, it was focused on a system of ethics-honesty, justice and peace that was universally applicable.

Question 1.
What efforts were undertaken by Mughal to make them stronger?
Answer:
The Mughal rulers campaigned constantly against rulers who refused to accept their authority. Many rulers also joined them voluntarily. The Rajputs are a good example of this. Many of them married their daughters into Mughal families and received high positions.

Question 2.
Who were ‘mansabdars’ and how was ‘Zat’ important for them?
Answer:
The Mughals recruited diverse bodies of people. Those who joined Mughal service were enrolled as mansabdars. These mansabdars held a mansab. Rank, salary and military responsibilities of the mansabdars were determined by grading system.

Rank and salary were determined by a numerical value called zat. The higher the zat, the more prestigious was the noble’s position in court and the larger his salary.

(ii) Mansabdars received their salaries from the revenue collected under their mansab.

Question 4.
Describe the work of Todar Mai undertaken for lands and taxes.
Answer:
Todar Mai carried out a careful survey of crop yields, price and areas cultivated for a 10-years period, 1570-1580. On the basis of this data, tax was fixed on each crop in cash. Each province was divided into revenue circles with its own schedule of revenue rates for individual crops. This revenue system was called ‘zabt’. It was prevalent in those areas where Mughal administrators could survey the land and keep very careful accounts.

Question 5.
Describe about “Akbar Nama” and its volume?
Answer:
Abul Fazl wrote a three-volume history of Akbar’s reign, titled “Akbar Nama”. The first volume dealt with Akbar’s ancestors and the second volume recorded the events of Akbar’s reign. The third volume is the Ain-i-Akbari, it deals with Akbar’s administration, household, army, the revenues and the geography of his empire.

It also provides rich details about the traditions and culture of the people living in India. The most interesting aspect about the Ain-i-Akbari is its rich statistical details about things as diverse as crops, yields, prices, wages and revenues.

Question 1.
Find out military campaigns under Akbar and Aurangzeb: 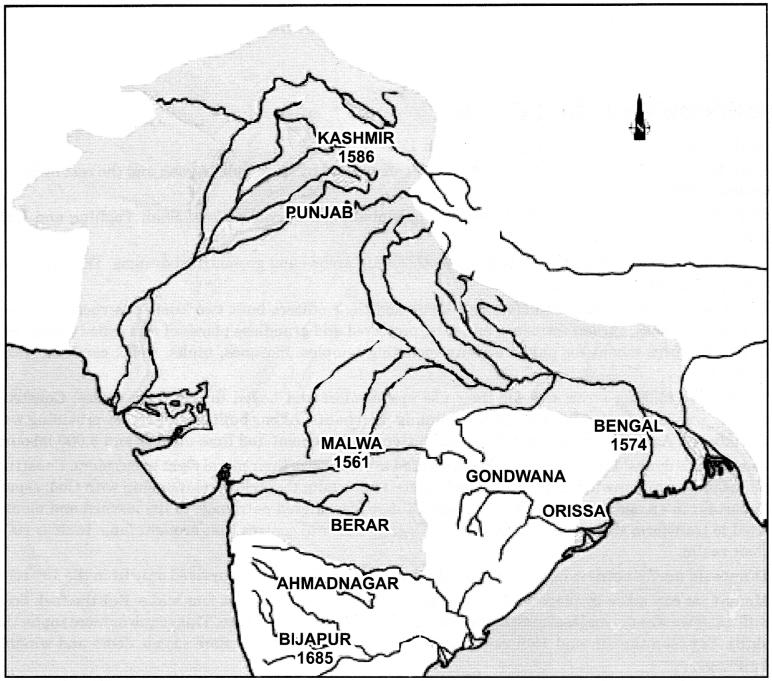