You can also practice NCERT Solutions for Class 8 History Chapter 5 Questions and Answers on LearnInsta.com.

Question 3.
What did the new act in 1858 mention?
Answer:
The new act of 1858 transferred the power of the East India Company to the British Crown.

Question 4.
What was the proportion decided for the new recruitment process for soldiers adopted after 1857 revolt by the British.
Answer:
It was decided that the proportion of Indian soldiers in the army would be reduced and number of Europeans would be increased.

Question 7.
What is the term Mutiny means?
Answer:
When soldiers as a group disobey their officer in the army, that situation is known as mutiny.

Question 9.
What was the decision of the British after they regained control over India after 1857 revolt?
Answer:
The British had decided that they could not carry on ruling the land with the same policies any more.
So they decided to introduce several changes in their policies.

Question 10.
What was there for the ruling chief in the new policies adopted by the British after the Revolt in 1857 ended?
Answer:
The ruling chiefs of the country were assured about their territory that it would never be annexed in future, and were allowed to pass on their kingdoms to their heirs, including the adopted sons.

Question 11.
What did the British thought earlier about the rebel?
Answer:
They thought that the disturbance caused by the issue of the cartridges would die down. But nothing happened in the way British thought.

Question 14.
What action did Company took for ‘pleas urged by the ruling families?
Answer:
Company rejected their negotiation pleas.

Question 15.
What was another reason behind the angry of sepoys?
Sepoys reacted in angry to the conditions of countryside also.

Question 4.
What made the Indian rebelled against Britisher and how they all decided that British is the only enemy to them?
Answer:
Indians rebelled against the policies of British. They believed in common manner that they all have only an enemy and that is British. People started organism themselves, communication and taking initiatives and displaying confidences to them the situation around.

Question 5.
What was the reason behind the capture of Awadh by the Company?
Answer:
In 1856 the Awadh was taken over after the event of 1801 when subsidiary alliance was imposed on Awadh. And the territory was declared being misgoverned and British rule was imposed in order to ensure a proper administration.

Look at the picture given below and answer the following questions//: 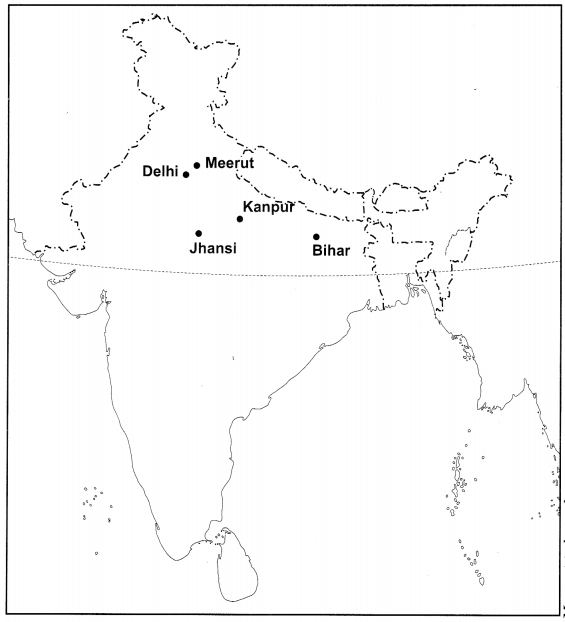