Question 1.
The following are the dictionary entries for some of the words that appear in ‘The Mystery of Bermuda Triangle’. Study the words and their meanings before you read the mystery for better comprehension.

Answer :
Students to read. NO questins have been asked in it.

Question 3.
Discuss in groups
(a) Have you heard of the Bermuda Triangle? If so, what have you heard about it?
(b) Have you ever heard of an airplane or a boat disappearing without a trace?
(c) Can you think of an explanation for an airplane or a boat that disappeared without a trace?
Answer :
(a) Yes, I have heard something of the Bermuda Triangle. I have heard that it is a part of land and sea near America. It draws down aeroplanes flying over it. I have also heard that many accidents have occurred here, like aeroplanes disappearing without any trace or ships sinking mysteriously. But I was never sure of these things.
(b) Yes, I have heard of it over here but not clearly.
(c) I can’t think of any explanation of the disappearing of an aeroplane or a boat without a trace. But I feel that some mysterious things do occur in nature. These surely may be the causes of such unbelievable mishaps

Question 4.
Work in pairs and complete the table of the supernatural theories and logical explanations as presented in ‘The Mystery of Bermuda Triangle. 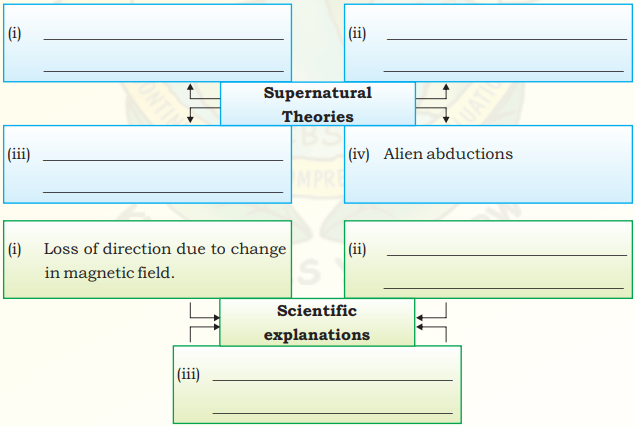 Answer :
For working in pairs at class level.
Supernatural Theories :

Scientific Explanations :
(i) loss of direction due to change in magnetic field
(ii) unpredictable weather
(iii)

Question 5.
Listen to an interview between a radio jockey and a pilot.
Pilot : Yes, I was on board the plane & I rogered my position to the control room. But later on all of a sudden something strange happened. There was a lot of distance.
Interviewer : Did you try to contact the control room.
Pilot : I was trying to send SOS to the control room but there was just a crackle. I was surrounded by mist and cloud and something strange happened. I felt I was engulfed in a time-warp. I entered the cloud and then I stepped into the period of French Revolution.
Interviewer : You mean you travelled back in time to the French Revolution period.
Pilot : Exactly! I was perplexed.
Pilot : When I returned I tried to share it with my friends and other people, but they hardly believed me. Not exactly! I perfectly understand them. If I was in their shoes I would do exactly the same.
Answer :
No Question asked.

Question 6.
(а) In groups of four prepare a questionnaire for a pilot who has survived the Bermuda Triangle. Use the hints given below.

(b) On the basis of the questionnaire, hold a conversation with your partner- one can be a radio jockey and the other could be the pilot.
Answer :
Students can hold a conversation with their partner at class level giving full shape to the above points of a questionnaire. One sample answer is given below :
Radio Jockey : Congratulations ! By the grace of God you survived the possible crash. Can you tell us what actually happened ?
Pilot : Yes, I am lucky. Thank you. Well, something mysterious occurred. Before this mysterious occurrence everything was normal. I was flying well in a clear sky. But suddenly the blip on my radar started followed by a crackling sound. I tried to contact the Control Tower but could not.
Radio Jockey : Can you tell what happened thereafter ?
Pilot : Yes ! I do not know exactly what had happened thereafter. However, I remember hearing mysterious cries of some fight, may be, between the police and the public. I thought that I had died, was suddenly reborn and was in my youth.
Radio Jockey : How did you survive ?
Pilot : Well, I remember, though faintly, that my aeroplane suddenly went into a tailspin and crash-landed at a small island. Luckily, I was able to contact the Control Tower and was rescued.
Radio Jockey : It is really a strange occurrence.
Pilot : Well it is, but I have no proof of it all.

Question 7.
In groups of six, work on one of the mysteries given below by surfing the net and through other sources. Make a power point presentation. 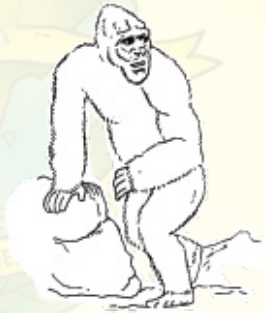 Answer :
Working in groups of six at class level. Students should surf the internet and collect enough material on the individual sources to make a convincing presentation. Some useful information relating to each of these items is given below :
1. Yeti, tha Abominable Snowman :
The ‘Abominable Snowman/Yeti’ like the ‘Big Foots’ of the North American Continent, has been in existence for 6000 years. Unlike ‘Big Foot’, the Yeti did not evolve from an animal species, they evolved from the ‘caveman’. They can be found in China, the Himalayas and on up into the former Soviet Union to Siberia. The total Yeti population is said to be around 227. Their average life span is between 120 and 130 years. They are ‘carnivorous’. In 1996, 2 hikers in Nepal mountains took an amazing video of an age like creature walking upright along the slopes.

Many expeditions have attempted to prove the Yeti’s existence but no scientific evidence has confirmed it. The abominable snowman, as it is commonly called, has been sighted in the Himalayan mountains over 100 years. Sir Edmund Hillary and Tenzing Norgay reported seeing large footprints while scaling Mount Everest in 1953.

The Yeti has become a cultural icon, appearing in movies, literature, music, and „ video games. Significant film appearances include The Snow Creature (1954), The Abominable Snowman (1957) etc.

2. Loch Ness ‘monster’ :
The Loch Ness ‘monster’ known as ‘Nessie’ is an alleged plesiosaur-like creature living in Loch Ness. It is a long, deep lake near Inverness, Scotland. Many sights of the monster have been recorded, going back to St. Columbia, the Irish monk who converted most of Scotland to Christianity in the 6th century.

Dr. Robert Kenneth Wilson, a London physician, photographed a plesiosaur-like beast. It had a long neck emerging out of the murky waters—modern legend of‘Nessie’ started then. Scientists examined the photo, said it could be an otter or a plesiosaur, or a tree ! trunk Now sightings have grown less. ‘Loch Ness Project’ believes it is due to people growing sceptical.

Story of Loch Ness ‘monster’ has been around for more than 1500 years. Monster may be a fish, a whale, or a wave. The BBC claims Nessie the plesiosaur doesn’t exist.

UFO reports increased after the first widely publicized US sighting reported by private pilot Kenneth Arnold in 1947. The term UFO is popularly taken as a synonym for alien spacecraft. Such objects include meteors, disintegrating satellites, flocks of birds, aircraft, lights, weather balloons and just anything moving with the visible band of electromagnetism.

There are no confirmed scientific proofs of the existence of UFOs.

4. Lost City of Atlantis :
Atlantis, a legendary island first mentioned in Plato’s dialogues Timaeus and Critias. Atlantis was a naval power lying in front of the ‘Pillars of Hercules’ that conquered many parts of Western Europe and Africa 9000 years before the time of Solon, or approximately 9600 BC. After a failed attempt to invade Athens, Atlantis sank into the ocean ‘in a single day and night of misfortune’.

Atlantis inspires today’s literature from science fiction to comic books to films. Its name has become a byword for any and all supposed advanced prehistoric lost civilizations.

Atlantis, if it were a real place, could be found west of the strait of Gibraltar near the Azores Islands. Ignatius Donnelly, an American politician, published a book in 1882 titled Atlantis, the Antediluvian World believed that Plato’s story represented historical fact. He located it in the middle of the Atlantic Ocean, suggesting the Azores Islands represented what remained of the highest mountain peaks. But Donnelly’s theory has been found to be faulty. Explorer Percy Fawcett thought it might be located in Brazil.

K.T. Frost of Queen’s University in Belfast suggested that instead of being west of the Pillars of Hercules, Atlantis was east. He also thought that the catastrophic end of the island had come not 9000 years before Plato’s time, but only 900. The land of Atlantic, in that case, could be a well-known place in Plato’s time : The island of Crete, now is a part of modern Greece lying south of Athens across part of the Mediterranean Sea. Before 1500 BC, it was the seat of the Minoan Empire. The Minoans dominated the eastern Mediterranean with a powerful navy. The Minoan Crete was probably one of the most sophisticated cultures of its time. It had splendid architecture and art. A code of laws gave women equal legal status to men. Agriculture was highly developed and an extensive irrigation system existed.

5. Crop Circles :
A crop circle is a sizable pattern created by the flattening of a crop such as wheat, barley, rye or maize. Pranksters Doug Bower and Dave Charley started a phenomenon in 1978 by making actual circles on crops with simple tools. But these assumed strange shapes resembling extraterrestrials.

Various investigators came out with strange theories behind these. Some offered scientific methods results including electromagnetic radiation as the cause of flattening generated even further controversy.

Crop circles have affected people differently. These have acted as catalyst to learning, understanding and spirituality as we strive to understand the meaning and purpose behind the genuine crop circles. The purpose is to spread love and understanding around the globe—to unite the humanity through love.