Question 1.
If you could buy your dream house today what are some specific features you would want for your house? Write them in the bubbles below.

Question 2.
Discuss with your partner the similarities and in your dream house.
Answer
To be discussed with a partner at class level. Some hints are given below to enable a healthy discussion.
Houses of all may not conform to the physical features of an ideal house given above under 1. So students can discuss the difference on the following points :

Students shall note that all don’t or may not have good or ideal houses. Some live in posh localities, some in semi-urban areas, while some in not-so-good houses. The above points can be the heads under which they can discuss the similarities and dissimilarities. They can add a few more features on their own.

Question 4.
Copy and complete the following paragraph about the theme of the play using the clues given in the box below. Remember that there are more clues than required.

Answer
1. Jeanne wants to buy a Villa because she doesn’t have a proper and commodious house. As per Gaston, she wants to buy the Villa for her parents and sister’s children to live in it. But it seems clear that she is not much impressed that a Villa has all the modern facilities like electricity, gas, water, telephone, drainage etc.

2. Gaston is not interested in buying the Villa in the beginning. It is because he doesn’t want that Jeanne’s parents and her sister’s children should live in it. He says he is not fond of her family. Then he can’t spare the money as he doesn’t want to pay for it.

4. Yes, Juliette sticks to her words as far as selling is concerned. Luckily, things turn out to be in her favour. Gaston remains seated while she and Jeanne go upstairs. Mrs. Al Smith is in a hurry to buy the Villa. She comes. She strikes a deal with Gaston presuming him to be the houseowner. Gaston sells it at 3,00,000 francs and buys the Villa at 2,00,000 francs. Juliette doesn’t know it. But she is happy that the deal has occurred even though she wanted to sell it at 1,00,000 francs.

5. Seeing the situation given in the play we would say that Gaston is better in business. It is because he earns a neat 1,00,000 francs without investing even a single penny. It means business is simply making money by hook or (by) crook. However, the event given in the play is unlikely to occur in real-life situations. We can call it a shady deal not capable of holding good.

Juliette can also be said to be better in business on one premise. It is that she strikes a fair deal with Gaston, though it may be open to scrutiny. But she is better than Gaston as legally she is right. But Gaston will fall flat when the law shall take its own course in his case.

6. We have some mixed feelings about Gaston. He is a specimen of meanness, greediness, cleverness, craftiness, dishonesty. He can’t be defended as a good person. So we have utter dislike for him. First, he is non-cooperative and uncaring for his wife. He is cruel in his behaviour towards Jeanne. He shows his meanness in telling his hatred for her parents. He has spent her dowry and has grown fat on it. He is a cheater and an impostor in striking a deal with Mrs. Al Smith. He proves heavy on her due to his greed, craftiness and black villainy. How shrewdly he has made 1,00,000 francs without spending a single penny ! It is something that defines him!

Question 6.
Read the following extracts and answer the questions that follow by choosing the correct options:
(A) But the sign has been hanging on the gate for over a month now and I am beginning to be afraid that the day I bought it was when I was the real fool.
(а) Why is Juliette disappointed ?

(b) Why does she call herself a fool ?

(B) ‘But your parents would take possession of it, every year from the beginning of spring until the end of September. What’s more they would bring the whole tribe of your sister’s children with them.’
(a) What does Gaston mean by ‘take possession’ ?

(C) ‘While you were upstairs, I have been thinking a lot about your Papa and Mamma.’
(a) What is the discrepancy between what Gaston said earlier and what he says now ?

(b) What does the above statement reveal about Gaston’s character ? 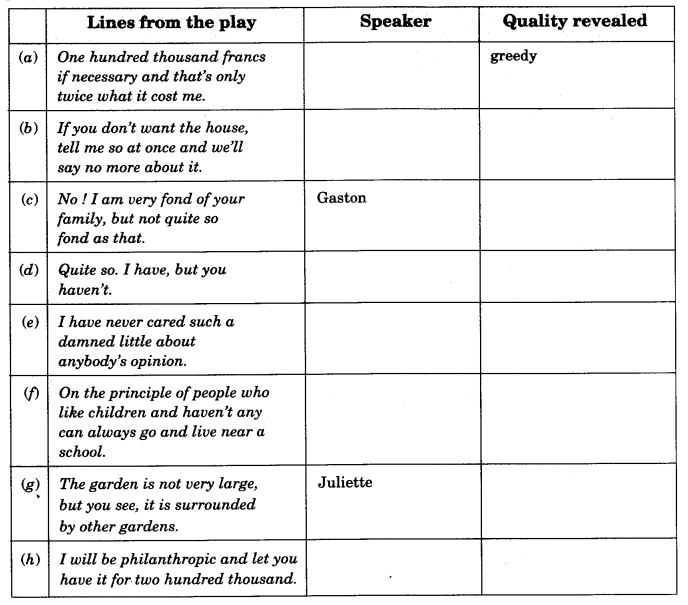 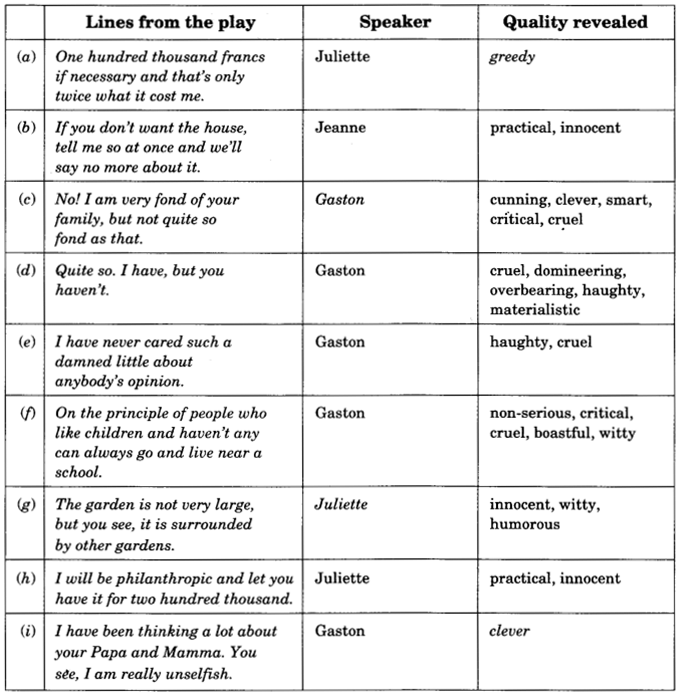 He said that he had spent that long ago. But I know he had made a fortune on it. Then he developed hatred and contempt for my parents. How stupid of him! He is greedy, cruel and dishonest. How craftily he sold Mrs. Juliette’s Villa to one Mrs. Al Smith for 3,00,000 francs! He posed before her that he was the Villa owner. Strangely, he bought the same from her for 2,00,000 francs. Thus without spending a penny from his side, he made 1,0,000 francs deceiving Mrs. Juliette. I am ashamed of such a greedy, cruel and mean person. I hate him to (from) the core of my heart. I will never forgive him. I’ll see what I should do to deal with such a crooked person.
Jeanne

Question 10.
Now dramatise the play. Form groups of eight to ten students. Within each group, you will need to choose

Within your groups, do ensure that you

STAGING
The stage can be very simple, with exits on either side representing doors to the outside and to the rest of the house respectively.
Answer
All these directions are to be followed while staging the play at class level. This staging is teacher-centric, that is, mainly because of him. So he should ensure that the spirit of the play is properly displayed through acting, dialogue, facial expressions, dresses, ages, body language, etc.