Question 1.
Talk to two workers (for example, construction workers, farmworkers, factory workers, workers at any shop) to find out if they are receiving the minimum wages \ laid down by law.
Answer:

Question 2.
What are the advantages to foreign companies in setting-up production in India?
Answer:
Foreign countries have many advantages of setting up their factories in India like:

Question 3.
Do you think the victims of the Bhopal gas tragedy got justice? Discuss.
Answer:
No, the victims of the Bhopal Gas Tragedy did not get justice. After 24 years, people are still fighting for justice for safe drinking water, for healthcare facilities, and jobs for the people poisoned by UC. Anderson, the UC chairman, who faces criminal charges, is not yet put behind the bars.

By enforcing and upholding these laws, the government can control the activities of individuals or private companies so as to ensure social justice. Enforcement is even more important when the law seeks to protect the weak from the strong.

Question 5.
How can laws ensure that markets work in a manner that is fair? Give two examples to support your answer.
Answer:
Markets everywhere tend to be exploitative of people—whether as workers, consumers, or producers.
To protect people from such exploitation, the government makes certain laws. These laws try to ensure that unfair practices are kept at a minimum in the markets.

For example, private companies, contractors in the drive for profits might deny workers their rights and not pay them proper wages. To ensure that workers are not underpaid, or are paid fairly, there is a law on minimum wages.
Laws have also been made for adulteration, black-marketing, etc.

Question 6.
Imagine yourself be a worker working in a chemical factory, which has received orders from the government to move to a different site 100 kms away from the present location. Write about how your life would change? Readout your responses in the classroom.
Answer:
My life would change drastically.

Question 7.
Write a paragraph on the various roles of the government that you have read about in this unit.
Answer:

Question 8.
What are the sources of environmental pollution in your area? Discuss with respect to
(a) air
(b) water
(c) soil.
What are the steps being taken to reduce pollution? Can you suggest some other measures?
Answer:
Causes of Pollution in our Area:
(a) Air pollution: Vehicles, thermal power station.
(b) Water pollution: Dry latrines, severe age water, water drawing industries, tanneries.
(c) Soil: Industrial effluents and ash of the thermal power station.

Steps being taken to reduce the pollution:

Question 9.
How was the environment treated earlier? What has been the change in perception? Discuss.
Answer:
Earlier there were very few laws protecting the environment in India. There was hardly any enforcement of these laws. The environment was treated as a ‘free’ entity and any industry could pollute the air and water without any restrictions.

Now there has been a change in perception. The government has introduced laws on the environment. The polluter is to be held accountable for the damage done to the environment. The courts have also given a number of judgments upholding the right to a healthy environment as intrinsic to the fundamental right to life. The government has set up laws and procedures that cap check pollution, clean rivers, and introduce heavy fines for those who pollute.

Question 10.
What do you think the famous cartoonist R.K. Laxman is trying to convey in this cartoon?
Answer: 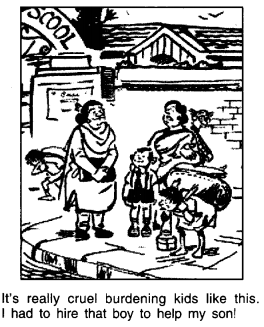