Read the following extracts and answer the questions that follow choosing the correct options from, among the given ones :

I. In the chaos and confusion, two of his children caught hold of the hands of their mother’s father and mother’s brother, and rushed in the opposite direction. He never saw them again. His wife was also swept away. Only the three other children who came with him were saved. – (Page 25)

Multiple Choice Questions
1. These lines have been taken from the lesson named
(a) Tsunami
(b) The best Christmas present in the world
(c) The Summit Within
(d) This is Jody’s Fawn.

3. They ran in the opposite direction because of
(a) chaos
(b) Tsunami
(c) confusion
(d) his parents.

II. Almas Javed was ten years old. She was a student of Carmel Convent in Port Blair where her father had a petrol pump. Her mother Rahila’s home was in Nancowry island. The family had gone there to celebrate Christmas. (Page 26)

III. “The water was swelling and kept coming in,” Penny Smith remembered. “The beach was getting smaller and smaller. I didn’t know what was happening.” (Page 27)

Multiple Choice Questions
1. The water referred to in the above lines is
(a) the boiling water in a pot
(b) the water of a river
(c) the sea water
(d) none of the above.

IV. The family took refuge in the third floor of the hotel. The building withstood the surge of three tsunami waves. If they had stayed on the beach, they would not have been alive. (Page 28)

Questions
1. Which family is being talked of here ?
2. What was threatening their lives ?
3. Where were they before coming to this building ?

Answers
1. It was a family of Smiths.
2. Tsunami was threatening their lives.
3. They were at the sea-beach.

V. Many people believe that animals possess a sixth sense and know when the earth is going to shake. Some experts believe that animals’ more acute hearing helps them to hear or feel the earth’s vibration. They can sense an approaching disaster long before humans realise what’s going on. (Page 29)

Multiple Choice Questions
1. How many senses do the humans have ?
(a) seven
(b) eight
(c) four
(d) five.

BEFORE YOU READ (Page 24)
Look at the map of the Andaman and Nicobar islands given here.

Now read the sentences below. Rewrite the incorrect ones after correcting the mistakes.
1. Katchall is an island
2. It is part of the Andaman group of islands.
3. Nancowry is an island in the Nicobar group.
4. Katchall and Nancowry are more than a hundred miles apart. (Hint: the scale of the map is given.)
5. The Andaman and Nicobar Islands are to the west of India.
6. The Nicobar islands are to the north of the Andaman Islands. 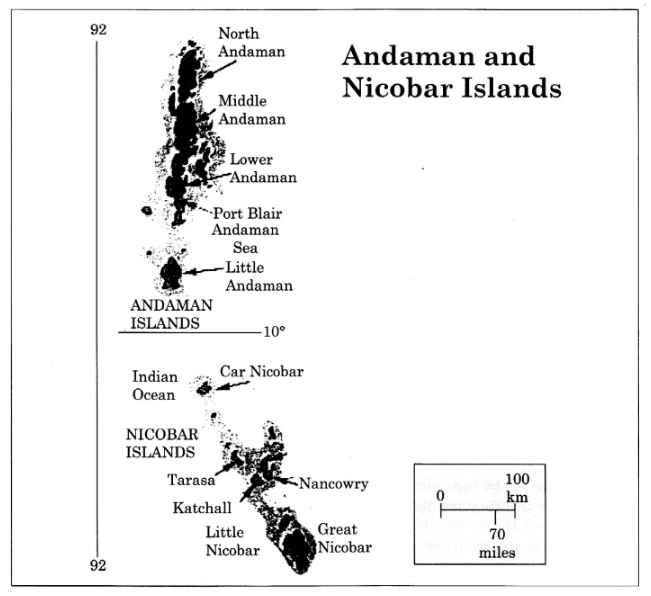 COMPREHENSION CHECK (Page 27)
Say whether the following are True or False.
1. Ignesious lost his wife, two children, his father-in-law, and his brother-in-law in the tsunami.
2. Sanjeev made it to safety after the tsunami.
3. Meghna was saved by a relief helicopter.
4. Almas’s father realised that a tsunami was going to hit the island.
5. Her mother and aunts were washed away with the tree that they were holding on to.

COMPREHENSION CHECK (Pages 28-29)
Answer the following in a phrase or sentence.
1. Why did Tilly’s family come to Thailand ?
2. What were the warning signs that both Tilly and her mother saw ?
3. Do you think Tilly’s mother was alarmed by them ?
4. Where had Tilly seen the sea behaving in the same strange fashion ?
5. Where did the Smith family and the others on the beach go to escape from the tsunami ?
6. How do you think her geography teacher felt when he heard about what Tilly had done in Phuket ?

Answers
1. Tilly’s family came to Thailand to celebrate Christmas.
2. Both of them saw the sea rise and start to foam, bubble and form whirlpools.
3. No, Tilly’s mother was not alarmed by them.
4. In the video which her geography teacher had shown to the class.
5. They went to the third floor of the hotel to escape from the tsunami.
6. The geography teacher must have felt very pleased and satisfied.

Answers
1. Only a few.
2. 60 people and two animals.
3. They say that they saw them running from the beach. The elephants had sensed it an hour before the tsunami hit the coast.
4. They refused to go to the beach for their daily runs.

WORKING WITH THE TEXT (Page 30)
Discuss the following questions in class. Then write your own answers.

Question. 1.
When he felt the earthquake, do you think Ignesious immediately worried about a tsunami ? Give reasons for your answer. Which sentence in the text tells you that the Ignesious family did not have any time to discuss and plan their course of action after the tsunami struck ?

Answer:
No. When he felt the earthquake, Ignesious did not think about the tsunami. He thought only of the tremors. That was why he took his television off the table and put it on the ground. Ignesious family did not have any time to discuss and plan their course of action. That was why, there was only chaos and confusion. The following sentence tells it clearly.

“In the chaos and confusion, two of his children caught hold of the hands of their mother’s father and mother’s brother and rushed in the opposite directions.” (Page 14)

Question. 2.
Which words in the list below describe Sanjeev, in your opinion ?
(Look up the dictionary for words that you are not sure of.)

Answer:
The words ‘brave’, ‘heroic’ and ‘selfless’ describe Sanjeev, as I feel.
(i) ambitious or brash
(ii) heroic and selfless
(iii) careless or humorous

Question. 3.
How are Meghna and Almas’s stories similar ?

Answer:
Meghna and Almas were both lucky survivors. Meghna was swept away with her parents and seventy seven other people. All but Meghna died. She floated on a wooden door for two days. Relief helicopters did not see her but a wave brought her back to the shore.

Similarly, all the members of the family of Almas Javed were swept away by the tsunami. She climbed a log of wood. She fainted but remained on it for a long time. She was ultimately saved.

Question. 4.
What are the different ways in which Tilly’s parents could have reacted to her behaviour ? What would you have done if you were in their place ?

Answer:
Instead of heeding to Tilly as they did, Tilly’s parents could have ignored her. Alternatively they could have scolded her and asked her to behave. In either case, they would have all died.

There is no doubt that they made the best move. In their place, I am afraid, I might not have been so wise. I might have asked her not to be panicky or make a scene.

Question. 5.
If Tilly’s award was to be shared, who do you think she should share it with—her parents or her geography teacher ?

Answer:
Tilly’s award should be shared with her geography teacher. It was because of him that Tilly could see the coming tsunami before anyone else.

Question. 6.
What are the two different ideas about why so few animals were killed in the tsunami ? Which idea do you find more believable ?

To me the first idea seems more believable. It is so because many animals get an idea of the coming rains. Now rain has nothing to do with the sense of hearing. So it is more sensible to think that nature has provided them some sixth sense. This helps them get over the crises.

Question 1.
Go through Part-I carefully, and make a list of as many words as you can find that indicate movement of different kinds. (There is one word that occurs repeatedly—count how many times !) Put them into three categories.

Can you explain why there are many words in one column and not in the others ?

There are more words in column no. 1. The reason is the description of tsunami. Tsunami swept away everything very fast. The other word is ‘rushed’. The people who wanted to escape tsunami had to move very fast. So their movement is described by the word ‘rush’.

Question 2.
Fill in the blanks in the sentences below (the verbs given in brackets will give you a clue).
(i) The earth trembled, but not many people felt the___. (tremble)
(ii) When the zoo was flooded, there was a lot of___and many animals escaped into the countryside, (confuse)
(iii) We heard with__that the lion had been recaptured, (relieve)
(iv) The zookeeper was stuck in a tree and his___was filmed by the TV crew, (rescue)
( v ) There was much__in the village when the snake charmer came visiting, (excite)

3. Study the sentences in the columns A and B.

Compare the sentences in A to the ones in B. Who is the ‘doer’ of the action in every case ? Is the ‘doer’ mentioned in A, or in B ?

Notice the verbs in A : ‘was swept away’, ‘was hit’, ‘were washed away’, ‘were found’. They are in the passive form. The sentences are in the Passive Voice. In these sentences, the focus is not on the person who does the action. ,

In B, the ‘doer’ of the action is named. The verbs are in the active form. The sentences are in the Active Voice.

Question 1.
Suppose you are one of the volunteers who went to the Andaman and Nicobar Islands for relief work after the Tsunami. You work in the relief camps, distributing food, water and medicine among the victims. You listen to the various stories of bravery of ordinary people even as they fight against odds to bring about some semblance of normalcy in their lives. You admire their grit and determination. Write a diary entry.
You may start in this way.
31 December, 2016
The killer Tsunami struck these islands five days ago. But the victims are being brought in even now. Each one has a story to tell…

Answer
… All of them rouse our pity. But a few inspire me too. There is an old woman of about 65. She has survived along with her 8 year-old granddaughter. The people in the camp suggest that the granddaughter be sent to an orphanage. The old lady refuses to listen. She says that she will not let her daughter go away from her. In fact she wants no charity. She is willing to do some useful work to help her granddaughter.

Question 2.
The story shows how a little girl saved the lives of many tourists when a tsunami struck the beach, thanks to the geography lesson that she had learnt at school. She remembered the visuals of a tsunami and warned her parents.

Write your experiences in a paragraph of about 90-100 words or narrate it to the whole class like an anecdote.

Answer
The other day I was walking back from school. Suddenly my eyes fell on a cyclist. He seemed to be losing balance. Before I could think of helping him, he had somehow got down the cycle. However, he just left the cycle and lay on the side of the road. He was perspiring and breathing with difficulty. Soon a crowd gathered. I immediately remembered the lesson my biology teacher had taught me. I requested the people to stay away and sent one of them to call a doctor. In the meantime I fanned him to help him get a lot of fresh air. Then very tenderly, I massaged his heart. That was what my teacher had advised me to do. The man felt relief and was breathing easily when the doctor arrived.