Question 1.
Fill in the blanks:
(a) Production of new individuals from the vegetative part of the parent is called ……..
(b) A flower may have either male or female reproductive parts. Such a flower is called ………
(c) The transfer of pollen grains from the anther to the stigma of the same or of another flower of the same kind is known as ………
(d) The fusion of male and female gametes is termed as ……………..
(e) Seed dispersal takes place by means of …….., ………. and ………..
Answer:
(a) vegetative propagation
(b) unisexual flower
(c) pollination
(d) fertilisation
(e) wind, water, animals.

(ii) Budding:
Here, the small bulb-like projection coming out from, the yeast cell is called a bud, gradually grows and gets detached from the parent cell and forms an organism, e.g., yeast. The new yeast grows, matures, and produces more yeasts. If this process continues, a large number of yeasts are produced in a short time.

(iii) Fragmentation:
This type of reproduction is common in algae. These are slimy green patches in ponds, or in other stagnant water bodies. When water and nutrients are available algae grow and multiply rapidly by fragmentation An algae breaks up into two or more fragments. These fragments or pieces grow into new individuals. This process continues and they cover a large area in a short period of time.

(iv) Spore formation:
The fungi on a bread piece grow due to spores which are present in the air. When spores are released, they keep floating in the air. As they are very light, they can travel over long distances. The spores are asexual reproductive bodies. Each spore is covered by a hard protective coat to withstand unfavourable conditions such as high temperature and low humidity. So, they can survive for a long time. Under favourable conditions, a spore germinates and develops into a new individual. Plants such as moss and ferns also reproduce by means of spores. 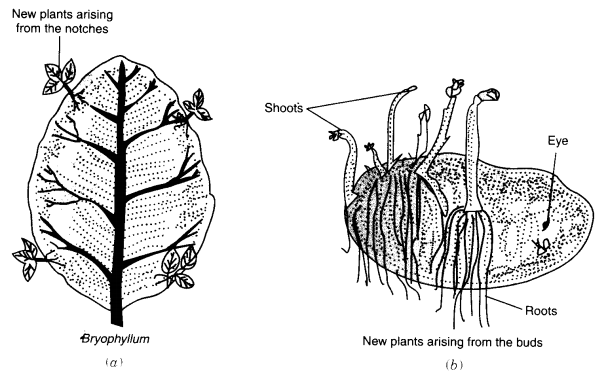 Fig. Vegetative propagation in (a) bryophyllum (by leaf) (b) potato (by the stem)

Question 5.
Sketch the reproductive parts of a flower.
Answer: Fig. Reproductive parts of a flower

Question 6.
Explain the difference between self-pollination and cross-pollination.
Answer:

Question 7.
How does the process of fertilization take place in flowers?
Answer:
When the pollen grain reaches the stigma of the same species flower, it starts growing out into the pollen tube of the stigma. This tube continues to grow inside the style till it reaches the ovule. Male cells are released into the ovule for fertilization with the female egg cell and thus the zygote is formed. After this process of fertilization, the ovary develops into fruit and ovule into seeds.

Question 8.
Describe the various ways by which the seeds are dispersed.
Answer:
Seeds and fruits of plants are carried away in the following ways:
(i) Dispersion by the wind:
Winged seeds such as those of drumstick and maple, light seeds of grasses, or hairy seeds of aak CMadar) and hairy fruit of sunflower gets blown off with the wind to faraway places.

(ii) Dispersion by water:
Some seeds are dispersed by water. These fruits or seeds usually develop floating ability in the form of the spongy or fibrous outer coat as in coconut.

(iii) Dispersion by animals:
Some seeds are dispersed by animals, especially spiny seeds with hooks which get attached to the bodies of animals and are carried to distant places. Examples are Xanthium and Urena.

(iv) Dispersion by explosion:
Some seeds are dispersed when the fruits burst with sudden jerks. The seeds are scattered far from the parent plant. This happens in the case of castor and balsam. 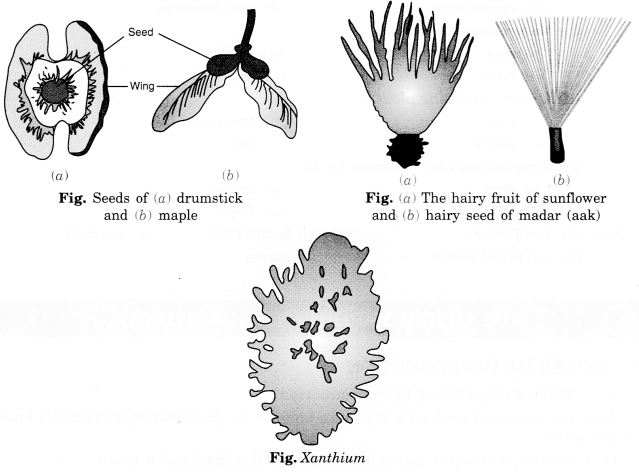