Question 1.
Among the terms listed below, those that are not technically correct names for a floral whorl are
(a) androecium
(b) corolla|
(c) (i) and (iv)
(d) (ii) and (iv)
Answer:
(c) : The technically correct terms for the floral whorls are (from outermost to innermost) calyx, corolla, androecium and gynoecium. They are made up of sepals, petals, stamens and carpels, respectively.

Question 2.
Embryo sac is to ovule as________ is to an anther.
(a) stamen
(b) filament
(c) pollen grain
(d) androecium
Answer:
(c) : A typical carpel consist of ovary which can have many ovules. Each ovule has an embryo sac, which in turn has a single egg cell. Similarly, in majority of angiosperms each stamen consists of a bilobed anther, which in turn has two pollen sacs in each lobe, consisting of pollen grains.

Question 7.
From among the sets of terms given below, identify those that are associated with the gynoecium.
(a) Stigma, ovule, embryo sac, placenta
(b) Thalamus, pistil, style, ovule
(c) Ovule, ovary, embryo sac, tapetum
(d) Ovule, stamen, ovary, embryo sac
Answer:
(a) : Stigma,is a part of pistil on which pollen grain lands. Each ovary may have many ovules, which have embryo sacs in them. Placenta is a tissue inside ovary to which ovules are attached. Thalamus is the terminal part of the axis of flower which bears all floral appendages. Tapetum is the innermost layer of microsporangium while stamen is component of androecium.

Question 9.
From the statements given below choose the option that are true for a typical female gametophyte of a flowering plant.
(1) It is 8-nudeate and 7-celled at maturity.
(2) It is free-nuclear during the development.
(3) It is situated inside the integument but outside the nucellus.
(4) It has an egg apparatus situated at the chalazal end.
(a) (i) and (iv)
(b) (ii) and (iii)
(c) (i) and (ii)
(d) (ii) and (iv)
Answer:
(c) : Female gametophyte or embryo ‘* sac is present in the nucellus of an ovule. It is formed by free nuclear mitotic divisions of megaspore which forms 8 nucleate structure (4 nuclei each at micropylar and chalazal end). One nucleus from each side moves to the middle to form polar nuclei which later on fuse to form secondary nucleus. The remaining three nuclei at each end get surrounded by wall to form cells. Hence, female gametophyte is 8-nucleate and 7-celled at maturity because of presence of secondary nucleus. Egg apparatus is situated at the micropylar end whereas 3 antipodal s are situated at chalazal end.

Question 10.
Autogamy can occur in a chasmogamous flower if
(a) pollen matures before maturity of ovule
(b) ovules mature before maturity of pollen
(c) both pollen and ovules mature simultaneously
(d) both anther and stigma are of equal lengths.
Answer:
(c) : Autogamy is pollination within a flower, chasmogamous flowers are those in which anthers and stigma are exposed. For autogamy, in such a flower to take place, pollen and ovule should mature simultaneously and anther and stigma should lie close to each other.

Question 12.
A particular species of plant produces light, non-sticky pollen in large numbers and its stigmas are long and feathery. These modifications facilitate pollination by
(a) insects
(b) water
(c) wind
(d) animals
Answer:
(c) : Light, non-sticky pollens produced in large numbers are generally traits of wind pollinated (anemophilous) plants. Insect and animal pollinated plants have sticky pollens. Long and feathery stigma is also characteristic of anemophilous plants. Maize, Cannabis and many grasses are some of the examples of this category.

Question 14.
In a fertilised embryo sac, the haploid, diploid and triploid structures are
(a) synergid, zygote and primary endosperm nucleus
(b) synergid, antipodal and polar nuclei
(c) antipodal, synergid and primary endo­sperm nucleus
(d) synergid, polar nuclei and zygote.
Answer:
(a) : Double fertilisation is the fusion of two male gametes brought by a pollen tube with two different cells of the same female gametophyte in order to produce two different structures. It is found only in angiosperms where it was first discovered by Nawaschin in 1898 in Fritillaria and Lilium. Out of the two male gametes one fuses with egg or oosphere to perform generative fertilisation. Generative fertilisation is also called syngamy or true fertilisation. It gives rise to a diploid zygote or oospore. The second male gamete fuses with two haploid polar nuclei or diploid secondary nucleus of the central cell to form a triploid primary endosperm nucleus (PEN). This is called as vegetative fertilisation (or triple fusion).

Question 17.
In the embryos of a typical dicot and a grass, true homologous structures are
(a) coleorhiza and coleoptile
(b) coleoptile and scutellum
(c) cotyledons and scutellum
(d) hypocotyl and radicle.
Answer:
(c) : During the development of dicot embryo, initially the dicot embryo is globular and undifferentiated. Early embryo with radial symmetry is called proembryo. It is transformed into embryo with the development of radicle, plumule and cotyledons. Two cotyledons differentiate from the sides with a faint plumule in the centre. At this time the embryo becomes heart-shaped. Part of embryo axis between the plumule and cotyledonary node is epicotyl (above the level of cotyledons) while the part between radicle and cotyledonary node is called hypocotyl (below the level of cotyledons). The single cotyledon of monocotyledonous seed (e.g. maize grain) is called scutellum. It occupies the major portion of the embryo regions of grain.

Question 19.
In a flower, if the megaspore mother cell forms megaspores without undergoing meiosis and if one of the megaspores develops into an embryo sac, its nuclei would be
(a) haploid
(b) diploid
(c) a few haploid and a few diploid
(d) with varying ploidy.
Answer:
(b)

Question 20.
The phenomenon wherein, the ovary develops into a fruit without fertilisation is called
(a) parthenocarpy
(b) apomixis
(c) asexual reproduction
(d) sexual reproduction.
Answer:
(a) : Fertilised ovary is technically called fruit. But if ovary develops into fruit, without fertilisation, it is called parthenocarpic fruit. Such fruits are generally seedless. Some common examples found in nature are : Citrus, banana, etc. Parthenocarpy can also be artificially induced by the application of certain plant hormones, specially, auxin and gibberellins.

Question 1.
Name the component cells of the ‘egg apparatus’ in an embryo sac.
Answer:
Egg apparatus consists of two synergids and one egg cell.

Question 5.
Indicate the stages where meiosis and mitosis occur (1, 2 or 3) in the flow chart.
Megaspore mother cell ——-1—— > Megaspores –2— > Embryo sac —-3—- > Egg
Answer:
1 = Meiosis 2 = Mitosis 3 = Mitosis
In the diagram given below, show the path of a pollen tube from the pollen on the stigma into the embryo sac. Name the components of egg apparatus

Question 6.
In the diagram given below, show the path of a pollen tube from the pollen on the stigma into the embryo sac. Name the components of egg apparatus. 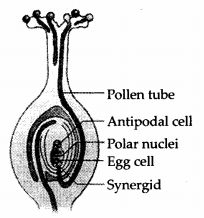 Egg apparatus consists of two synergids and one egg cell.

Question 7.
Name the parts of pistil which develop into fruit and seeds.
Answer:
Fruit develops from ovary and seeds develop from ovules of a pistil. 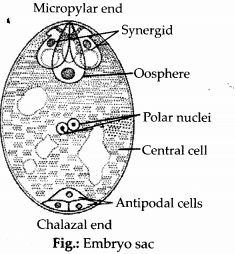 Question 16.
Identify the type of carpel with the help of diagrams given below:
Answer: 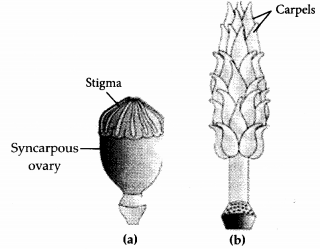 Question 2.
Given below are the events that are observed in an artificial hybridisation programme. Arrange them in the correct sequential order in which they are followed in the hybridisation programme.
(a) Re-bagging
(b) Selection of parents
(c) Bagging
(d) Dusting the pollen on stigma
(e) Emasculation
(f) Collection of pollen from male parent.
Answer:
(b) —> (e) —> (c) —> (f) —> (d) —> (a)

Question 3.
Vivipary automatically limits the number of offsprings in a litter. How?
Answer:
Viviparity is a form of reproduction in animals in which the development of embryos takes place within the mother’s/ female parent’s body. The embryo obtains its nourishment directly from mother via placenta or by other means and subsequently mother gives birth to the full term young one. It is common in most mammals. Viviparity limits the number of offspring in a litter due to the following reasons:

Question 4.
Does self incompatibility impose any restrictions on autogamy? Give reasons and suggest the method of pollination in such plants.
Answer:
Self incompatibility is the phenomenon in which self pollens fail to germinate on stigma of pistil. It is a gene physiological process which is controlled by single gene S. If pollen and pistil will have the S alleles in common, pollens will not be functional on that pistil. As self pollens will have common S alleles with pistil (of the same flower), self pollination (autogamy) cannot take place in self incompatible plants. Cross pollens on the other hand, will not have common S alleles with pistil and hence, cross pollination can easily take place in such plants.

Question 5.
In the given diagram, write the names of parts shown with lines. 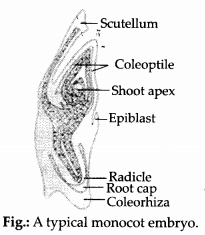 Question 6.
What is polyembryony and how can it be commercially exploited?
Answer:
The phenomenon of having more than one embryo is called polyembryony, e.g., onion, groundnut. 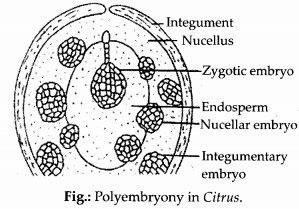 Question 7.
Are parthenocarpy and apomixis different phenomena? Discuss their benefits.
Answer:
Parthenocarpy is production and development of seedless fruits. Apomixis is a type of sexual reproduction which does not involve meiosis and syngamy and produces seeds without fertilisation.
Benefits of parthenocarpy are as follows:
(1) It produces fruits which do not contain irritant seeds.
(2) Processing of fruits by food industry requires the removal of seeds which is quite difficult. Therefore, seedless fruits are preferred by food industry.
(3) Fruits can be developed inside green houses where pollinators are not available.
Benefits of apomixis are as follows:

Question 8.
Why does the zygote begin to divide only after the division of primary endosperm cell (PEC)?
Answer:
Endosperm development precedes embryo development. The primary endo¬sperm cell divides repeatedly and forms the triploid endosperm tissue. The cells of this tissue are filled with reserve food materials and are used for the nutrition of the developing embryo at the micropylar end of the embryo sac. This is an adaptation to provide assured nutrition to the developing embryo.

Question 10.
In the ,figure given below, label the following parts: .
Male gametes, egg cell, polar nuclei, synergid and pollen tube. 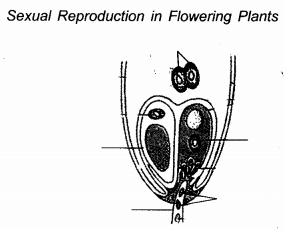 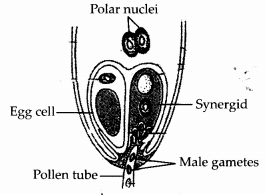 Question 1.
Starting with the zygote, draw the diagrams of the different stages of embryo development in a dicot.
Answer: 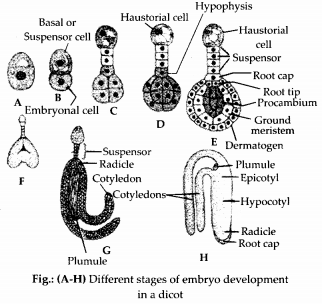 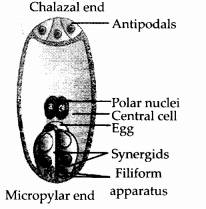 Ovule is an integumented megasporangium that encloses an embryo sac. Common type of ovule is anatropous. Parts of mature angiospermic ovule are:
(1) Funicle : It is the stalk of the ovule. It is attached to placenta by funicle. In anatropous ovules the funicle is fused with the body of the ovule lengthwise to form raphe. Place of union of funicle and the body of ovule is called hilum.

(2) Integuments : They are one or two cuticularised coverings of the ovule. The  place of origin of integuments is called chalaza. A pore’occurring on one side of ovule where integuments are absent is known as micropyle.

(3)  Nucellus : It is parenchymatous tissue  contained in the ovule.

(4) Embryo sac : It is female gametophyte which is covered by a thin membrane. Embryo sac has seven cells. Three cells form egg apparatus towards micropylar end. There are two synergids and one egg or oosphere in the egg apparatus. Three cells on the opposite side are called antipodal cells. The seventh cell of the embryo sac is the largest cell called central cell. Central cell has two polar nuclei which may fuse to form a diploid secondary nucleus. Synergids are short­lived (one of them degenerates long before fertilisation and second after entry of pollen tube into embryo sac).
These synergids help :

materials from the nucellus to the embryo sac. Hook like structures help in easy penetration of pollen tube and liberation of male gamete from the pollen tube.

Question 4.
Draw the diagram of a microsporangium and label its wall layers. Write briefly on the role of the endothecium.
Answer: 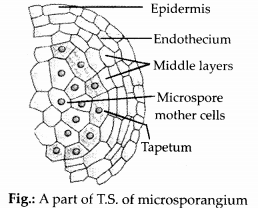