Question 1.
A few statements describing certain features of reproduction are given below.
(i) Gametic fusion takes place.
(ii) Transfer of genetic material takes place.
(iii) Reduction division takes place.
(iv) Progeny have some resemblance with parents.
Select the options that are true for both asexual and sexual reproduction from the options given below.
(a) (i) and (ii)
(b) (ii) and (iii)
(c) (ii) and (iv)
(d) (i) and (iii)
Answer:
(c) : Reproduction is a biological process in which-an organism produces young ones (offspring) similar to itself. In reproduction, offsprings have some resemblance with parents. Both sexual and asexual reproduction involve transfer of genetic material.

Question 2.
The term ‘clone’ cannot be applied to offspring formed by sexual reproduction because
(a) offspring do not possess exact copies of parental DNA
(b) DNA of only one parent is copied and passed on to the offspring
(c) offspring are formed at different times
(d) DNA of parent and offspring are completely different.
Answer:
(a) : In sexual reproduction, there is fusion of male gametes and female gametes, the offspring produced are not identical to their parents. This genetic recombination leads to variations, which play an important role in evolution.

Question 8.
The statements given below describe certain features that are observed in the pistil of flowers.
(i) Pistil may have many carpels.
(ii) Each carpel may have more than one ovule.
(iii) Each carpel has only one ovule.
(iv) Pistil have only one carpel.
Choose the statements that are true from the options below.
(a) (i) and (ii)
(b) (i) and (iii)
(c) (ii) and (iv)
(d) (iii) and (iv)
Answer:
(a) : Gynoecium is the female part of the flower, a unit of which is called pistil. A pistil may have one or more than one carpels (monocarpellary, bicarpellary etc). Each carpel may have more than one ovules.

Question 10.
Appearance of vegetative propagules from the nodes of plants such as sugarcane and ginger is mainly because
(a) godes are shorter than internodes
(b) nodes have meristematic cells
(c) nodes are located near the soil
(d) nodes have non-photosynthetic cells.
Answer:
(b) : Vegetative propagation is asexual reproduction from ‘various parts in plants. In plants, such as, sugarcane and ginger, appearance of vegetative propagules from nodes is because of presence of meristematic cells in them. Meristematic cells have the ability to divide to form new cells which can differentiate and give rise to permanent tissues.

Question 3.
Although potato tuber is an underground part, it is considered as a stem. Give two reasons.
Answer:
Reasons for considering potato as a stem are:

Question 5.
Rearrange the following events of sexual reproduction in the sequence in which they occur in a flowering plant : embryogenesis, fertilisation, gametogenesis, pollination.
Answer:
The correct sequence of events of sexual reproduction in flowering plants are as follows : gametogenesis, pollination, fertilisation, embryogenesis.

Question 8.
Is there a relationship between the size of an organism and its life span? Give two examples in support of your answer.
Answer:
There is no direct correlation between the life span of organisms and their sizes.

Question 9.
In the figure given below the plant bears two different types of flowers marked ‘A’ and ‘B’. Identify the types of flowers and state the type of pollination that will occur in them. 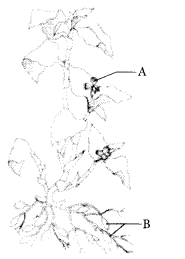 Question 11.
In the figure given below, mark the ovule and pericarp.

Question 1.
In haploid organisms that undergo sexual reproduction, name the stage in the life cycle when meiosis Give reasons for your answer.
Answer:
In zygospore (formed by zygote) meiosis occurs. Because after meiosis it can form meiospores which can develop into haloid organisms.

Question 2.
The number of taxa exhibiting asexual reproduction is drastically reduced in higher plants (angiosperms) and higher animals (vertebrates) as compared with lower groups of plants and animals. Analyse the possible reasons for this situation.
Answer:
Both angiosperms and vertebrates have more complex structural organisation. They have evolved very efficient mechanism of sexual reproduction.

Question 3.
Honeybees produce their young ones only by sexual reproduction. Inspite of this, in a colony of bees we find both haploid and diploid  individuals Name the haploid and diploid individuals in the colony and analyse the reasons behind their formation.
Answer:
Honeybees produce their young ones by sexual reproduction but parthenogenesis also occurs alongwith sexual reproduction. Fertilised eggs and parthenogenetically developed eggs give rise to different castes. In honey bees, fertilised eggs (zygotes) which is diploid give rise to queens and workers (both are females) and unfertilised eggs (ova) which is haploid develop into drones (males).

Initially all the cells of the developing embryo are alike with same genetic information. Later however, due to the phenomenon of differentiation depending on their location and internal cellular mechanism, different cells of the embryo develop differently forming embryonal axis, plumule and radicle. However, if cell differentiation does not occur the embryo will remain just a mass of undifferentiated cells or callus. There would not any plumule, radicle, cotyledons or embryo axis. A new plant will not be formed from such an embryo.

Question 8.
List the changes observed in an angiosperm flower subsequent to pollination and fertilisation.
Answer:
In an angiosperm flower, the changes that occur subsequent to pollination and fertilisation are called post-fertilisation changes. Pollen grain germinates over the stigma and forms a pollen tube carrying two gametes. Pollen tube reaches ovary and enters an ovule through one of its synergids. Fertilisation produces a diploid zygote and triploid primary endosperm cell. Zygote produces embryo and primary endosperm cell forms endosperm. Transformation takes place and ovule transforms into seed, ovary transforms into fruit and ovary wall into pericarp. The petals, stamens and style wither away.

Question 9.
Suggest a possible explanation why the seeds in a pea pod are arranged in a row, whereas those in tomato are scattered in the juicy pulp.
Answer:
Arrangement of seeds inside a fruit depends upon the type of placentation and the growth of placental axis. In pea ovary, the ovules are attached to the ventral suture i.e., marginal placentation and carpel is mono- carpellary. So, seeds are arranged in a row. In tomatoes, the gynoecium is tricarpellary with axile placentation. The placentae grow and become pulpy during fruit formation. As a result seeds get scattered in the pulpy mass in tomato.

Question 10.
Draw the sketches of a zoospore and a conidium. Mention two dissimilarties between them and atleast one feature common to both structures.
Answer:

Dissimilarities : Zoospores are motile and flagellated whereas conidia are nonmotile. Zoospore are formed inside a zoosporangium and conidia are formed (exogenously) outside on a conidiophore.
Similarity : Both are reproductive structures for asexual reproduction.

(1) Binary fission : In this type of asexual reproduction, the parent organism divides into two halves, each half forms an independent daughter organism e.g.,

(3) Bidding : In budding, a daughter individual is formed from a small part or bud, arising from the parent body g., yeast.
Spore formation or sporulation : Spores are minute, single celled, thin or thick walled propagules. In this type of asexual reproduction dispersive structures called spores are released from parent body that germinate under favourable conditions to form new individuals. Motile spores called zoospores are formed in unicellular alga like

Question 2.
Do all the gametes formed from a parent organism have the same genetic composition (identical DNA copies of the parental genome)? Analyse the situation with the background of gametogenesis and provide or give suitable explanation.
Answer:
No, All the gametes formed from a parent organism don’t have the same genetic combination. Formation of two types of gametes-male and female, inside the gametangia, is called gametogenesis. The reproductive units in sexual reproduction are specialised cells called gametes. The gametes are generally of two kinds : male and female. The gametes of all the organisms are usually haploid cells, i.e., possess single set (or n number) of chromosomes. The gametes are usually formed by meiotic divisions. Therefore, they are haploid, i.e., have halved or reduced (n) number of chromosomes. During this processes, random segregation of chromosomes (independent assortment) and exchange of genetic material between homologous chromosomes (crossing over) result in new combinations of genes in the gametes, and this reshuffling increases genetic diversity. The coming together of two unique sets of chromosomes in the zygote forms the genetic basis of variation within the species.

Question 4.
Differentiate between
(a) oestrous and menstrual cycles;
(b) ovipary and vivipary. Cite an example for each type.
Answer:
(a) Differences between menstrual and oestrous cycles are as follows:

(b) Differences between ovipary and vivipary are as follows:

Question 5.
Rose plants produce large, attractive bisexual flowers but they seldom produce fruits. On the other hand a tomato plant produces plenty of fruits though they have small flowers. Analyse the reasons for failure of fruit formation in rose.
Answer:
Both rose and tomato plants are selected by human beings for different characteristics, the rose for its flower and tomato for its fruit. Rose plant is vegetatively propagated and does not produce seeds. Fruit formation fails in rose plant due to following reasons: