Question 1.
How is a sex of new born determined in humans ?
Answer:
Natural selection is preferential survival and differential reproduction of individuals of a population which possess variations that provide better adaptability to the existing environment. Peppered Moth of England has two forms, light grey and dark grey. Prior to industrial revolution, tree trunks in the forests around.
Manchester were light greyish green due to presence of lichens. Most of the Peppered Moth found in the area were light coloured with dark spots which could not be spotted easily by predator birds. During 1845 to 1890, air pollution killed the lichen flora. The deposition of soot changed the colour of the tree trunks to blackish one. Peppered Moth of the area also exhibited switch over to melanic or blackish form.
It provided better survival value against dark background. The light grey form largely disappeared as it could be easily spotted by predator birds and devoured.

Question 3.
Mention three important features of fossils which help in the study of evolution.
Answer:
Fossils are remains or impressions of past organisms that are found in the rocks. Fossils of lower strata belong to early periods while those of upper strata are of later periods. Arranging the fossils stratumwise will indicate the occurrence of different forms of life at different times. It is found that the early fossils generally belong to simple organisms. Complexity and elaboration increased gradually with evolution. Evolution has never been linear or straight. A number of variants or branches appeared, some of which were more complex while others were less complex.

Question 4.
Why do all the gametes formed in human females have an X-chromosome ?
Answer:
Human females are homogametic. Their generic constitution is 44 + XX The two sex chromosomes are similar. Their ova which are produced after meiosis carry a gametic constitution of 22 + X No other combination is possible.

Question 8.
Does the occurrence of diversity of animals on earth suggest their diverse ancestry also ? Discuss this point in the light of evolution.
Answer:
Diversity of animals does not mean that they have diverse ancestry. Animals can be grouped into distinct lineages (e.g., mammals, birds, reptiles, annelids). Many of the lineages further show some similarities in basic traits indicating a common ancestry, e.g.,
vertebrates. Therefore, animals having a common ancestor in the remote past have successively developed newer and newer traits forming various groups of animals.

Question 9.
Give the pair of contrasting traits of the following characters in Pea plant and mention which is dominant and recessive

Question 10.
Why did Mendel choose Pea plant for his experiments ?
Answer:
Mendel chose Garden Pea or Edible Pea (Pisum sativum) as his experimental material because of

Question 11.
A woman has only daughters. Analyse the situation genetically and provide a suitable, explanation.
Answer:
A woman produces only one type of ova (22 + X) while her husband produces two types of sperms, gynosperms (22 + X) and androsperms (22 + Y) in equal proportion. It is a chance that each time the woman conceived, only the gynosperm fertilised the egg so that only daughters were born.

Question 12.
Does geographical isolation of individuals of a species lead to formation of a new species ? Provide a suitable explanation.
Answer:
Yes. Geographical isolation of a population will lead to genetic drift as there will be no gene flow between it and the parent species. Inbreeding in small population will result in fixation of certain alleles and elimination of others. There will be change in gene frequency. Mutations will produce new alleles and hence a new gene pool. Accumulation of new alleles and hence new variations over several generations will ultimately lead to the formation of new species.

Question 13.
Bacteria have a simpler body plan when compared with human beings. Does it mean that human beings are more evolved than bacteria. Provide a suitable explanation.
Answer:
Both bacteria and human beings perform all the activities of life and live comfortably in their environments. They, therefore, seem
to be equally evolved. However, human beings have a far more complex organisation and differentiation which are absent in bacteria. Since complex organisation and differentiation develop only through evolution, humans are far more evolved than bacteria.

Question 15.
Differentiate between inherited and acquired characters. Give one example of each type.
Answer:

Question 16.
Give reasons why acquired characters are not inherited.
Answer:
Many of the variations have no immediate benefit to the species. They function as preadaptations which can be beneficial under certain environmental conditions like heat tolerance variation if the temperature of the area rises.

Question 17.
Evolution has exhibited greater stability of molecular structures when compared with morphological structures. Comment on the statement and justify your opinion.
Answer:
Life is a highly organised system of biochemicals and their reactions. It is expressed inside the cells. They are the same right from bacteria to human beings. However, the method of procurement of the raw materials for forming bio-chemicals is not the same in various organisms. It has helped in avoiding cut throat competition amongst the living beings. They developed different morphological features and modes of obtaining nutrients. As a result a huge diversity has appeared in the living world.

Question 18.
In the following crosses, write the characteristics of the progency 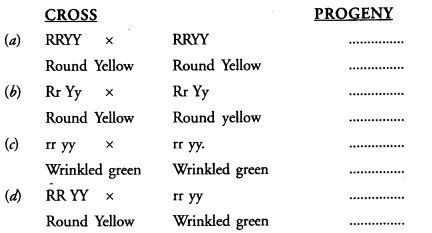 Question 19.
Study the following cross showing self pollination in F1. Fill in the blank and answer the question that follows :

Question 21.
Give the basic features of the mechanism of inheritance.
Answer:
Basic Features of Inheritance

Hope given NCERT Exemplar Solutions for Class 10 Science Chapter 9 Heredity and Evolution are helpful to complete your science homework.