Question 3.
Label the endocrine glands in the figure 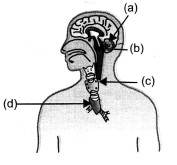 Question 5.
Label the parts of a neuron shown in the figure. 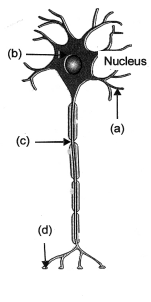 Question 6.
Match the terms of column A with those of column B.

Question 7.
What is a tropic movement ? Explain with an example. (CCE 2011)
Answer:
Tropic Movement: It is directional paratonie growth movement of curvature in which direction of movement is determined by the direction of the stimulus. They mostly occur in cylindrical organs. Growth response occurs due to differences in the distribution of auxin.
Example. On unidirectional exposure to light, shoots bend towards the source of light (positive phototropism) while roots may bend away from the source of light (negative phototropism).

Question 8.
What will happen if intake of iodine in our diet is low ?
Answer:

Question 9.
What happens at the synapse between the neurons ?

State the events in sequence that take place when an electrical impulse travels from a dendritic tip of a nerve cell to another nerve cell. (CCE 2011, 2012, 2013)
Answer:
At synapse, axon terminal is expanded to form presynaptic knob. The dendrite terminal that lies close to it is slightly broadened and depreseed to form post-synaptic depression. A fluid filled narrow space, called synaptic cleft, occurs between the two. When an impulse reaches the presynaptic knob, it stimulates the release of neurotransmitter into synaptic cleft. Neurotransmitter comes in contact with chemoreceptor sites of the membrane of postsynaptic depression. This generates an electrochemical signal or impulse in the dendrite part of second neuron.

Question 12.
Draw the structure of a neuron and explain its function. (CCE 2011)
Answer:

Question 15.
Mention one function for each of these hormones.
(a) Thyroxine
(b) Insulin
(c) Adrenaline
(d) Growth hormone
(e) Testosterone. (CCE 2010, 2013, 2015)
Answer:
(a) Thyroxine: Regulates metabolism of carbohydrates, fats and proteins, release of energy and body activity.
(b) Insulin: Regulates blood glucose by its absorption in liver, muscles (for formation of glycogen) and individual cells (for metabolic activity).
(c) Adrenaline: For meeting an emergency by increasing heart rate and supply of blood to various concerned organs.
(d) Growth Hormone (GH) or Somatotrophic Hormone: Regulates growth and development of the body through anabolic activity for growth of bones, muscles and visceral organs.
(e) Testosterone (Male Sex Hormone): Controls changes in body associated with puberty in males (beard, moustache, low pitch voice, increased growth of bones and muscles).

Question 17.
What are reflex actions ? Give two examples. Explain a reflex arc.
Answer:
Definition: Reflex actions seem to have evolved quite early in the physiology of animals when complex neuron network for processing had not been evolved. Even after evolution of processing centres, reflex actions have continued to persist because of their more efficiency for quick responses.
Two Examples:

Question 18.
“Nervous and hormonal systems together perform the function of control and coordination in human being.” Justify the statement.
Answer:
Both nervous system and hormonal (or endocrine) system are involved in control, regulation and coordination of body parts. Nervous system is connected to receptors of all senses. Information obtained from sensory organs is passed rapidly to CNS for interpretation.
On the basis of interpretation, a message is sent to effector organ or organs (muscles, glands, etc.). The rate of information or impulse transfer is very high, some 100m/sec. Every action and activity is well coordinated as the information is sent to all the regions required for that action. The action can be voluntary (under the will) or involuntary. Passage of food in the alimentary canal is due to an involuntary movement of alimentary canal called peristalsis. Picking up food and placing it inside the mouth is a voluntary movement. Both these movements are highly coordinated by nervous system.
Nervous system is also connected with the functioning of endocrine or hormonal system. The endocrine system functions at the biochemical level while nervous system functions at the physical and physiological level. For their functioning endocrine glands pour their secretion into blood which transports them to all parts of the body. Target cells have receptors for picking up the hormones and working as per hormonal stimulus. There is a feedback system which determines the requirement of hormones and the activity of endocrine glands. Other stimuli are also involved for coordinated functioning. Presence of food in the stomach stimulates its wall to secrete hormone gastrin. Gastrin stimulates gastric glands to pour gastric juice over the food. As the partially digested food passes into duodenum, the latter forms hormone secretin which induces passage of bile and pancreatic juice into duodenum.
Joint working of both the systems is observed during an emergency. Both sympathetic nervous system and adrenal glands prepare the body for meeting the emergency. There is higher rate of heart beat, more blood supply to cardiac and skeletal muscles and higher rate of breathing for quicker oxygenation of blood.

Question 19.
How does chemical co-ordination take place in animals ?
Answer:
In animals, chemical coordination is achieved through the agency of hormones which function as chemical messengers or informational molecules. Hormones are secreted by ductless glands in response to specific conditions or nervous stimulation. Timing and amount of a hormone released are regulated by feed-back mechanism. After a meal, sugar level of blood rises. It is detected by pancreas. Pancreas responds by producing hormone insulin from (3-cells of islets of Langerhans. Insulin causes glucose to be absorbed by all cells as well as get stored in liver and muscles in the form of glycogen. As the level of glucose falls in blood, insulin secretion is reduced.

Question 20.
Why the flow of signals in a synapse is from axonal end of one neuron to dendrite end of another neuron but not the reverse ?
Answer:
As the electrical impulse reaches the axon terminal in the region of axon-dendrite synapse, it stimulates the exocytosis of vesicles containing neurotransmitter (e.g. acetylcholine). Neurotransmitter attaches to the chemoreceptor sites of the membrane covering the dendrite end of synapse. It creates a new impulse that travels through cell body and axon of the second neuron. At synapse, the axon end does not contain any chemoreceptor sites so that reverse flow of electrochemical impulses is not possible.

Hope given NCERT Exemplar Solutions for Class 10 Science Chapter 7 Control and Coordination are helpful to complete your science homework.