You can also practice NCERT Solutions for Class 8 History Chapter 2 Questions and Answers on LearnInsta.com.

Question 6.
Where was the Ist factory of British East India Company established and in which year?
Answer:
Ist English factory was established on the banks of river Hugli in the year 1651.

Question 7.
What is Factory according to the colonial time period in India?
Answer:
Factory was a place from where the factors were operated and it had a warehouse where goods for export were stored.

Question 8.
What was the Farman issued by Aurangzeb to the Company?
Answer:
Farman granted Right to trade duty-free to the Company.

Question 17.
Who was established as Nawab in replacement of Mir Jafar?
Answer:
Mir Qasim was installed as the Nawab in place of Mir Jafar.

Question 1.
Mention the aftermath of the death of Aurangzeb in 1707?
Answer:
Aurangzeb died in 1707 which resulted in:

Question 3.
What were the things which India had for the purpose of trade?
Answer:
India had several things from which trade of the East India Company got wide and the rate of their profit got maximised. Those things were pepper, cloves, cardamom and cinnamon.

Question 6.
How did the new policy of paramountcy get challenged in Kitoor?
Answer:
When the British tried to annex the small state of Kitoor (in Karnataka today) Rani Channamma took arms in her hands and led an anti-British resistance movement. But after she died in prison, Rayanna a poor chowkidar of Sangoli in Kitoor carried on challenging the policy of the British.

Question 1.
Name the policy devised by Lord Dalhousie for annexation purpose and explain how it worked and also name states annexed under this policy.
Answer:
Lord Dalhousie was the Governor-General from 1848 – 1856 and he was reason behind the final wave of annexations. He devised a policy that came to be known as Doctrine of Lapse. The policy declared that if an Indian ruler died without any male heir, his kingdom would lapse and that will become part of the Company territory.

Question 2.
How did the Mysore grow in strength under the leadership of its powerful rulers Haidar Ali and Tipu Sultan?
Answer:
Mysore had grown in strength under the kingship of the powerful rulers Haidar Ali (1761 – 1782) and his son Tipu Sultan (1782 – 1799). Tipu was also called ‘The Tiger of Mysore’. Mysore controlled the powerful trade of Malabar coast from where the Company purchased pepper and cardamoms.

Tipu stopped the export of sandalwood, pepper and cardamom through ports of his kingdom and disallowed the local merchants from trading with the Company. He also established a close relationship with the French in India and modernised his army with their help. This is how Mysore got strengthen under the kingship of Haidar Ali and Tipu Sultan.

Question 3.
Explain the policy of Paramountcy, also explain the struggle of Kitoor in challenging this aggressive policy.
Answer:
The Company adopted an aggressive policy of territorial expansion. Under Hastings (1813 – 1823)
Governor Generalship, a new policy of paramountcy was initiated with which the Company claimed that its authority was paramount and supreme so the power of the Company was greater than that of Indian states. So in order to protect the Company’s interest it was justified annexing or threatening of annexation to the Indian states. This policy and its aim continued to guide the later British policies as well.

The struggle of Kitoor challenging this policy was really commendable. When the British tried to annex the small state of Kitoor in Karnataka, Rani Channamma took to arms and led an anti-British resistence movement. She got arrested in 1824 and died in prison in 1829. After her Rayanna, a poor chowkidar of Sangoli in Kitoor carried on resistence. With popular support many British camps and records were destroyed by him. He was later caught and hanged by the British in 1830. This is the struggle of Kitoor.

Question 1.
Describe briefly about the picture given above.
Answer:
The picture does represents ‘toy tiger’ of Tipu Sultan the great warriors. The picture is kept in the Victoria and Albert museum in London. The Britishers had took it away. When Tipu Sultan died while defending his capital Sheringpatnam on 4th May 1798. 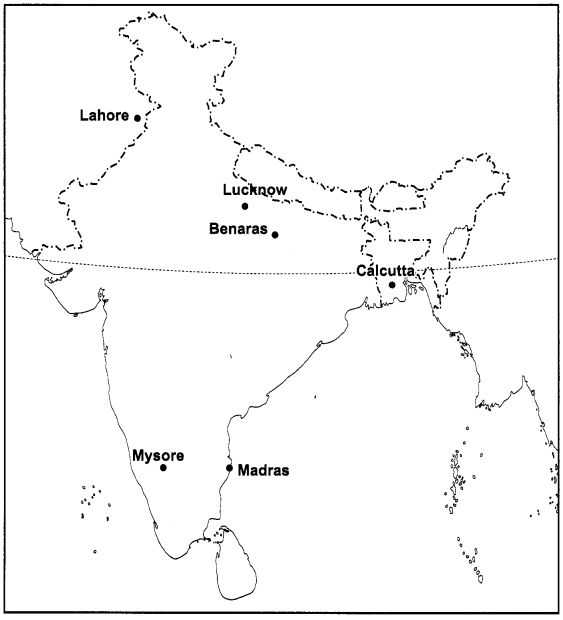