You can also practice NCERT Solutions for Class 8 History Chapter 6 Questions and Answers on LearnInsta.com.

Question 2.
Define urbanisation?
Answer:
Urbanisation means a process by which more and more people begin to reside in towns and cities.

Question 5.
What is meant by cul – de – sacs?
Answer:
It means street with a dead end.

Question 7.
When was the Delhi College shut down?
Answer:
It was turned into a school and shut down in 1877.

Question 8.
Name the two architects called on to design New Delhi and its building.
Answer:
Two architects were Edward Lutyens and Herbert Baker.

Question 9.
How many years did New Delhi take to build?
Answer:
New Delhi took nearly 20 years to be built.

Question 10.
What did the census of 1931 reveal about New Delhi?
Answer:
It revealed that New Delhi had only about 3 persons per acre.

Question 11.
Name the most splendid capital built by Shahjahan in 1639.
Answer:
Shahjahanabad.

Question 13.
In which years, Delhi became the capital of British India?
Answer:
In 1911.

Question 15.
In which year western wall of Shahjahanabad was broken to allow the expansion of the city?
Answer:
In 1870.

Question 16.
Who organised Delhi Darbar to acknowledge Queen Victoria as the empress of India?
Answer:
Lord Lytton in 1877 has organised it.

Question 17.
In how many years New Delhi was built.
Answer:
It took nearly 20 years.

Question 18.
Name the new colonies made in Delhi at the time of partition?
Answer:
Lajpat Nagar and Tilak Nagar.

Question 1.
When and how was the Delhi Improvement Trust set up?
Answer:
The Delhi Improvement trust was set up in 1936, and it built areas like Daryaganj South for wealthy Indians. Houses were grouped around parks. Within the houses, space was divided according to new rules of privacy. Instead of spaces being shared by many families or groups, now different members of the same family had their own private spaces within the home.

Question 6.
What was condition of Delhi after the cruel partition?
Answer:
After the partition took place riots began when over 2/3rd Muslims migrated from Delhi and almost 44000 homes were abandoned on the other hand. Delhi became a city of refugees with nearly 500,000 people added to the population of Delhi. New colonies such as Lajpat Nagar and Tilak Nagar came up at this time.

Mosques, in particular, were either destroyed or put to other uses. The Zinat-al-Masjid was converted into a bakery. No worship was allowed in the Jama Masjid for 5 years. One-third of the city was demolished and its canals were filled up.

In 1870’s the western wall of Shahjahanabad were broken to establish the railway and to allow the city to expand beyond the walls. The British started living in sprawling Civil- Lines area that came up in the north, away from the Indians in the walled city. The Delhi College was turned into a school, and shut down in 1877.

Old trading centres and ports could not survive when the trade moved to new centres. Similarly, earlier centres of regional power collapsed where local rulers were defeated by the British and new centres of administration emerged. This process is often described as de-urbanisation this is how the Presidency cities rose in importance. 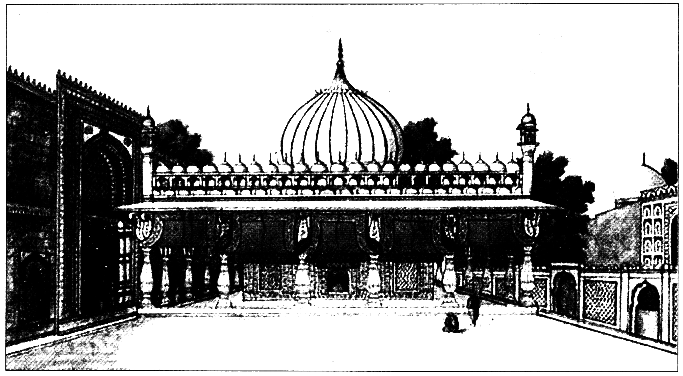 Question
1. Name the shrine shown in the picture.
2. Where the above-shown shrine located in India.
Answer:
1. The picture is Dargah of Hazrat Nizamuddin Auliya.
2. It is in Delhi.