You can also practice NCERT Solutions for Class 8 Civics Chapter 8 Questions and Answers on LearnInsta.com.

Question 1.
Define the term linguist.
Answer:
Linguist is someone who knows and studies several languages.

Question 2.
What was main aim behind establishing Hindu College in Benaras in 1791?
Answer:
Hindu College was established to encourage the study of ancient Sanskrit texts that would be useful for the administration of the country.

Question 3.
What is meant by an Orientalist?
Answer:
Orientalists were those who were having scholarly knowledge of the language and culture of Asia.

Question 4.
How did Thomas Babington Macaulay see India?
Answer:
He saw India as an uncivilized country that needed to be civilized.

Question 9.
Who was William John.
Answer:
William Jones was appointed as Junior Judge at the supreme court of company.

Question 11.
By whom was the Asiatic society of Bengal was setup?
Answer:
By William Jones.

Question 12.
From whom did William Johns learnt Sanskrit language?
Answer:
The Pandits.

Question 13.
In which year was Madarsa setup in Calcutta?
Answer:
In 1781.

Question 14.
When was the Hindu college Benaras was established?
Answer:
In 1791.

Question 15.
Who emphasized on teaching of English language in manner of civilizing, changing the taste values and cultures of the Indians?
Answer:
Lord Macaulay.

Question 16.
When was the English Education act introduced?
Answer:
In 1835.

Question 1.
In what sense does Gandhiji and Tagore’s thoughts were similar and different about western education?
Answer:
In many senses Tagore’s and Gandhiji’s thoughts about western education were similar. There were several differences too. Gandhiji was highly critical of western education, civilization and its worship of machines and technology. But Tagore wanted to combine elements of modern western civilisation with the best within Indian tradition. Tagore emphasized on the needs to teach science and technology along with art, music and dance.

Question 4.
What consequences were there of the new rules and routine over the earlier pathshala students who accepted the British rules?
Answer:
In the earlier system of Pathshala, students from poor peasant families had been able to go to pathshalas as the timetable was flexible before adoption of rules of the British government. The discipline of the new system demanded regular attendance, even during harvest time when children of poor families had to work in the fields. Inability to attend school came to be seen as indiscipline, as evidence of the lack of desire to learn.

Question 5.
What did James Mill declare while attacking the orientalists?
Answer:
James Mill attacked the orientalists and declared that the British should not make efforts to teach what the natives wanted or respected, in order to please them. The aim of education ought to be to teach what was useful and practical. So Indians should be made familiar with the scientific and technical advancements that the west had made, rather than with the poetry and sacred literature of the orientals.

Question 1.
In view of Mahatma Gandhi why was practical knowledge very much essential for development of person’s mind and soul?
Answer:
Mahatma Gandhi believed that western education focused on reading and writing rather than lived experiences and practical knowledge. He argued that education ought to develop a person’s mind and soul. Literacy – or simply learning to read and write by itself did not count as education.

People had to work with their hands, learn a craft, and know-how different things operated. This would develop their mind and their capacity to understand. This is why Mahatma Gandhi believed that practical knowledge was very much essential for development of person’s mind and soul.

Adam found that there were over 1 lakh pathshalas in Bengal and Bihar. These were small institutions with no more than 20 students each. But the total number of children being taught in these pathshalas was considerable over 20 lakh. These institutions were set up by wealthy people, or the local community. At times they were started by a teacher (guru).

The system of education was flexible. Adam discovered that this flexible system was suited to local needs. For instance, classes were not held during harvest time when rural children often worked in the fields. The pathshala started once again when the crops had been cut and stored. This meant that even children of peasant families could study.

Question 3.
Explain Wood’s Despatch. What was mentioned in its provision?
Answer:
In 1854, the Court of Directors of the East India Company in London sent an educational despatch to the Governor-General in India, issued by Charles Wood, the president of the Board of Control of the Company. It has come to be known as Wood’s Despatch.

Question:
1. Who was Henry Thomas Cookbook? 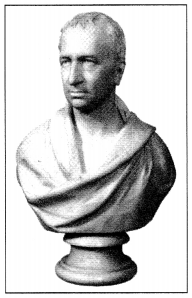 2. Whom does the monument belong to? 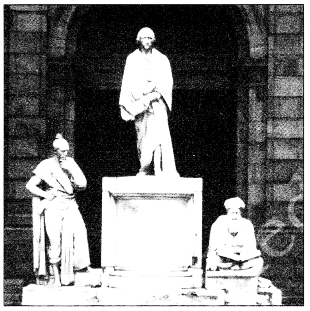 3. Along with whom is Mahatma Gandhi sitting with. 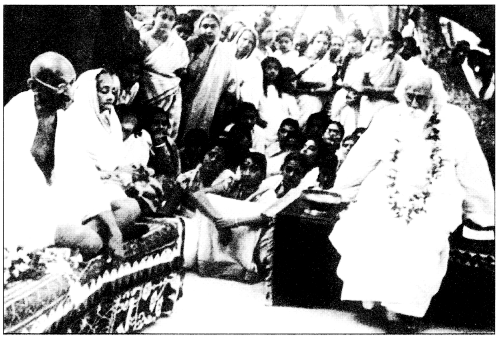 4. What does the picture show? 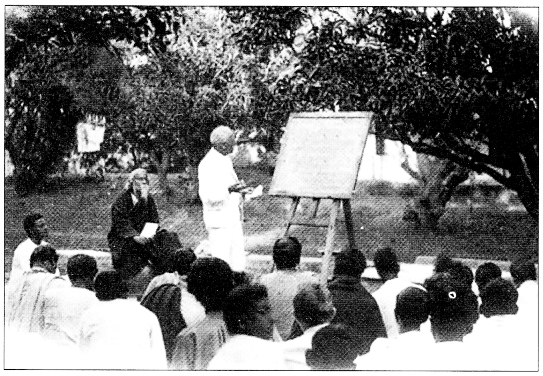