You can also practice NCERT Solutions for Class 7 History Chapter 8 Questions and Answers on LearnInsta.com.

Question 1.
How did the people worship their deity?
Answer:
People performed various kinds of bhakti and rituals of worship or singing bhajans, kirtans or qawwalis or even repeating the name of God in silence.

Question 2.
Why did the people turn towards teaching of Buddha and Jainas? ‘
Answer:
Many people turned to the teachings of the Buddha or the Jainas according to which it was possible to overcome social differences and break the cycle of rebirth through personal effort.

Question 4.
What is hagiography?
Answer:
Hagiography is the writing of saints’ lives.

Question 6.
What did Nathpanthis, Siddacharas and Yogis advocate for getting salvation?
Answer:
To achieve the salvation they advocated intense training of the mind and body through practices like yogasanas, breathing exercises and meditation.

Question 7.
What do you understand about dargah?
Answer:
Dargah is a place where the body of a Sufi saint is cremated. This became a place of pilgrimage where thousands of people of all faiths thronged.

Question 10.
What did Tulsidas conceive?
Answer:
Tulsidas conceived of God in the form of Rama. He composed Ramcharitmanas which is a world-famous epic and is important both as an expression of his devotion and as a literary work.

Question 11.
Who was Surdas?
Answer:
Surdas was an ardent devotee of Krishna. He wrote many Chhanda and Dohas which have been compiled in the form of Sursagara, Sahitya Lahari and Surasaravali etc.

Question 1.
Which was the widely accepted idea?
Answer:
The idea that all living things pass through countless cycles of birth and rebirth performing good deeds and bad came to be widely accepted. The belief that social privileges came from birth in a ‘noble’ family or a “high’ caste was the subject of many learned texts.

Question 2.
Who was Shankara and what was his thought?
Answer:
One of the most influential philosophers of India Shankara was bom in Kerala in the 8th century. He was an advocate of Advaita or the doctrine of the oneness of the individual soul and the Supreme God which is the Ultimate Reality. He taught that Brahman, the only or Ultimate Reality, was formless and without any attributes.

Question 3.
Who was Ramanuja? Describe.
Answer:
Ramanuja, bom in Tamil Nadu in the 11th century, was deeply influenced by the Alvars. Intense devotion to Vishnu was means of attaining salvation. He followed doctrine of Vishishtadvaita. His doctrine greatly inspired the new strand of bhakti which developed in north India subsequently.

Question 4.
What do you understand about Virashaiva movement?
Answer:
Virashaiva movement was initiated by Basavanna and his companions Allama Prabhu and Akkamahadevi in Karnataka in mid-12th century. They argued strongly for equality of all human beings, opposed Brahmanical ideas on caste and treatment of women. They were also against all forms of ritual and idol worship.

Question 5.
Who were Sufis? What did Sufis believe in?
Answer:
Sufis were Muslim mystics. They rejected outward religiosity and emphasized love and devotion to God and compassion towards all fellow human beings. Islam emphasizes monotheism (one God). It rejected idol worship and highlights into collective prayers. Sufis composed poems expressing their feelings and a rich literature in prose, including anecdotes and fables, developed around them.

Question 6.
Give the name of some Sufis.
Answer:
Ghazzali, Rumi and Sadi were the great Sufis in central Asia and in India there were Khwaja Muinuddin Chisti of Ajmer, Qutbuddin Bakhtiar Kaki of Delhi, Baba Farid of Punjab, Khwaja Nizamuddin Auliya of Delhi and Bandanawaz Gisudaraz of Gulbarga.

The Nayanars and Alvars went from place to place composing exquisite poems in praise of the deities enshrined in the villages they visited, and set them to music. There were 63 Nayanars, who belonged to different caste backgrounds such as potters, untouchable workers, peasants, hunters, soldiers, Brahmanas and chiefs. The best known among them were Appar, Sambandar, Sundarar and Manikkavasagar. There are two sets of compilations of their songs-Tevaram and Tiruvacakam.

There were 12 Alvars, who came from equally divergent backgrounds, the best known being Periyalvar, his daughter Andal. Tondaradippodi Alvar and Nammalvar. Their songs were compiled in the Divya Prabandham.

Question 2.
Give the names of saints of Maharashtra. What were their thoughts?
Answer:
Jnaneshwar, Namdev, Eknath, Tukaram, Sakhubai and the family of Chokhamela focused on the bhakti of Vitthala (a form of Vishnu). All these were saints of Maharashtra. They rejected all forms of ritualism, outward display of piety and social differences based on birth. Some saints belonged to lower:castes. The idea of renunciation was rejected and they preferred to live with their families.

Question 3.
Give names of some important saints of the bhakti movement. Describe any two of saints.
Answer:
Important saints of the bhakti movement are Kabir, Surdas, Tulsidas, Dadu Dayal, Ravidas, Mirabai, Baba Guru Nanak etc.
Kabir: Kabir was brought up in a family of Muslim julahas or weavers near the city of Benares. His ideas are found in the form of sakhis and pads. Kabir’s verses are also in the Guru Granth Sahib, Panch Vani and Bijak which is collection of Kabir’s verses.

Kabir’s teachings openly ridiculed all forms of ; external worship of both Brahmanical Hinduism and Islam, the pre-eminence of the priestly classes and the caste system. The language of his poetry was a form of spoken Hindi widely understood by ordinary people.

Baba Guru Nanak: Baba Guru Nanak bom at Talwandi (presently in Pakistan). He established a centre at Kartarpur (Dera Baba Nanak) on the bank of river Ravi. The sacred space thus created by Baba Gum Nanak was known as dharmsal. It is now known as Gurdwara.

Gum Angad compiled the compositions of Baba Gum Nanak, to which he added his own in a new script known as Gurmukhi. The three successors of Gum Angad also wrote under the name of “Nanak” and all of their compositions were compiled by Gum Aijan in 1604. Later, this holy scripture of the Sikhs called as Gum Granth Sahib. This was authenticated by Gum Gobind Singh.

Question 1.
In the map of India represent places related to the following saints: 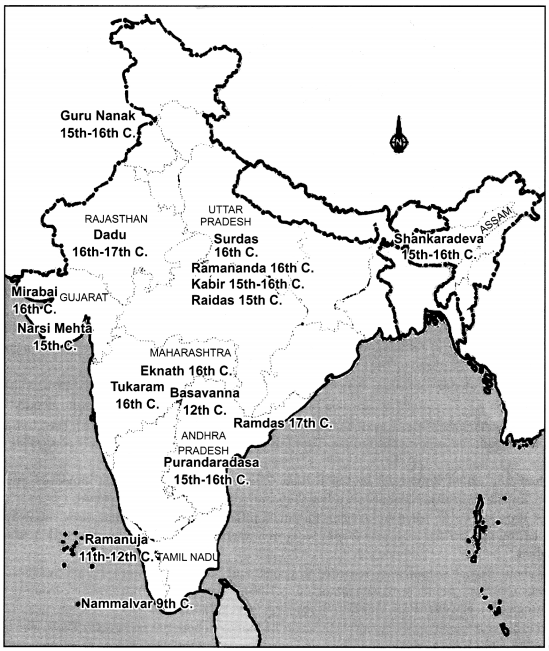