You can also practice NCERT Solutions for Class 7 Geography Chapter 4 Questions and Answers on LearnInsta.com.

Question 1.
How is good atmosphere essential for the living being?
Answer:
All living beings depend on the atmosphere, use the air for breathing and it also protects us from the harmful effects of the sun’s rays.

Question 2.
How is ail’ useful?
Answer:
Air makes the temperature on the earth livable. Without this, during the day time we feel heat and get frozen during night.

Question 3.
Name the constituents found in air?
Answer:
The constituents of air are nitrogen, oxygen, argon, carbon dioxide etc. Apart from these gases, tiny dust particles are also present in the air.

Question 5.
What is the percentage of Oxygen, Argon and Carbon dioxide in air?
Answer:
In the air oxygen, argon and carbon dioxide are 21%, 0.93% and 0.03% respectively.

Question 6.
How is nitrogen taken by the plants?
Answer:
Plants need nitrogen for their survival. They cannot take nitrogen directly from the air. Bacteria that live in the soil and roots of some plant take nitrogen from the air and change its form so that plants can use it.

Question 9.
What is global warming?
Answer:
When greenhouse gas level increases due to factory and industry’s smoke or vehicles fumes, the heat retained increases the temperature of the earth. This is called global warming.

Question 10.
What is temperature?
Answer:
The degree of hotness and coldness of the air is called temperature.

Question 11.
What is humidity?
Answer:
Moisture in the air at any place or time is called humidity.

Question 14.
What is the use of Thermometer?
Answer:
Thermometer is used for measuring the temperature.

Question 15.
What is the use of Barometer?
Answer:
Atmospheric pressure is measured by Barometer.

Question 16.
Name the instrument which is used for measuring rainfall.
Answer:
Rain Gauge.

Question 17.
How are the winds named?
Answer:
A wind is named after the direction from which it blows, e.g., the wind blowing from the west is called westerly.

Question 18.
Who invented measuring unit of temperature as degree Celsius?
Answer:
It was invented by Anders Celsius.

Question 1.
How can the level of oxygen remain constant in the atmosphere?
Answer:
Oxygen which is available in the atmosphere is generated by the plants through its photosynthesis process. Green plants use carbon dioxide to make their food and release oxygen.

The amount of carbon dioxide released by humans or animals seems to be equal to the amount used by the plants which make a perfect balance. Hence, only plants play an important role to make the balance of oxygen in the atmosphere. If we cut trees, then this balance gets disturbed.

Apart from this, burning of the fields, forests, wood, leaves etc., heat and smoke affect the atmosphere. All these releases gases on our atmosphere is disrupted and as a result imbalance of atmospheric gases is increasing day by day and living beings are facing man-made diseases.

Question 4.
What is insolation? What are its effect?
Answer:
An important factor that influences the distribution of temperature is insolation. The amount of insolation decreases from the equator towards the poles. Therefore, the temperature decreases in the same manner.

Apart from these gases, tiny dust particles are also present in the air. Nitrogen is the most plentiful gas in the air. When we inhale, we take some amount of nitrogen into our lungs and exhale it. Composition of the atmosphere can be understood from the following pie chart. 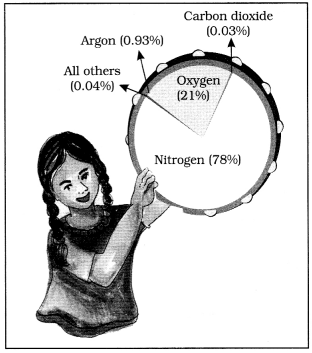 Question 2.
Describe the structure of the atmosphere.
Answer:
The whole atmosphere is divided into five layers. These include:
(i) Troposphere: This layer is most important layer of the atmosphere. Its average height is 13 km. The air we breathe exists here. Almost all the weather phenomena like rainfall, food and hailstorm occur in this layer.

(ii) Stratosphere: Above the troposphere lies the stratosphere. It extends up to a height of 50km. This layer is almost free from clouds and weather phenomena. This is most ideal for flying aeroplanes. It contains a layer of ozone gas.

(iii) Mesosphere: This is the third layer of the atmosphere. It extends upto the height of 80 km.

(iv) Thermosphere: Temperature rises very rapidly with increasing height. Ionosphere is a part of this layer. It extends between 80-400 km. This layer helps in radio transmission.

(v) Exosphere: It is the uppermost layer of the atmosphere. This layer has very thin air, light gases like helium and hydrogen float into the space from here.

(i) Due to the global warming, snow and ice begin to melt and thus sea level rises. Therefore, floods occur in the coastal areas. With the increase in the global warming, the water in the ocean warms up and it heats up the surrounding air, creating hurricanes and sea storms.

(ii) Due to the global warming, changes occurred in weather patterns and this affected as a serious public health. With the increase in the rainfall, waterborne diseases are likely to spread.

(iii) Due to the global warming, many places may face conditions of droughts. As a result food shortage may occur.

(iv) Due to the global warming, as more carbon dioxide is trapped in the atmosphere, breathable air becomes harder to come by. Thus, global warming may cause respiratory diseases.

(v) Due to the global warming, wild animals’ life may be in danger.

(vi) Due to the global warming, supply of freshwater may be disrupted. 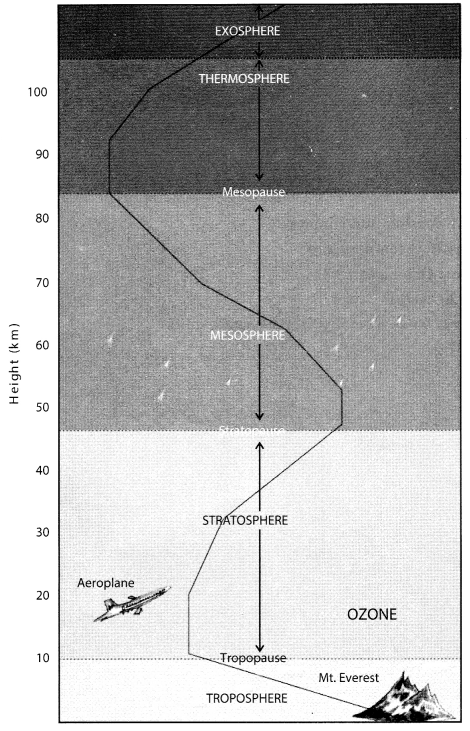