Question 1.
How do you think stereotypes, about what women can or cannot do, affect women’s right to equality?
Answer.
One of the stereotypes of our society about women is that they can be better nurses than army officers. The reason is that they are more patient and gentle. But women cannot be a scientist because it requires a technical mind which they don’t have. But there are women who have proved these stereotypes wrong.

For example Kiran Bedi, the first women IPS officer who has set a chain of records of successes in police service. Other examples, Kalpana Chawla, the first woman of Indian origin went into space after getting success in studying astrophysics. Thus, the above stereotypes of our society affect women’s right to equality.

Question 4.
Can you describe two methods of struggle that the women’s movement used to raise issues? If you had to organize a struggle against stereotypes, about what women can or cannot do, what method would you employ from the ones that you have read about? Why would you choose this particular method?
Answer.
(1) The two methods of struggle that the women’s movement used are:
Campaigning: It is an important part of the women’s movement in a planned way to achieve a certain purpose or goal. For example, a women’s campaign led the Supreme Court to formulate guidelines in 1997 to protect women against sexual harassment at the workplace and within educational institutions.

Protesting: Protesting is a method of struggle of an individual or group of people against an unfavourable law or policy. For example, women protested against the violation of women’s rights of better treatment by the husband and in-laws at home.

(2) If I had to organize a struggle against stereotypes, I would employ the campaigning method.

(3) I would choose this particular method because it raises the issues and. makes aware the people concerning to the problem, positively. It leads the decision-making authority to go in-depth about the issue.

Question 1.
Draw images of the following:
A farmer, a factory worker, a nurse, a scientist, a pilot, and a teacher. (NCERT Page 55)
Answer.

Question 2.
See what images your class drew by filling in the table below. Add up the number of male and female images separately for each occupation.

Question 4.
Read the story and answer the questions:

Question 6.
From the given table above, convert the figures of primary class children who leave school into a bar diagram. The first two percentages have already been converted for you in the bar diagram on the left. (NCERT Page 63)
Answer. 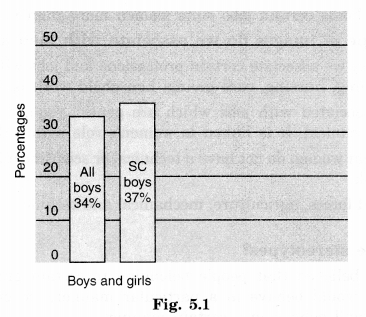