Working with the Text

Question 2.
Why did the author visit the shop so infrequently?   (Imp.)
Answer.
The author visited his shop very infrequently. It was because the boots he made lasted very long. They never seemed temporary. It seemed as if it were essence of boots stitched into them.

Question 2.
Read the following sets of words loudly and clearly. 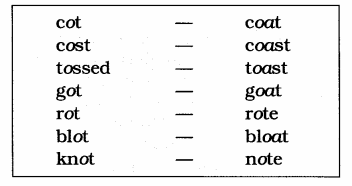 Answer.
Students should read these words themselves loudly and clearly.

Question 3.
Each of the following words contains the sound ‘sh’ (as in shine) in the beginning or in the middle or at the end. First speak out all the words clearly. Then arrange the words in three groups in the table below.

Answers.
Students should read these words first and then complete the table as follows:

Question 4.
In each of the following words ‘ch’ represents the same consonant sound as in
‘chair’. The words on the left have this sound initially. Those on the right have it finally. Speak each word clearly.

Underline the letters representing this sound in each of the following words.

Answers.
Students should read these words themselves. Then mark the following underlined letters which represent ‘ch’ sound :

Question 1.
Do you think Mr Gessler was a failure as a bootmaker or as a competitive
businessman ?
Answer.
I think Mr Gessler was a successful bootmaker. His boots were known for their quality. People waited for long for his boots. But as a competitive businessman he was a complete failure. He never made any advertisement. He took his own time in the making of boots. So he delivered the orders very late. People lost patience. It made his business flop.

Question 2.
What is the significance of the title ? To whom or to what does it refer ?
Answer.
The title ‘Quality’ is significant because this refers to the theme of the story. The whole story says that the modern age is the age of quantity and not quality. Those who produce much in quick time get success. On the other hand those who bother about the quality as Mr. Gessler did, fail. So ‘Quality’ is a very apt title for this story.

Question 4.
Speak to five adults in your neighbourhood. Ask them the following questions (in any language they are comfortable in). Then come back and share your findings with the class.
(i) Do they buy their provisions packed in plastic packets at a big store, or loose, from a smaller store near their house ?
(ii) Where do they buy their footwear ? Do they buy branded footwear, or foot wear made locally ? What reasons do they have for their preference ?
(iii) Do they buy ready-made clothes, or buy cloth and get their clothes stitched by a tailor ? Which do they think is better?
Answers.

Question 5.
Look at the picture below.
Let pairs of students talk to each other about leaving the country. One student repeats Ajit’s statement. The other gives a reason for not agreeing with Ajit. The sentence openings given below should be used.
• If I leave this country. I’ll miss …
• There are some things which you can get only here, for example… 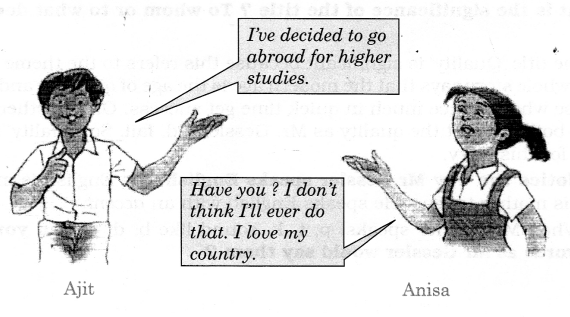 • There are some special days I’ll miss, particularly…
• Most of all I’ll miss…because…
• I think it’s impossible for me to leave my country because…
• How can you leave your own country except when… ?
• Depends on one’s intention. I can’t leave for good because…
• Maybe for a couple of years…
Answers.
For discussion at class level. One sample answer is given below :
A discussion between Rakesh and Rohit :
Rakesh    :  Hello Rohit ! Now I have decided to go abroad for higher studies.
Rohit       :  Thank God. At last you have decided it. But I don’t think so.
Rakesh    :  In fact I feel studying abroad is more fruitful. It gives perfection.
Rohit       :  I don’t agree to it. I feel there are institutions in India also which are perfect.
Rakesh    :  No I don’t feel so. No doubt, I love my country. I know when I leave I’ll miss my friends and Indian culture. Indian love and relationship is rare.
Rohit       :  I shall never think to leave my country. Indian festivals are great for me.
Rakesh    :  Leaving one’s country depends upon one’s intention. I want to go abroad for studies. I’ll stay there for only a couple of years.
Rohit       : Thanks for your good intention and love for country. I wish my best for you.

Question 1.
Based on the following points write a story.
• Your aunt has gone to her mother’s house.
• Your uncle does his cooking.
• He is absent-minded.
• He puts vegetables on the stove.
• He begins to clean his bicycle outside.
• The neighbour calls out saying something is burning.
• Your uncle rushes to the kitchen.
• To save vegetables, he puts some oil on them.
• Unfortunately, it’s machine oil, not cooking oil.
• What do you think happens to the vegetables ?
Begin like this :
Last month my aunt decided to visit her parents…
Answer.
Last month my aunt went to visit her parents. In her absence my uncle began cooking. Uncle was absent-minded. First he began with vegetable. He put it on the stove in a pot. But he forgot it instantly. He began cleaning his bicycle. He was alerted by the neighbour about something burning. The uncle rushed to the kitchen. He poured machine oil instead of cooking oil in the vegetable. It was completely spoiled. My uncle created a very confusing scene all around.