Question 1.
Why did the children go to Yasmin Khala’s house?
Answer:
The four children had broken the street light while playing a game of cricket. They wanted to know to whom should they give them money for the replacement of the light. Yasmin Khala has just retired from the Municipal Corporation and she may be knowing the answer.

Question 4.
What did Gangabai do and why?
Answer:
Gangabai and other women of her locality were very much unhappy to find garbage lying all over the street and spreading foul smell. One day she said that it is the Ward Councillor who they should go to and protest since they are the ones who elected him. She gathered a small group of women and went to his house to get their problems solved. 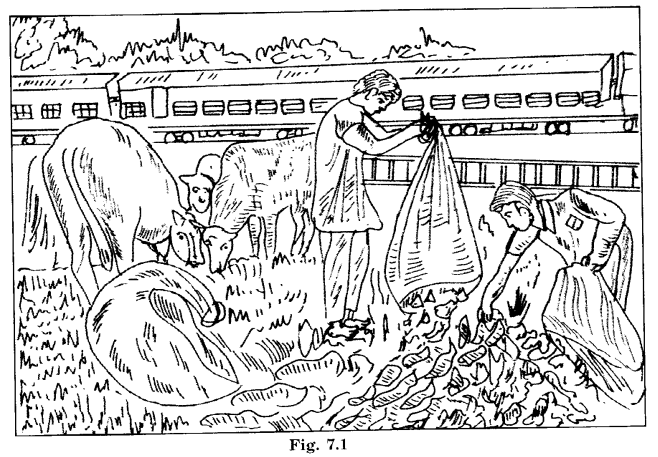 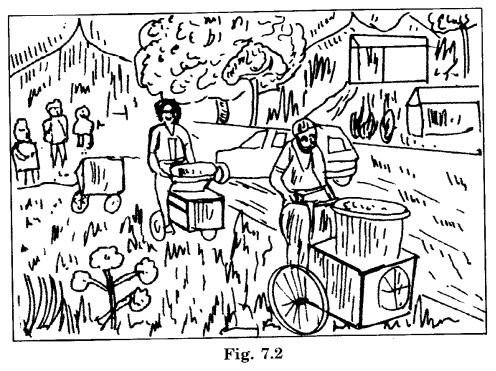 (iii) The proper way of disposing of garbage are not available to those who work in the municipalities because:

Question 7.
Several poor people in the city work as domestic servants as well as work for the Corporation, keeping the city clean. Yet the slums in which they live are quite filthy. This is because these slums seldom have any water and sanitation facilities. The reason often given by the Municipal Corporation is that the land in which the poor have set up their homes does not belong to them and that slum-dwellers do not pay taxes. However, people living in middle-class neighborhoods pay very little in taxes compared to the amount of money the corporation spends on them in setting up parks, street lighting facilities, regular garbage collection etc. Also as you read in this chapter, the property taxes collected by the Municipality makes up only 25-30 percent of its money.

Question 1.
Have you ever wondered who is responsible for running all this (civic amenities)? (NCERT Page 57)
Answer:
Yes, we have ever wondered that these services are run by the urban administration.

Question 3.
How is the planning done? (NCERT Page 57)
Answer:
Planning is done by a set procedure.

Question 5.
Read the following story and answer the questions that follow it:
One lazy Sunday afternoon Mala and her friends Shankar, Jehangir and Rehana were playing a game of cricket in the street.
Shankar had bowled a good over and although he nearly managed to get Rehana out, she was still batting. Frustrated, he bowled a short ball and hoped she would hit it for an easy catch. Instead, Rehana hit the ball so hard and so high that the street light broke.

Rehana screamed, “Oh no, look what I’ve done!” Shankar said, “Yes! we forgot to make a rule that if you break the street light you are automatically out.” But Mala, Jehangir and Rehana were more worried about what had happened and they told Shankar he’d better stop thinking about the wicket. Last week they had broken Nirmala Mausi’s window and had spent their pocket money to have it replaced.

Question 6.
Rehana’s house was the closest and they ran and told her mother what had happened. Rehana’s mother said, “I don’t really know these things in great detail but I do know that it is the Municipal Corporation of the city that takes care of replacing lights. The best person to ask would be Yasmin Khala. She just retired from the Municipal Corporation. Go and ask her, and Rehana come back home soon.”

Yasmin Khala lived in the same lane and she and Rehana’s mother were good friends. The children ran to Khala’s house and when she opened the door they began to tell her what had happened all at once! When they asked about the street light, Yasmin Khala laughed and said, “There is no one person that you can pay the money to. There is a big organisation called the Municipal Corporation that takes care of street lights, garbage collection, water supply, keeping the streets and the market clean.”

Question 7.
Fill in the blanks in the sentences below:

Question 8.
Question Box: (NCERT Page 59)
How does the Municipal Corporation get its money?
Answer:

Question 9.
Does a municipal corporation have a lot of workers?
Answer:
Yes, Municipal Corporation has several departments. Every department has numerous workers. These departments are:

Question 12.
An Event Box: (NCERT Page 61)
The city of Surat had a plague scare in 1994. Surat was one of the dirtiest cities in India. Houses, hotels and restaurants would dump their garbage into the nearest drain or street which made it very difficult for sweepers to collect and transfer the garbage into selected dumps. In addition to this, the Municipal Council did not collect the garbage as often as it should have and this led to the situation getting worse. The plague spreads through the air and people who have the disease have to he isolated. In Surat, several people lost their lives, and over 300,000 deserted the town. The scare of the plague ensured that the municipal council completely cleaned up the city. To this date, Surat continues to remain the second cleanest city in India after Chandigarh.