Question 1.
Match the following statements in a way that challenges stereotypes:

The equality of all persons is seen as a key that unites us all as Indians. The Constitution also placed responsibility on the government to take specific steps to realize that this right to equality to poor and other deprived communities.

Question 4.
Sometimes people make prejudiced comments in our presence. We are often not in a position to do anything about this because it is difficult to say something right then and there. Divide the class into groups and each group discuss what they could do in one of the following situations:

Discuss in class what the different groups have suggested for the above situations, and also talk about the problems that can come up when raising the issue.
Answer:

Question 1.
Question Box: (NCERT Page 14)
Below are some statements on people living in rural and urban areas. Tick mark those that you agree with:
On Rural People

Question 2.
What are prejudices? What does prejudice mean?
Answer:
Prejudices are our opinions which we make about certain people. Some examples are.

By prejudice we mean, “to judge others negatively and with inferiority.”

Question 3.
Look again at the statements that you believed to be true about rural and urban life in India. Do you have a prejudice against rural or urban people? Find out if this is shared by others and discuss the reasons why people have these prejudices.
Can you list some of the prejudices that you have noticed around you? How do they affect the ways in which people treat each other? (NCERT Page 14)
Answer:

Question 4.
Arrange the statements given below in these two sections, according to what you think is appropriate for the section. 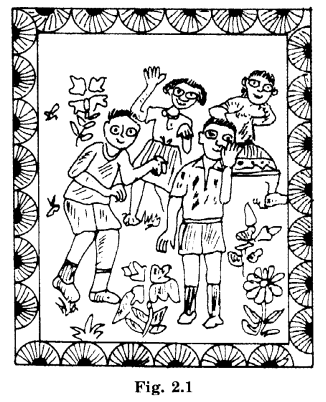 Question 5.
Now check, with your teacher’s help, who has put which statement where. Find out and discuss people’s reasons for doing this. Are the qualities you put in for boys something that boys are born with? (NCERT Page 15)
Answer:
Girls

Yes, the qualities of boys which we have put in for boys are something that boys are born with.

Question 6.
Question Box: (NCERT Page 16)
The children you see in the illustrations here were seen as ‘disabled’. This term has been changed and now the term used is ‘children with special needs. Common stereotypes about them are given in large letters. Their own feelings and thoughts to are given. 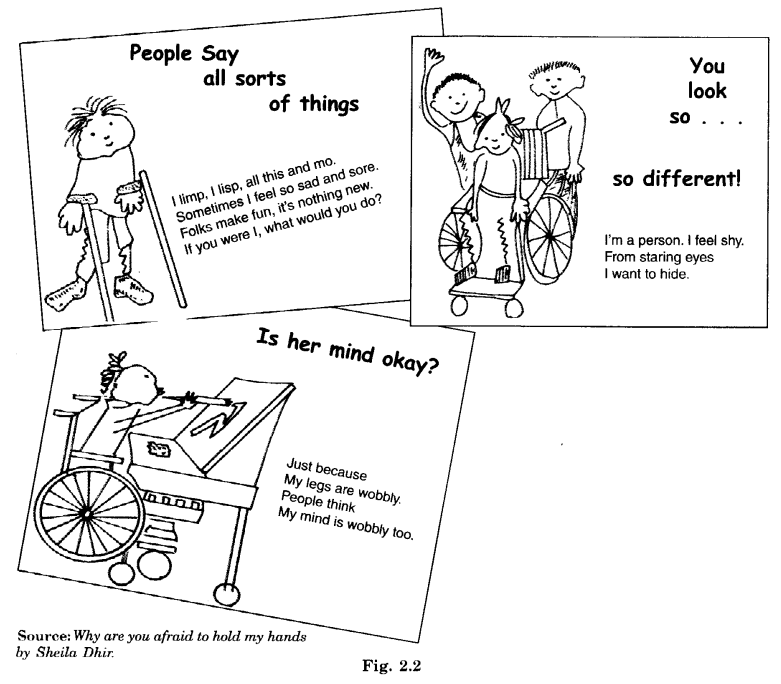 Question 7.
Question Box: (NCERT Page 17)
You can take other statements such as They are soft and gentle or They are well behaved and discuss how these are applied to girls. Do girls possess these qualities at birth or do they learn such behaviour from others? What do you think about girls who are not soft and gentle and those who are naughty?
Answer:
These characteristics are applied to girls because they are born soft, gentle. They are well behaved.

Question 8.
Question Box: (NCERT Page 18)
A common stereotype about Muslims is that they are not interested in educating girls and therefore do not send girls to school. However, studies have now shown that poverty amongst Muslims is an important reason why Muslim girls do not attend school or leave school after a few years.

Wherever effort has been made to reach education to the poor, there the Muslim community has shown an interest in sending their girls to school. For example in the state of Kerala, the distance between the school and the home is not much. There is a good government bus service that helps teachers reach schools in rural areas and over sixty percent of the teachers are women. These factors have helped children from poorer families, including Muslim girls, attend school in much larger numbers.

In other states, where such efforts have not been made children from poorer families whether Muslim, tribal, or so-called lower castes find it difficult to attend school. Therefore, poverty not religion is the cause for the non-attendance of Muslim girls in school.
Study the above extract and answer the questions given below:

Question 9.
Question Box: (NCERT Page 19)
What is the difference between discrimination and stereotype?
Answer:
Difference:

Question 10.
Question Box: (NCERT Page 21)
Despite the children offering money, the cartmen refused them. Why?
How did people at the station discriminate against Dr. Ambedkar and his brothers?
How do you think Dr. Ambedkar felt as a child when he saw the stationmaster’s reaction to his statement that they were Mahars?
Have you ever experienced prejudice or witnessed an incident of discrimination? How did this make you feel?
Read the story of Bhimrao Ambedkar and answer the following questions: