Question 1.
Locate the following States on a blank outline political map of India: Manipur, Sikkim, Chhattisgarh, and Goa.
Answer:
The states have been shown in the map on page P – 15.

Question 2.
Identify and shade three federal countries (other than India) on a blank outline political map of the world.
Answer:
Federal states — USA, Brazil, and Australia have been shown in the map on page P-16. 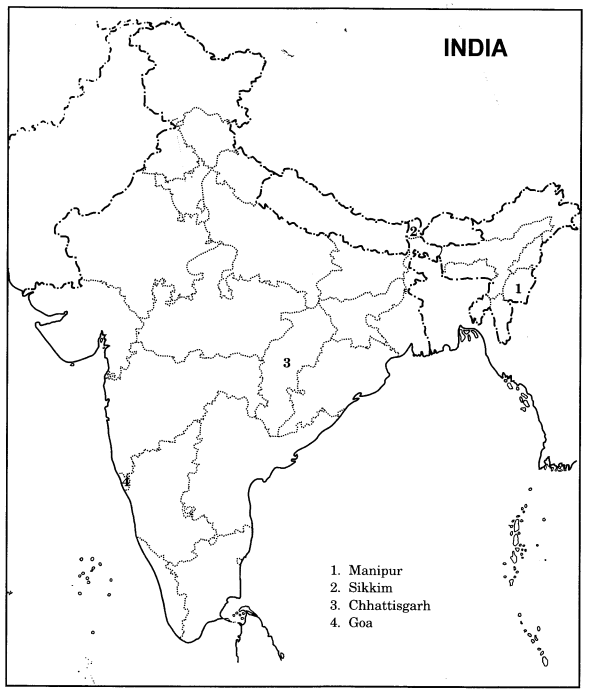 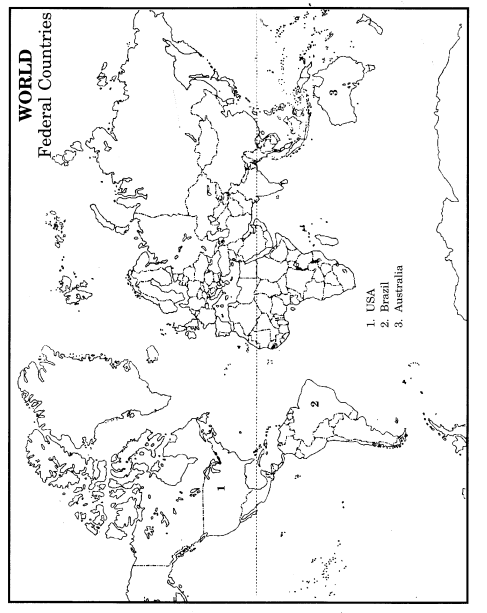 Question 3.
Point out one feature in the practice of federalism in India that is similar to and one feature that is different from that of Belgium.
Answer:
(1) Similar features: Distribution of powers –

In both the countries, power has been divided among the national government, state (provincial) government, and local governments (community govt, in Belgium).

(2) Different features: Forms of government – In Belgium in addition to Central and State government, there is a third kind of government that is community government. This is elected by people belonging to one language community – Dutch, French, and German-speaking – no matter where they live. This government deals with cultural, educational, and language-related issues. In India, there is no such government.

In India, there is a three-tier government. The third government is the local government i.e., Panchayats at the village level and Municipalities at the town level. These bodies have been given powers by constitutional amendment in 1992.
Some of the provisions of the Act are as mentioned below :

Question 4.
What is the main difference between a federal form of government and a unitary one? Explain with an example.
Answer:
Under the federal system, generally, there are two sets of government i.e., national and state. Powers are divided between the two. For example in India, there are three lists – Union list, State list, and Concurrent list. The central or national government makes laws on the subjects in the Union List. These are subjects of national importance such as defense, foreign affairs and currency.

At least one-third of all positions are reserved for women. An independent institution called the State Election Commission has been created in each State to conduct panchayat and municipal elections. The State governments are required to share some powers and revenue with local government bodies. The nature of sharing varies from State to State.

Question 6.
Fill in the blanks :

Question 7.
Here are three reactions to the language policy followed in India. Give an argument and an example to support any of these positions.
Sangeeta: The policy of accommodation has strengthened national unity.
Arman: The language-based States have divided us by making everyone con­scious of their language.
Harish: This policy has only helped to consolidate the dominance of English over all other languages.
Answer:
The position held by Sangeeta that the policy of accommodation has strengthened national unity is correct. The Central Government agreed to continue the use of English along with Hindi for official purposes to avoid the Lankan kind of situation. Otherwise, the move­ment against Hindi would have taken a more ugly turn. The promotion of Hindi continues to be the official policy of the Government of India. Promotion does not mean that the Central Government can impose Hindi on states where people speak a different language. The flexibility shown by our leaders helped our country avoid the kind of situation that Sri Lanka finds itself in. Thus the policy of accommodation has strengthened national unity. Hindi is being used along with English for official purposes.

Question 8.
The distinguishing feature of a federal government is :
(a) National government gives some powers to the provincial government.
(b) Power is distributed among the legislature, executive, and judiciary.
(c) Elected officials exercise supreme power in the government.
(d) Governmental power is divided between different levels of government.

Question 9.
A few subjects in various Lists of the Indian Constitution are given here. Group them under the Union, State, and Concurrent Lists as provided in the table below :
Defence; B. Police; C. Agriculture; D. Education; E. Banking; F. Forests;  G. Communications; H. Trade; I. Marriages.

Answer:
(d) Local governments — Residuary powers. It is not correctly matched because the residuary powers have been given to the Central Government.

Question 11.
Match List I with List-II and select the correct answer using the codes given below the lists :

(a) In a federation, the powers of the federal and provincial governments are clearly demarcated.

(b) India is a federation because the powers of the Union and State Govern­ments are specified in the Constitution and they have exclusive jurisdiction on their respective subjects.

(c) Sri Lanka is a federation because the country is divided into provinces.

(d) India is no longer a federation because some powers of the States have been devolved to the local government bodies.