Question 1.
What type of country is India -“Agricultural or industrial ? Why ? Give one reason.
Answer:
India is an agricultural country because two-thirds of its population is engaged in agricultural activities. Agriculture is a primary activity, which produces most of the food for people.

Question 2.
What are agro-based industries ? Name any two.
Answer:

Question 3.
What is other name of primitive subsistence farming ?
Answer:
It is known as ‘slash and burn’ agriculture.

Question 5.
What are the different names of ‘slash and bum’ agriculture in different countries ? Name any two.
Answer:

Question 7.
State any feature of Intensive Subsistence Farming.
Answer:
It is labour intensive farming, where high doses of biochemical inputs and irrigation are used for obtaining higher production.

Question 8.
What is the main characteristic of commercial farming ?
Answer:
Use of higher doses of modern inputs i.e., HYV seeds, chemical fertilisers, insecticides and pesticides in order to obtain higher productivity.

Question 9.
State any one example of a crop which may be commercial in one region and may provide subsistence in another region.
Answer:
Rice is a commercial crop in Haryana and Punjab but in Orissa, it is a subsistence crop.

Question 11.
What is a plantation crop ?
Answer:
In plantation crop, a single crop is grown on a large area. Plantations cover large tracts of land, using capital intensive inputs, with the help of migrant labourers.

Question 13.
Which crops are grown in rabi season ?
Answer:
Some important crops are wheat, barley, peas, gram and mustard.

Question 14.
In which states three crops of paddy are grown ? Which are they ?
Answer:

Question 16.
When does the zaid season fall ?
Answer:
Zaid season falls in between the rabi and kharif seasons during summer months.

Question 17.
What is the position of rice production of India in the world ?
Answer:
India is the second largest producer of rice in the world after China.

Question 19.
What type of crop is wheat ?
Answer:
It is a cereal crop. It is the main food crop in north and north-western part of India

Question 23.
What type of soil is required for the growth of bajra ?
Answer:
Bajra grows well on sandy soils and shallow black soil.

Question 24.
State one feature of ragi.
Answer:
Ragi is a crop of dry regions and grows well on red, black, sandy, loamy and shallow black soils.

Question 25.
State one of features of maize.
Answer:

Question 27.
Give one feature of sugarcane.
Answer:

Question 28.
Where does India stand in the production of oil seeds ?
Answer:
India is the largest producer of oil seeds in the world.

Question 33.
Where is coffee cultivated ?
Answer:
Coffee cultivation is confined to the Nilgiri in Karnataka, Kerala and Tamil Nadu.

Question 34.
Which fruits of India are in great demand in the world market ? Name any two.
Answer:

Question 36.
Which fibre is known as golden fibre ?
Answer:
Jute.

Question 38.
Name any two schemes introduced by the government of India for the benefit of the farmers.
Answer:

Question 40.
Who started Bhoodan ? What was its aim ?
Answer:

(2) It is known in different parts of the country and the world as follows :

Question 7.
What are rabi crops ? In which period of the year are they sown and harvested in India ? [CBSE 2017]
Answer:

Question 8.
In which season are rabi crops grown in India ? What are necessary conditions for its growth ? ,
Answer:
(1)

(2) Necessary conditions for growth of these crops are as mentioned below :

Question 9.
Which are important kharif crops ? When are these crops grown and where ?
Answer:

Question 10.
What is the period of zaid season ? Which crops are grown in this season ?
Answer:

Question 13.
Give a brief description of millets grown in India with their climatic conditions and producing states.
Answer:

Question 14.
Mention any two geographical conditions required for the growth of maize crops in India. Describe any three factors which have contributed to increase the maize production. [CBSE 2016-17]
Or
Give a brief description of the maize crop in India.
Answer:

Question 15.
What is the importance of pulses in our economy ? Why are pulses grown as a rotation crop ?
Answer:

(2) The major sugarcane producing states are Uttar Pradesh, Maharashtra, Karnataka, Tamil Nadu, Andhra Pradesh, Bihar, Punjab and Haryana.
(3) It is the main source of sugar, gur (jaggary), khandsari and molasses.
(4) India is the second largest producer of sugarcane only after Brazil.

(2) Linseed and mustard are rabi crops.
(3) Sesamum is a kharif crop in north and rabi crop in south India.
(4) Castor seed is grown both as rabi and kharif crop.

Question 19.
Give a brief description of coffee production in India.
Answer:

2. Fruits are produced in the following states :

Question 21.
Explain rubber cultivation in India under the following heads :
(A) Importance
(B) Geographical conditions
(C) Any two rubber producing states.
Or
Describe the climate required for the growth of rubber. Where is it grown and what are its uses ?
Answer:
(1) Importance :

(2) Geographical conditions required for the growth of rubber are as given below :

Question 21.
Name the four fibre crops grown in India. Which one of them is not obtained directly from the crops ? What is the name given to the process involved in its production ? What is sericulture ?
Ans.

(2) Uses of cotton : Cotton is one of the main raw materials for cotton textile industry.
(3)

Question 24.
Which crop is known as the golden fibre ? Explain any two geographical conditions essential for the cultivation of this crop. Mention any four uses of it.
Answer:

Question 25.
How did the partition of the country in 1947 affect the jute industry ?
Answer:

Question 28.
Why has the agriculture sector in India got a major set hack in sprite of increase in GDP growth rate ? Analyse the reasons.
Answer:

From above table it is clear that though the GDP growth is increasing over the years, it is not generating sufficient employment opportunities.
Secondly the growth rate in agriculture is decelerating which is an alarming situation. The reasons for this state of affairs are as mentioned below :

Question 30.
“Today Indian agriculture finds itself at the crossroads.” Explain and suggest steps that should be taken to improve the condition.
Answer:
After 1990, the farmers in India have faced new challenges. For example in spite of being an important producer of rice, cotton, rubber, tea, coffee, jute and spices, our agricultural products are not able to compete with the developed countries because of the highly subsidised agriculture in those countries.
Thus to make agriculture successful, the steps should be taken as mentioned below :

Question 1.
On an outline map of India show the rice and wheat producing areas.
Answer:

(1) Rice producing areas are plains of north and north-eastern India, coastal areas and the deltaic regions. In Punjab, Haryana and western UP, it needs irrigation. 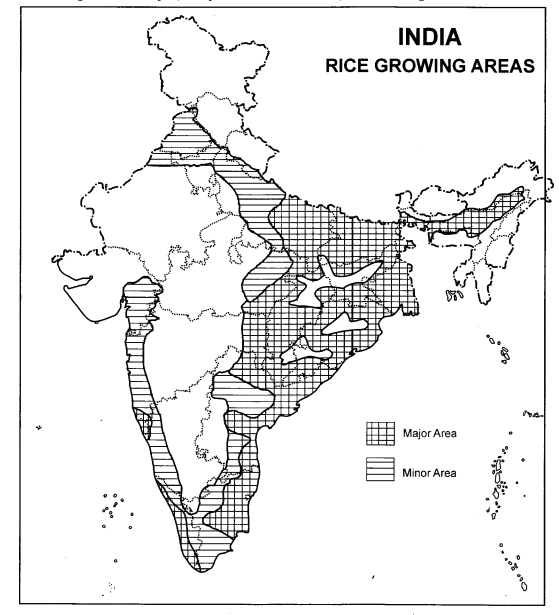 (2) Wheat producing areas are the Ganga-Satluj plains in the north-west and black soil region of the Deccan i.e., the states of Punjab, Haryana, Uttar Pradesh, Bihar, Rajasthan and parts of Madhya Pradesh.
See map given below : 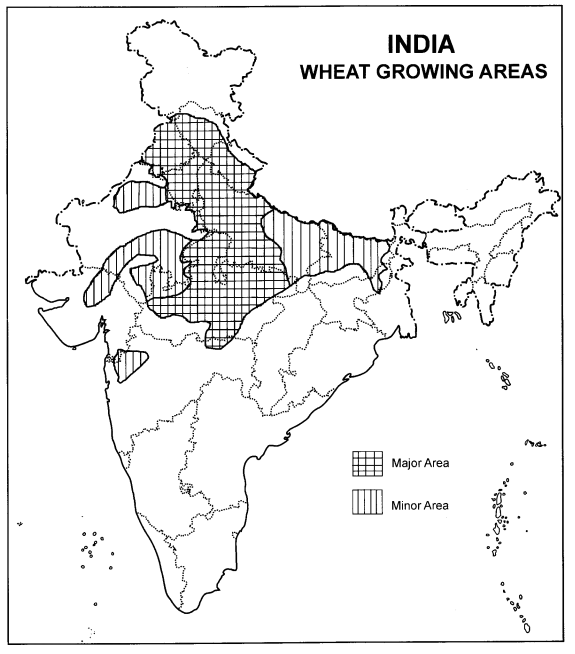 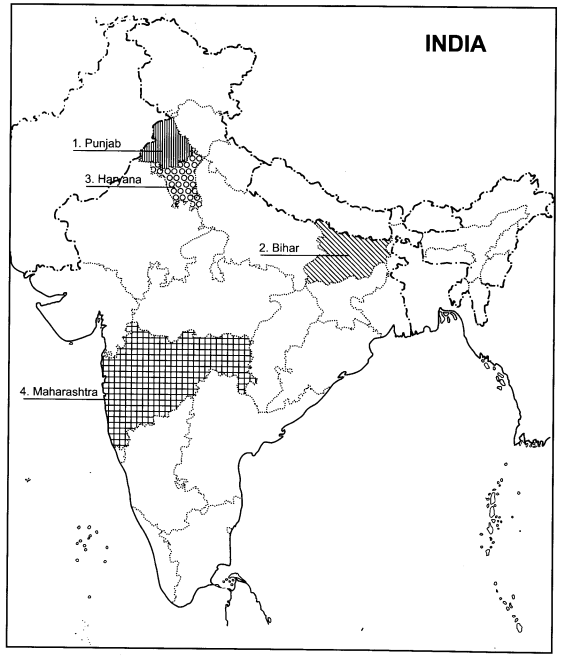