Question 1.
What kind of resource is water
Answer:
Renewable resource.

Question 2.
How much world’s water exists as oceans and fresh water ?
Answer:

Question 3.
Which are the sources of freshwater ?
Answer:

Question 4.
Which is the major source of freshwater in India ?
Answer:
Groundwater.

Question 7.
State any one reason for conservation of water resources.
Answer:
To ensure food security because water is needed for production of crops.

Question 8.
State any two sources from which freshwater can be obtained under the hydrological cycle.
Answer:

Question 9.
In whose kingdom in ancient India, dams and lakes were built ?
Answer:
During the time of Chandragupta Maurya, dams, lakes and irrigation systems were extensively built.

Question 10.
What is a dam ?
Answer:
A dam is a barrier across flowing water that obstructs, directs or retards the flow, often creating a reservoir, lake or impoundment.

Question 12.
What did Nehru say about dams and why ?
Answer:
Jawaharlal Nehru proudly proclaimed the dams as the ‘temples of modern India’ because the dams would integrate development of agriculture and the village economy with rapid industrialisation and growth of the urban economy.

Question 16.
Which river is called as ‘river of sorrow’ ?
Answer:
Damodar River.

Question 18.
Which state governments have raised objections over the diversion of more water and where ?
Answer:
Karnataka and Andhra Pradesh governments have raised objections regarding the diversion of more water of Koyna by the Maharashtra government for a multi-purpose project. The reason was that this would reduce downstream flow in their states with adverse consequences for agriculture and industry.

Question 20.
Which are the two social movements that have been started against multi-purpose projects ?
Answer:

Question 22.
Who gets benefits from multi-purpose projects ? State any two sections of society
Answer:

Question 23.
What is an ecological consequence of irrigation under multi-purpose projects ?
Answer:
Salinisation of the soil that has transformed the social landscape i.e., increasing the social gap between the richer landowners and the landless poor.

Question 25.
Give any one example of rainwater harvesting system in ancient India.
Answer:
In the hill and mountainous region, people built diversion channels like the ‘guls’ or ‘kuls’ of the Western Himalayas for agriculture.

Question 28.
What are tankas ?
Answer:
Tankas are underground tanks for storing drinking water.

Question 29.
What was length and breadth of a tank in Phalodi ?
Answer:

Question 30.
What is remarkable about Gendathur a remote backward village in Mysore ?
Answer:
Nearly 200 households have installed rooftop rainwater harvesting system to meet r their water needs. The village has earned the rare distinction of being rich in rainwater.

Question 2.
In Israel average annual rainfall is 25 cm but there is no shortage of water but in India, average rainfall is 114 cm but here we find drought in one region or the other every year. Why ?
Answer:
In Israel large scale projects to desalinate sea water, direct water from rivers and reservoirs in the north, make optimal use of groundwater and reclaim flood overflow and sewage have been undertaken. On the other hand, in India there is no proper arrangement of using rainwater. As a result of it, most of the water flows in to drains and to the sea. The rainy season is only for three months. Thereafter there is no rain for remaining nine months. As a result of these conditions we, in India, face shortage of water.

Question 3.
Explain three causes of water scarcity.
Or
Water scarcity in most cases is caused by over-exploitation, excessive use and unequal access to water among different social groups.” Explain the meaning of statement with the help of
examples. [CBSE 2016-17]
Answer:
The statement means that there are various reasons for the scarcity of water as mentioned below :

(2) Four objectives of multipurpose projects are as given below :

Question 8.
What is a dam ? How are they classified ?
Or
What is a dam ? Describe the classification of dams on the basis of their structure and materials used and height.
Answer:
(1) A dam is a barrier across flowing water that obstructs, directs or retards the flow, often creating a reservoir, lake or impoundment. It has a section called a spillway or weir over which or through which water flows intermittently or continuously.
(2)

(2) Big rivers : These rivers have been affected by the following factors :

Question 10.
What is a multi-purpose river project ? Give four objectives of these projects ?
Answer:
(1) Dams are referred to as multi-purpose projects where the many uses of the impounded water are integrated with one another. Dams are now built not just for irrigation but for electricity generation, water supply for domestic and industrial uses, flood control and recreation.
(2) The objectives of the projects were as mentioned below :

Question 13.
What is rooftop rainwater harvesting system ? In which state is it compulsory to follow this system ?
Answer:
(1) Rooftop rainwater harvesting means the rainwater that falls on the sloping roofs of houses is taken through pipe into an underground tanka (circular holes in the ground), built in the main house or in the courtyard.
(2) In the semi-arid and arid regions of Rajasthan, particularly Bikaner, this practice was followed.
(3)

Question 14.
What is Bamboo Drip Irrigation system ?
Answer:
In Meghalaya, a 200-year-old system of tapping stream and spring water by using bamboo pipes is prevalent. About 10-20 litres of water enters the bamboo pipe system, gets transported over hundreds of meters, and finally reduced to 20-80 drops per minute at the site of the plant. Bamboo pipes are used to divert perennial springs on the hilltops to the lower reaches by gravity. 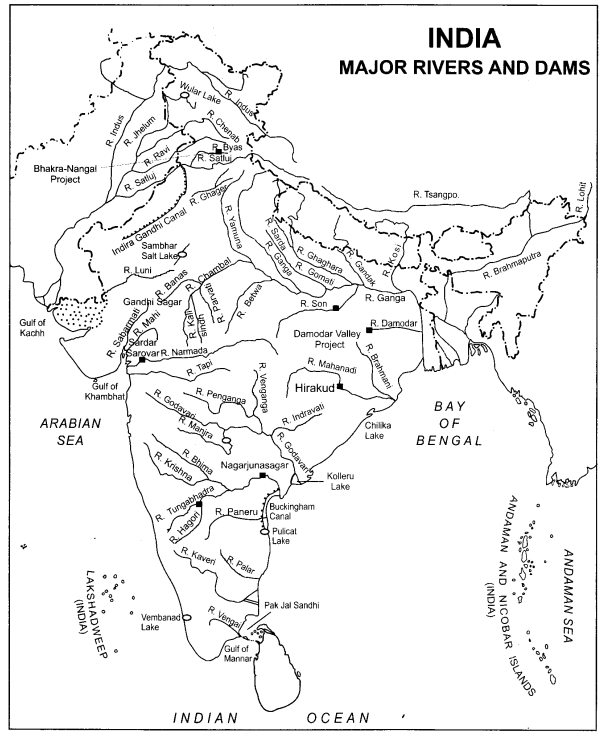