Students who are going to appear for CBSE Class 12 Examinations are advised to practice the CBSE sample papers given here which is designed as per the latest Syllabus and marking scheme as prescribed by the CBSE is given here. Paper 2 of Solved CBSE Sample Paper for Class 12 Biology is given below with free PDF download solutions.

Question 1.
Observe the pedigree chart and answer the following questions:
(a) Identity whether the trait is sex linked or autosomal.
(b) Give an example of a disease in human beings which shows such a pattern of inheritance.

Question 2.
Identify the reason for the selection of DNA polymerase from Thermus aquaticus for Polymerase Chain Reaction

Question 3.
Govt, of India has raised the marriageable age of females to 18 yrs and of males 21 yrs. Suggest any two measures adopted by the government for the purpose.

Question 4.
Thymus of a new born child was degenerating right from birth due to genetic disorder. Predict its two impacts on the health of the child.

Question 5.
Give an example of a chromosomal disorder caused due to non-disjunction of autosomes

Question 7.
A single pea plant in your kitchen garden produces pods with seeds, but the individual papaya plant does not. Explain.

Question 9.
Name a genus of baculovirus. Why are they considered good biocontrol agents?

Question 10.
Explain the relationship between CFCs or Ozone in the stratosphere.

Why are sacred groves highly protected?

Question 11.
Why is breast feeding recommended during the initial period of an infant’s growth? Give reasons.

Question 12.
Give an example of an autosomal recessive trait in humans. Explain its pattern of inheritance with the help of a cross.

Question 13.
Describe the experiment that helped Louis Pasteur to dismiss the theory of spontaneous generation of life

Question 15.
Suggest and describe a technique to obtain multiple copies of a gene of interest in vitro.

Question 16.
What is GMO? List any five possible advantages of a GMO to a farmer.

Question 17.
During a school trip to ‘Rohtang Pass’, one of your classmate suddenly developed “altitude sickness”. But, she recovered after sometime.
(a) Mention one symptom to diagnose the sickness.
(b) What caused the sickness?
(c) How could she recover by herself after sometime?

Question 18.
How has RNAi technique help to prevent the infestation of roots into tobacco plants by nematode Meloidegyne incognitia?

Question 19.
“In a food chain, a trophic level represents a functional level, not a specie.” Explain. 3

Question 20.
Prior to a sports event, blood and urine sample of sports person are collected for drug tests.3
(a) Why is there a need to conduct such tests?
(b) Name the drugs the authorities usually look for.
(c) Write the generic names of two plants from which these drugs are obtained.

Question 21.
Describe the experiment that helped to demonstrate the semi conservative mode of DNA replication.

Question 23.
Reproductive and Child Flealthcare (RCH) programme are currently in operation. One of the majof tasks of these programmes is to create awareness amongst people about the wide range of reproduction related aspects. As this is important and essential for building a reproductively healthy society.
(a) “Providing sex education in schools is one of the ways to meet this goal.” Give four points in support of your opinion regarding this statement.
(b) List any two ‘indicators’ that indicate a reproductively healthy society.

Question 24.
(a) Explain the post-pollination events leading to seed production in angiosperms.
(b) List the different types of pollination depending upon the source of pollen grains.

(c) Briefly explain the events of fertilisation and implantation in an adult human female.
(d) Comment on placenta as an endocrine gland.

Question 25.
(a) How are the following formed and involved in DNA packing in a nucleus of a cell? 5

(b) Differentiate between Euchromatin and Heterochromatin.

Question 26.
(a) Why should we conserve biodiversity? How can we do it?
(b) Explain the importance of biodiversity hot spots and sacred groves.

Answer 2.
Identify the reason for the selection of DNA polymerase from Thermus aquaticus for Polymerase Chain Reaction.

Answer 3.
Incentives given to couples with small families/media publicity – posters of happy couples with two children (slogan-Hum Do Humare Do)/Motivate to promote smaller families by using contraceptive methods. (Any two)

Answer 4.
Thymus provides micro-environment for the development and maturation of T-lymphocytes; its degeneration will weaken the immune system so the child will be prone to frequent infections.

Papaya: Dioecious plant/unisexual plant bearing male and female flowers on separate plants, unable to produce viable seeds as there is no cross pollination/it could be a male plant which is unable to produce fruit and seeds.

Answer 7.
Stop codon: does not code for any amino acid/terminates the synthesis of polypeptide chain. Unambiguous codon: one codon codes for one amino acid only
Degenerate codon: some amino acids are coded by more than one codon
Universal codon: genetic code is same for all organisms (bacteria to humans)

Sacred groves are highly protected because of religious and cultural traditions, refuge for large number of rare and threatened plants/ecologically unique and biodiversity rich regions.

Answer 11.
Colostrum, rich in nutrients, rich in antibodies/rich in IgA/provide passive immunity/provides :immunity to new born/helps to develop resistance in new born/readily available for new born? hygienic/develops a bond between mother and child.

Similar cross can be considered for any other trait mentioned above. 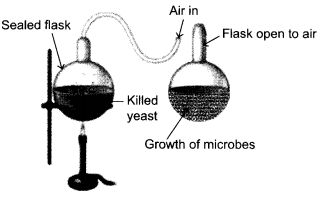 Two pre sterilised flasks with killed yeast, one sealed, other open to air, differential growth of life in two flasks/life was found only in open flask. The given diagram can be considered in lieu of above explanation.
Life comes from pre-existing life (it came from air entering the flask)/proved the theory of biogenesis.

Answer 15.
PCR/Polymerase Chain Reaction.
Separation/ denaturation of two strands of two dsDNA, using two sets of primers / small chemically synthesised oligonucleotides complementary to regions of DNAand (thermostable) DNA polymerase/Taq polymerase, extension of the primers, by enzyme using nucleotides replicates the DNA and if the process of replication is repeated many times, multiple copies of DNA are produced.
The following diagram can be considered in lieu of the explanation. 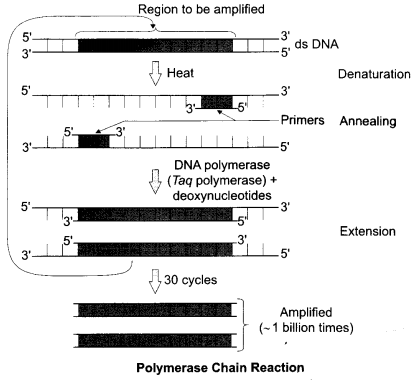 Answer 19.
Position of a species in any trophic level is determined by the function performed by that mode of nutrition of species in a particular food chain. A given species may occupy more than one trophic level in the same ecosystem (in different food chains) at the given time. If the function of the mode of nutrition of species changes its position shall change in the trophic levels, same species can be at primary consumer level in one food chain and at secondary consumer level in another food chain in the same ecosystem at the given time.

Answer 21.
Matthew Meselson and Franklin Stahl grew E.coil in 15NH4C1 for many generations to get 15N incorporated into DNA. Then the cells are transferred into 14NH4C1. The extracted DNA are centrifuged in CsCl and measured to get their densities, DNA extracted from the culture after one generation (20 minutes), showed intermediate hybrid density, DNA extracted after two generations (40 minutes) showed light DNA and hybrid DNA.

A correctly labelled diagrammatic representation in lieu of the above explanation of experiment to be considered. 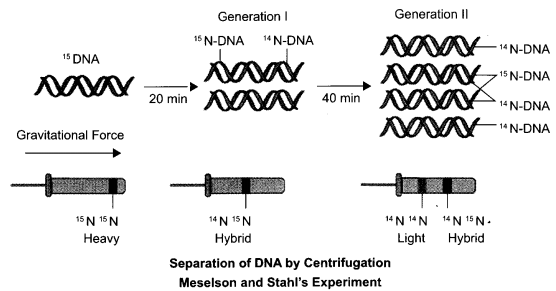 Lactose/inducer binds with repressor protein, inactivates it, frees operator gene, RNA polymerase freely move over structural genes/RNA polymerase access to the promoter, transcribing to, lac mRNA, which on translation, produce transacetylase, permease, β-galactosidase.
The following diagram to be considered in lieu of above explanation.

(b) Hot spots – regions with high level of species richness, high degree of endemism Sacred groves – tracts of forest containing tree/wildlife were venerated, and given total protection/to protect last refuges for a large number of rare and threatened plants.

(b) Planning of health/ education/transport/ infrastructure/finance/food/employment can depend on the age-pyramid analysis of a population. (Any two explanations)